We’ll start with annual average sea ice extent. Not all years are covered completely, especially this year because it isn’t over yet. So we’ll do two things to improve the situation. First, we’ll transform extent to extent anomaly to remove the average annual cycle. Second, rather than have the final data point (for 2015) be less precise simply because it has less data, we’ll average over years from October through the following September. We’re still computing one-year averages, and the sea ice doesn’t really care when we choose to start our calendar.

And here they are:

The downward trend is quite clear. And yes, it can (easily) be confirmed statistically — it’s not just a visual impression.

But there’s also a visual impression of more than just a linear decline. This can be confirmed in multiple ways, including changepoint analysis, which finds not one but two changes in the trend rate. Let’s plot a smooth curve fit to the data in red, and a piecewise-linear fit estimated by changepoint analysis in blue:

One thing is for certain: there’s no validity to any claim of “recovery.” For one thing, evidence that the current trend is upward (rather a necessity for “recovery”) just isn’t there. For another thing, annual average sea ice extent is not only still well below what it was 30 years ago, it’s well below what it would have been had the downard trend at that time continued unabated: 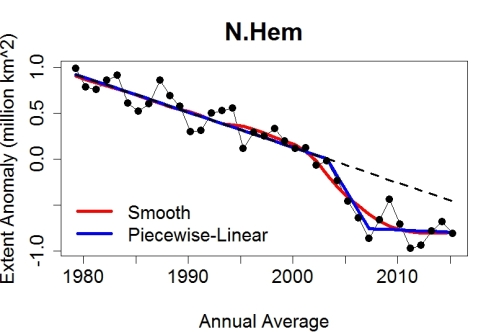 Many people focus on the annual minimum of sea ice extent. Here’s that data:

Again an overall downtrend is clear (and again, easily confirmed statistically). This time, changepoint analysis can only confirm one rate change, but a smooth suggests more might be going on:

Statistically, the issue can’t be decided using just this data. Part of the reason is that the annual minima have a higher noise level than annual averages. This is well indicated by the standard deviation of the residuals from smooth fits and piecewise-linear models; for annual averages it’s only about 0.13 million square kilometers, but for annual minima it’s about 0.45, more than three times as large.

We shouldn’t give short shrift to the annual maxima. Here they are: 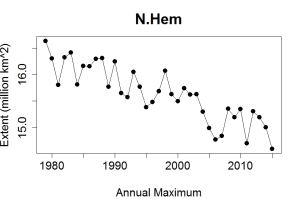 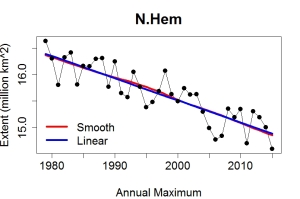 All we can say for sure is that it was trending downward, and all the evidence points to the fact that it still is. By the way, the noise level for the annual maxima is about 0.26 million km^2, more than for annual averages but less than for annual minima.

Probably one of the reasons for the differing behavior between annual minima and maxima is latitude dependence. There’s probably more to the story as well, but I’m not qualified to opine on that.

Perhaps we’ll have a comment about this from Ron Clutz. I’m interested in knowing whether or not he really meant it when he titled his blog “Science Matters.”