Wouldn’t you know it, I just posted about how dumb it is to talk about “trends” without enough data to talk about trends intelligently, when it’s brought to my attention that there’s yet another example of doing just that.

Once again the trick is to use data that only covers a brief span of time — in this case less than 10 years — while ignoring data that cover a longer span of time. Then use the too-brief data to talk about how the trend is going your way. Add a bogus rookie mistake for good measure.

Here’s the data used, from MASIE:

Yeah, it doesn’t start until 2006. Which makes it downright bizarre to use this for studying climate, for two reasons. First, we have data (passive microwave from satellites) covering quite a bit more time — starting in late 1978. Second, the MASIE people themselves tell you that their product isn’t the best for climate studies, instead you should use that passive microwave data from satellites:

“If one is interested in long-term trends in sea ice or how it responds to changing climate forcing, generally, it is best not to use an operational product, but rather one that is consistently produced and retroactively quality controlled. The NSIDC Sea Ice Index monthly ice extent, and the satellite passive microwave data sets upon which it is based, is one example.”

So why did Ron Clutz decide to use MASIE data instead? You make the call…

For the time span in question, it doesn’t make a whole lot of difference. Here’s the MASIE data again, but this time I’ll add the passive microwave satellite data from NSIDC as a red dashed line: 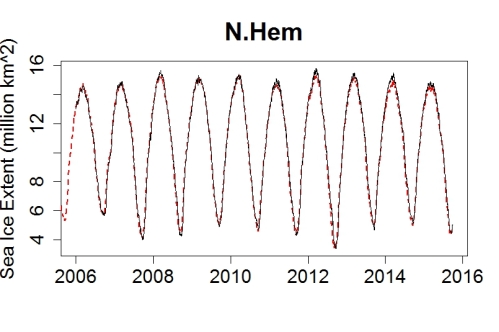 Here’s a comparison of those two data sets over a longer span of time: 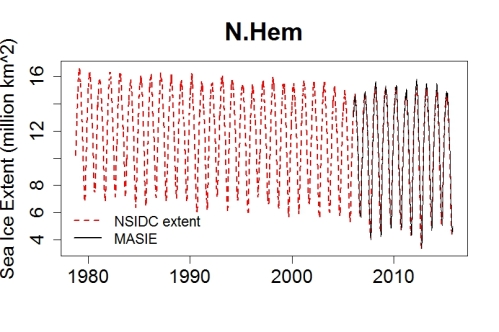 Kinda looks like the ice has been decreasing, doesn’t it?

He then goes on to announce that there’s an “increasing trend.” I don’t think he knows much about trends.

I can compute yearly averages too. I got this: 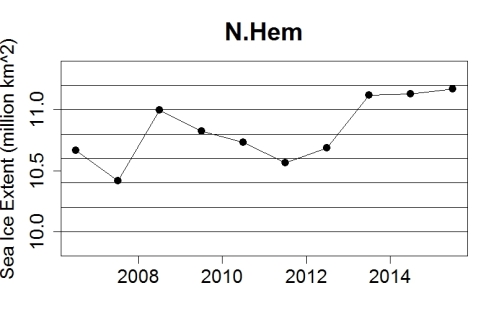 Do you notice a difference? Yes, the latest value (for 2015 so far) is lower than Clutz shows. Y’know why? Because his blog post was two days ago. In the meantime, MASIE has added a couple more days’ data. Why, you may be wondering, would a mere couple of days make such a difference? Because this is the time of year that sea ice extent is low.

When Clutz averaged 2015 “so far,” of course he left out data from now (from a couple of days ago, actually) to the end of the year. The funny thing is, the way the seasonal cycle goes, during the time he left out ice extent tends to be below average — on average, that is. During the time he did includ it tends to be above average — on average, that is. It’s kinda like computing the year’s average temperature, but leaving out winter and only including summer. Not exactly like that, mind you, but the essential error is the same.

And that, on the part of Ron Clutz, is a rookie mistake.

If you really want to compute a yearly average including a year that isn’t complete, for data that show a seasonal cycle, you need to transform the raw data to anomaly data. Let me do that for Ron Clutz:

Now we can get some honest yearly averages. For the last one (2015) the year is incomplete, so it won’t be as precise as preceding years, but it least it won’t be biased high by a rookie mistake:

But the most important bogus mistake in Ron Clutz’s post is his talk about “recovery” and “trend.” One wonders, did he bother to compute what the trend is and what its uncertainty is? Because this case is yet another example for which, when you do that, you find out that the estimated trend from such a short time span is meaningless.

What if we used more data? The data recommended by the MASIE people? Why, we’d see this (using anomalies for annual averages):

Does it look like it’s in recovery to you?

Claiming recovery based on a meaningless “trend” and a rookie mistake, using an all-too-brief data set whose creators advise you to use something different for climate studies, is rather ironic. But perhaps the most ironic part of Ron Clutz’s blog post is the name of his blog: “Science Matters”

42 responses to “Epidemic of Denial”