On Ice with a Twist

Thanks to reader “DrC” for the tip about a new paper which takes a new view of variations in arctic sea ice. Most of us are familiar with the usual measures of sea ice. Using satellites we can estimate both sea ice area, which is the area of the sea which is ice-covered, and ice extent, which is the area of ocean which has 15% or more ice cover. Both measures are commonplace, perhaps extent is a bit more commonly reported. It’s easy to get daily up-to-date data on arctic ice extent from JAXA, and on arctic ice area from cryosphere today.

Those who study ice extent (or area) data in detail will notice two things. First, the yearly pattern of changes is asymmetric between winter and summer; the winter maximum tends to be more flat-topped while the summer minimum is more pointy. Second, the trend (since satellite observations begin in the late 1970s) is strongly season-dependent; the decline in winter maximum has been much less rapid that of the summer minimum. This has caused much speculation about the reasons for these seasonal asymmetries.

But the new paper by Ian Eisenman (2010, Geographic muting of changes in the Arctic sea ice cover, Geophys. Res. Lett., 37, L16501, doi:10.1029/2010GL043741) illustrates that the seasonal differences may be — I’m tempted to say probably are — due to geography. During summertime, arctic sea ice has retreated to such high latitudes that it’s almost entirely in open ocean. In that case a small move south, i.e. a small change in its latitude extent, corresponds to a large increase in ice area or extent. As ice grows in autumn and winter, of course it extends further and further south. But it soon extends to latitudes where there can’t possibly be very much sea ice, simply because there’s not that much sea — the arctic ocean is surrounded by land.

If true, Eisenman’s hypothesis means that winter ice extent (and area) is to a large degree limited by geography, i.e., by the placement of the circumpolar land masses. It can still shrink and expand, but not as much as summer ice because there’s simply not as much ocean at the “available” latitudes during non-summer seasons.

Eisenman decided to characterize the growth and decay of sea ice, not by its area or extent, but simply by its latitude — how far south, on average, does the ice extend? For each day of satellite data, he estimated the average latitude of the southern border of the ice, but only where it changes from ice to sea — ice that is limited by land masses doesn’t figure into the calculation. This gives him the average latitude of the ice/open-ocean boundary. The idea is that perhaps the forces governing change of arctic ice cover determine how far north or south the ice/ocean boundary extends, more directly than they determine how much area is covered by sea ice. You can get Eisenman’s latitude data here.

Especially evident is the difference between March and September shown in part B, and the different montly trends shown in part C. In his figure 3 Eisenman shows the same analysis, but in terms of latitude rather than extent:

Using this variable, the trends in winter and summer are far more alike, in fact they’re more similar than different. During both seasons (and in fact throughout the yearly cycle), the trend in latitude of the ice/open-ocean boundary has been to recede northward about 8 km/yr since satellite observations began.

One thing I dislike about Eisenman’s analysis is that when analyzing extent, he epresses trends in terms of percentage changes rather than absolute (i.e., km^2) changes. This exaggerates the summertime trends compared to winter simply because summer extent is so much lower than winter extent. The difference is not so dramatic when one deals with extent trends in terms of simple areas: 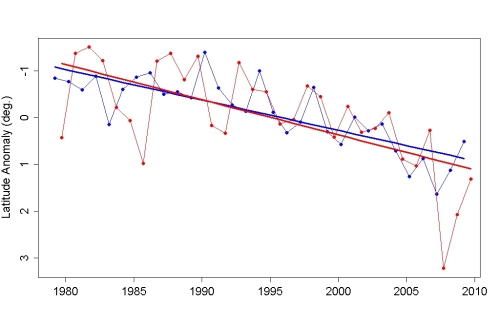 Likewise, the rates for all months are not so dramatically different when one deals with extent trends in terms of simple areas rather than percentages: 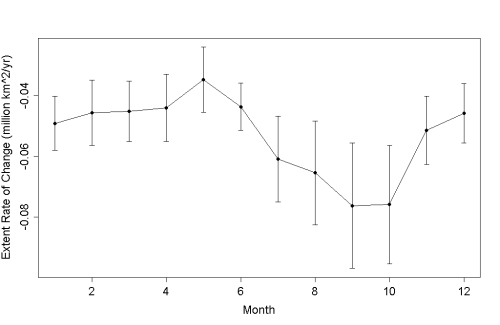 But again, the monthly trends are much more similar in terms of latitude: 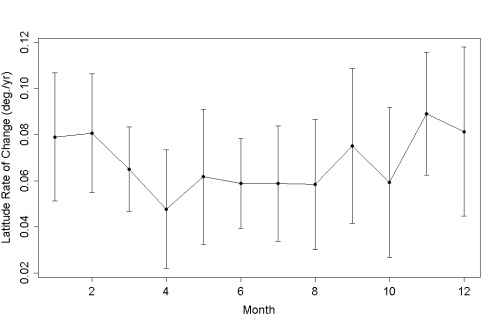 In fact, the differences in latitude trends between different months are not statistically significant.

Studying the advance and retreat of arctic sea ice in terms of its latitude range rather than area or extent seems to me to make perfect sense, and to compensate for the highly uneven distribution of land mass in the northern hemisphere. In fact it seems to me to be one of those ideas which is obviously the right thing to do — but only after someone else has thought of it! My compliments to Eisenman for his insight.

21 responses to “On Ice with a Twist”