Larry Hamlin has shown us all, in a post at WUWT, how warped and twisted is the thinking of those who call themselves “skeptics” about climate change, but are actually deniers.


This one is about sea level rise. The headline reads “30 years of NOAA tide gauge data debunk 1988 Senate hearing climate alarmist claims.” The theme is that James Hansen’s 1988 testimony (when he warned of the danger of climate change) was “alarmist” and that NOAA data (about sea level, taken from tide gauges) over the last 30 years “debunks” something.

What, you might wonder, does the last 30 years of NOAA tide gauge data debunk? According to Hamlin, it’s this:

So that’s it! Hamlin is claiming that data from the last 30 years fails to show any sea level rise acceleration, anywhere in the U.S. or island groups.

How did Hamlin determine that the new data (since 1988) fail to show acceleration? That’s a bit harder to figure out. He does give us a clue, however, by highlighting the longest tide gauge record we have:

The longest NOAA tide gauge data record is at the Battery, New York with a 162 year long measurement period. This location along with all other NOAA U.S. coastal locations show no sea level rise acceleration occurring over the past 30 years despite scientifically flawed assertions otherwise by climate alarmists.

Maybe you’re not convinced. But wait — he shows a graph!

Since Larry Hamlin puts such faith in actual data, let’s look at what this graph shows: the actual data.

Note that the top of Hamlin’s graph (it’s actually from NOAA, not from Hamlin himself) says the average rate of sea level rise during the entire time span is 2.85 mm/yr. What say the last 30 years’ data? This: 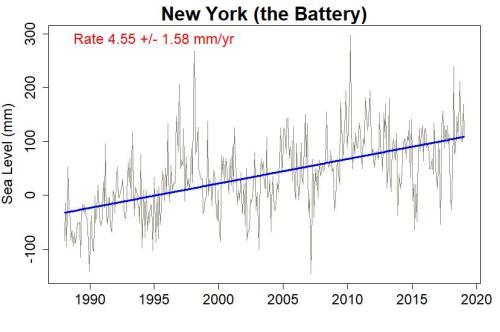 What do we call it … ? … when the rate of increase gets higher … ? … what’s the name for that? Oh yeah! It’s called acceleration.

If you want more proof, I’ve got oodles. If Larry Hamlin himself comments here and asks, I’ll be delighted to show how wrong he is in another six ways. As for the 2nd graph from Hamlin (actually from NOAA, he didn’t make it himself): if he comments here himself and asks, I’ll be happy to show him why that too is a nothing-burger. In fact, for his purpose it’s a “not-even-wrong” burger.