Time is Short for the Carbon Budget

The “carbon budget” is an estimate of how much CO2 we can still emit, but still have a good chance to keep global warming from going over the 1.5°C limit into “dangerous” territory. The budget has recently been revised (upward, thank goodness) to about 420 GtCO2 (420 billion tons of carbon dioxide).

Staying within the 1.5°C limit doesn’t make us “safe” — there are still consequences of climate change, dangerous and costly, and we’re already paying the price despite not having hit 1.5°C yet. But going above 1.5°C takes us into what is best described as: nobody wants to go there.


If all of the “budget” amount of 420 GtCO2 went into the atmosphere, it would raise CO2 concentration by 50 ppm (parts per million). But when we emit CO2, only about half of it remains in the air. The other half is absorbed, mainly by the oceans and by plant life. So, our 420 GtCO2 budget translates to an increase of about 25 ppm in atmospheric concentration.

The air right now has about 410 ppm CO2. Adding another 25 will bring that number up to 435 ppm. In my opinion, that’s the number we should be looking at. Instead of a 420 GtCO2 emissions budget, we should be talking about a 435 ppm CO2 concentration limit.

That’s the kind of limit we can actually keep track of, with precision and accuracy.

We’ve been monitoring CO2 concentration continuously since 1958, with the groundbreaking work of Charles Keeling. And what have we found? Here’s the data from the Mauna Loa atmospheric observatory in Hawaii: 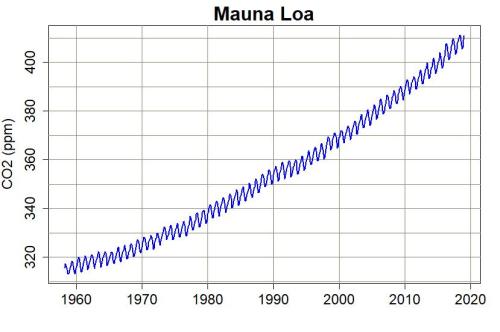 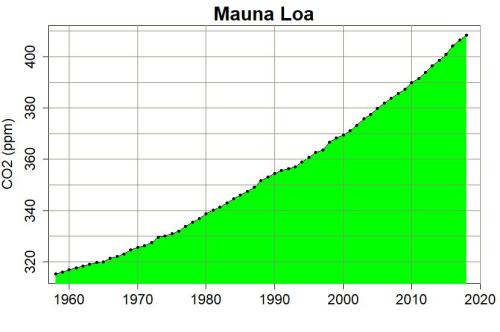 Yes, it’s going up. That’s because of us. Worse yet, the increase has been getting faster and faster.

Here’s the same data (yearly averages), but with the scale expanded so I can show where the carbon budget is (using my “concentration” budget, not the “emissions” budget): 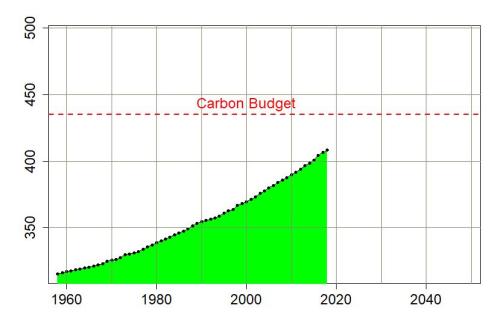 Now for the kicker: let’s look at what the CO2 concentration will be if we keep on doing what we’re doing: 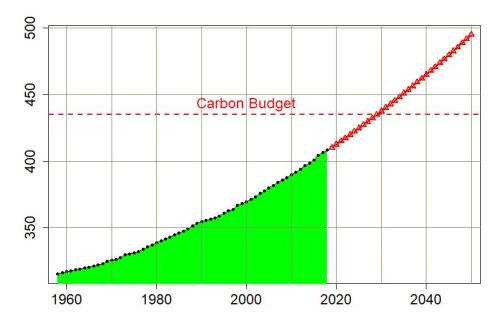 Notice that we’ll exhuast the “carbon budget” in the year 2029.

That doesn’t mean temperature will hit the 1.5°C limit that year. There’s lag in the system, so it’ll be another decade or so for temperature to catch up. But catch up it will.

We have ten years to change our path. If we keep going like we’re going, then not only will we hit the limit soon, we’ll have so much momentum going it’ll be nearly impossible to avoid even worse…

18 responses to “Time is Short for the Carbon Budget”