Not long ago Watson et al. compared satellite sea-level data to estimates from tide gauges. They concluded that the satellite data show systematic drift, which is satellite-specific, most strongly affecting the first six years’ observations.

Of course land-based tide gauges require correction for the rise and fall of land itself, vertical land movement (VLM), and they used two methods to do so. One is based on a model of Glacial Isostatic Adjustment (GIA model based), another uses GPS estimates (GPS based). Both models suggest satellite drift, strongest early.

On this basis they estimated an adjustment to correct for the systematic bias. Here are the revised data sets (in red and blue) compared to the un-adjusted (in black): 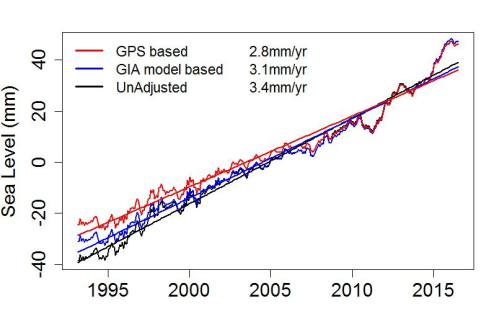 The revisions lower the overall rate of sea level rise; without them the estimate is about 3.4 mm/yr, but with GIA model based adjustment it’s only 3.1 mm/yr, with GPS based adjustment merely 2.8 mm/yr.

What I find fascinating is to remove the estimated linear trend from these data and look at what’s left over — the residuals. If I do this with the un-adjusted data, I see this departure from its straight-line pattern: 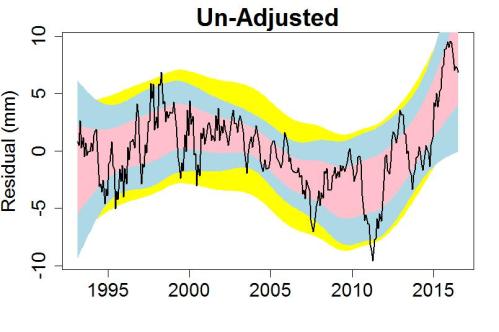 I could make a good argument that these data show both acceleration (recently) and deceleration (earlier), while I’d also argue they could be random flucutations at longer time scales. But the same analysis — subtract the linear trend to examine the residuals — using GIA model based bias adjusted data shows this: 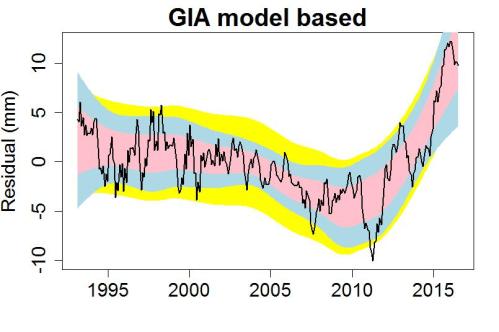 Acceleration is still there but the early deceleration isn’t. Here’s the GPS based bias adjusted data: 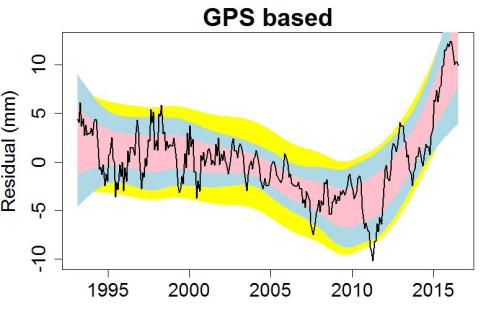 It tells the same story: strong acceleration recently but little if any deceleration early on.

One thing we know affects global sea level is the el Niño phenomenon (ENSO). I took the GPS-based data and fit el Niño as estimated by MEI, the Multivariate El Niño Index, with a 2-month lag. This gave me an estimate which slightly lowers the sea level rise rate, but the sudden and sharp upturn that happened around 2011 is still there: 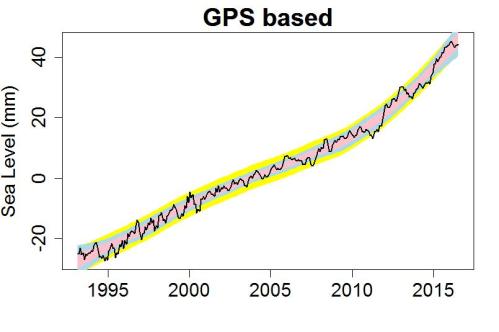 From these data it seems the current rate of sea level rise is substantially higher than others would suggest. I would estimate, based on the GPS based data, somewhere around 5.5 mm/yr.

That this is anything other than “one of those fluctuations,” I can’t deny. But neither can I deny that it could be real; this is what acceleration of sea level rise can look like. Given what we know about the speedup of Greenland melt and thermal expansion, it’s not impossible this brief trend will persist, and coastal cities will be hard hit sooner than expected. Draw your own conclusions.