Over at WUWT someone posted a comment on Bob Tisdale’s post (see my post about that) drawing attention to my removal of the influences of el Niño, volcanic aerosols, and solar fluctuations from the temperature record. This didn’t sit well with some of their readers, particularly someone using the moniker “Javier,” who had this to say:

“Tamino has removed ENSO, volcanoes, and solar from satellite data and from surface data.”

Or so he claims, but since we are not capable of attributing warming to specific causes properly, what he has done is construct a fantasy that has no relationship with reality, where he can then draw his fantasy conclusions. Anything goes by the name of science these days. Some of these people should be working for the entertainment industry.

Well, I suppose sometimes ad hominem and “argument by assertion” can’t be avoided, but you should include at least some actual reasoning along with that, don’t you think?

What struck me, though, is an earlier comment by this same “Javier”:

Do your homework. The trend is always determined by the choice of starting point and ending point. That is usually called cherry picking if you want to make a point with the trend of your choice.

In that post, Javier suggests that Arctic sea ice has “turned the corner” (meaning, ceased its decline) based on … wait for it … this graph:

Evidently Javier was unhappy about NSIDC using daily data on sea ice extent to show that this year had the 2nd-lowest annual minimum on record. So, he decided to go with the September monthly averages for each year, and to start with 2007 to show a “trend” which, he says, shows “that Arctic sea ice has been increasing since that fateful September of 2007.”

Gosh, Javier, what was that you were saying about “The trend is always determined by the choice of starting point and ending point“? Didn’t you “Do your homework“?

Of course the trend isn’t determined by the choice of start and end points, but it’s strongly influenced by it. That’s especially true if you start (or end) with an extreme, which I discussed here. And that’s exactly what Javier has done: start, not just with the most extreme September average in the record, but one so extreme he himself refers to it as “fateful.”

Javier has also resorted to another denier favorite: computing a “trend” based on a time span that’s way to short. Way too short. Ten years, from 2007 to 2016. And, in classic fashion, he omits to estimate any uncertainty with that “trend.”

Let’s do the math for him.

Using September average sea ice extent from NSIDC, and using only the data from 2007 through 2016, the estimated trend by linear regression is +18 thousand km^2 per year. Upward!!! But, the “margin of error” (95% confidence interval) for that figure is somewhere between +142 thousand km^2/yr and -105 thousand km^2/yr. Downward :(

Apparently that’s the best he could do, despite cherry-picking an extreme starting point. Of course he follows this keen trend analysis with what I can only call “mathturbation” to support a claim of trend change … and rather crude mathturbation, in my opinion.

Remember the zombie comment about “context”? Let’s put Javier’s choice in some context, using just the September averages (like he did) but not waiting until 2007 to start:

In my opinion, we’ll get even better context if we use annual average sea ice extent rather than just the September average. I’ll average extent anomaly values October-through-September so the most recent year is a complete one: 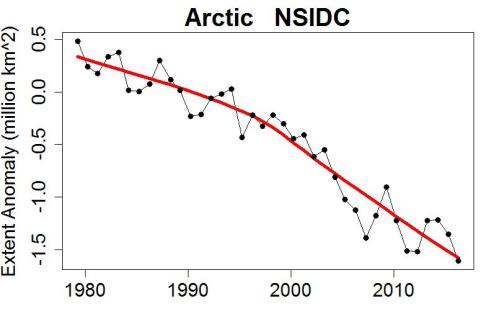 Two things are worth noting. First, the average over the previous 12 months is right in line with the trend (the downward trend). Second, this most recent October-through-September average is the lowest.

We can’t know with certainty how long the trend will continue downward, or how low it will get, except for the fact that it can’t really go below zero. But for many readers of WUWT there’s nothing to worry about, because they have it on the authority of “Javier” that it may have “turned the corner.” Do you feel reassured?