Here’s global temperature anomaly (annual averages) since 1951, according to data from NASA (the year 2016 isn’t yet complete, so that value is for the year-to-date):

In addition to the trend there are also plenty of fluctuations, and for some of them we know the cause. In particular, the el Niño southern oscillation (ENSO), volcanic eruptions, and solar variations are known to influence temperature, but only temporarily. As regular readers are aware, I’ve created models of temperature accounting for those exogenous factors, in order to remove their influence as best possible. The model compares to the raw data thus:

The fit of the model is impressive, but what I’d like to draw attention to is the impact of those exogenous factors, which looks like this: 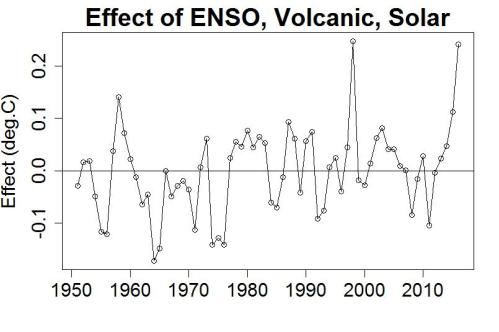 A number of interesting events are plainly visible, like the volcanic eruptions of Mt. Agung in the 1960s, el Chicon in the 1980s, and Mt. Pinatubo in the 1990s, all of which led to temporary global cooling. Then there’s the strong la Niña of the 1970s cooling things off, and there are three especially strong el Niño events which cause warming. The ones in 1998 and 2016 are evident, but the 1983 el Niño is hidden by the fact that it coincides with the el Chicon eruption, so they tended to mask each other.

That leaves the two major el Niño events of 1998 and 2016 as the biggest impacts on annual average global temperature since 1950; they stick out like a pair of sore thumbs.

The reason I’ve drawn your attention to them is that soon after 1998 we started hearing the long drawn-out undead zombie argument from climate deniers about “no global warming for XX years.” It started with “no global warming since 1998,” or sometimes “since 1997” when they could sneak in an extra year because the time span was so short, there wasn’t enough data since then to disprove the claim. Much more data has accumulated since they began this zombie argument, so much that “since 1998” didn’t cut it, so they tried switching to “since 2001” or “since 2002” to shorten the time span again. But there is simply no doubt that the extreme heat of 1998, due to the el Niño, was the start of their malfeasance.

That’s why we apply statistics. If you want to claim a trend change, like “no global warming for XX years”, you need to show that the deviation from the existing trend is not just due to fluctuations. Those who have tried to do that with global temperature, have failed. I know; I’ve tried harder than most, maybe even harder than all, and when I published the result is was: no evidence of trend change. No pause, no hiautus, no slowdown.

But climate deniers aren’t much interested in rigorous analysis. Their main desire is to confuse people about the real danger we face, so anything that looks different from steady warming will be seized upon. The fact that random fluctuation so often looks like that doesn’t deter them — it inspires them.

A big spike — an extreme which goes in the direction of global warming even more than usual, is exactly the kind of fluctuation which invites that kind of mistaken conclusion. The 1998 el Niño was exactly that; so much above the trend that it was bound to make what followed look weak.

It doesn’t just happen with temperature data. Witness the recent, truly moronic attemp by David Whitehouse of the so-called “Global Warming Policy Foundation” (their policy: do nothing) which tries to declare a “hiatus” in Arctic sea ice decline. This is because there were two recent years, 2007 and 2012, during which the decline was extreme. Of course we don’t expect subsequent years to be more extreme right away … it takes time for a trend to show its impact. But we might have expected this kind of shenanigans from the GWPF: whenever there’s an extreme in the direction of global warming, the years immediately following probably won’t be so extreme, so you’ll be all set to declare a “trend” which starts at the exteme — just so you can claim the trend isn’t rising as fast as it really is.

So, all you extreme deniers, the next time something goes wild, the kind of thing that makes people sit up and take notice, don’t despair. Just declare a “trend” which starts at the extreme (it’s called “cherry-picking”) and of course it’ll be lower than the real trend. Don’t do it right away, of course! Wait a few years, just long enough for the fluctuations to make some graph look like you want, then … go all in.

And we’ll be here, to expose you.

By request, the data adjusted for ENSO, Volcanic, and Solar: 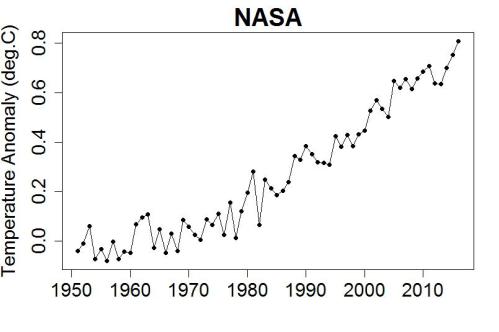