Winter is coming to New England, but in Australia, the land down under, December heralds the beginning of summer. As recently as 2013 they suffered through the “angry summer,” bringing Aussies endless problems while breaking the previous continent-wide summer temperature record by a noteable margin. For many Australians, it was a wake-up call. 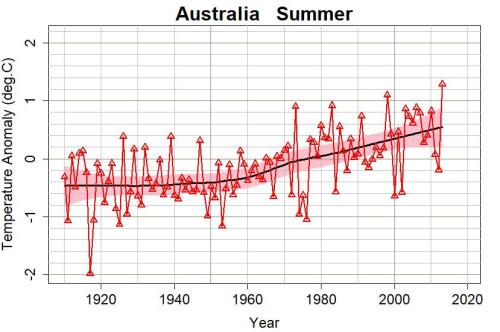 What the trend did is make the angry summer possible. If the climate gets hotter, then whenever the weather turns hot the two will combine to make unprecedented heat. That’s how the angry summer came to be.

It wasn’t until it actually hit Australia, that the scientific talk of “trend” and “climate change” suddenly became palpable. Australians could feel it. When the scientists repeated that it was a portent of things to come, to expect more “angry summers,” more people listened.

They didn’t have to wait long; the most recent Australian summer (Dec. 2018 through Feb. 2019) not only broke the records set during the angry summer, it did so by a large margin. By a very large margin. 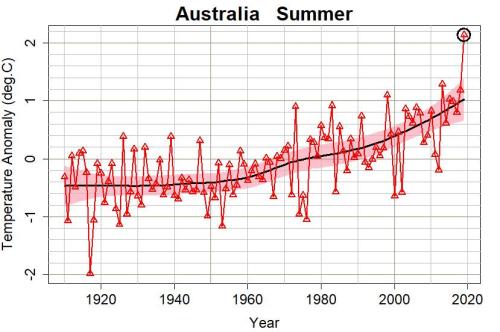 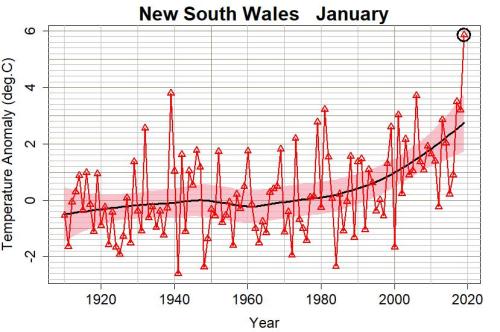 Those extremes get attention. They also bring trouble, taking an incredible toll on human health, straining the power grid to the breaking point, and seriously hurting crops and livestock. The most recent extreme is by far the worst, making the “angry summer” seem pale by comparison. Only by comparison; nobody liked the “angry summer” and Australia doesn’t want to go through it again.

But the climate really has changed, and now the angry summer is more than possible. It’s inevitable. Maybe not this year, maybe not the next, but soon, and for the rest of your life.

The greatest worry isn’t what we’ve seen so far, but what the future will bring. That’s because of the nasty trend which keeps raising the background level, so every hot spell is stacked onto a higher and higher baseline. This isn’t just happening during Australia’s summer, but for all four seasons of the year. 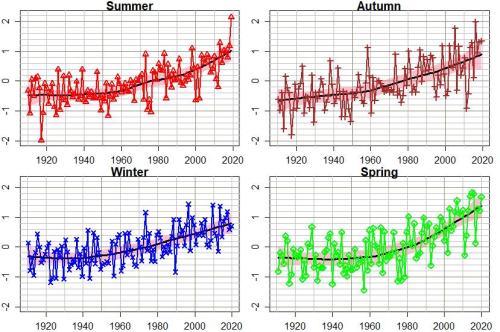 The most recent face of trouble is the bushfire crisis in Australia. The link with climate change is abundantly clear, say fire chiefs from across Australia, only to be contradicted by some of their most embarrassing politicians. Meanwhile, with California wildfires still fresh in our memories, here in the U.S. the debate between Democratic candidates for president asked only one question about climate change.

Thanks to all the kind readers who’ve donated to the blog. If you’d like to help, visit the donation link below.

27 responses to “Summer is Coming”