Back to Basic Climate Denial

Thomas K. Bjorklund has a post at WUWT which tells us a lot about the level of “science” at that blog.


He reveals his theme early:

There it is — and really, folks, this is all he’s got. He claims that the rate of warming has declined from 2006 to the present. There’s other stuff for window dressing; this is his real argument.

Where does he get that? He takes the global temperature data from HadCRU (the HadCRUT4 data set) and fits a 6th-degree polynomial, then calls that “relatively stable and nearly noise-free temperatures.” Here’s his graph:

I prefer my own version; I’ve plotted the 6th-degree polynomial as a blue line, and I’ve added light blue shading around it to indicate the uncertainty range (95% confidence interval):

Now to the heart of the matter: here’s his graph of the rate of warming according to the 6th-degree-polynomial model, as a green line:

He’s also added CO2 emissions data in blue, but that doesn’t matter. His graph sure makes it hard to see how the rate itself has changed. Here’s a better version; I’ve plotted the rate according to the 6th-degree-polynomial model as a blue (rather than green) line, and again I’ve added light blue shading to indicate the uncertainty range (95% confidence interval). And since he mentioned the HadCRUT4 data go back to 1850, I’ll show all of it: 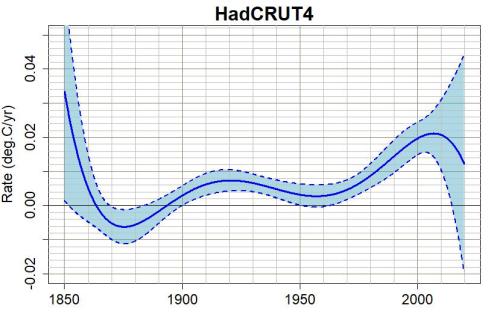 Look at the uncertainty range before the year 1870 and after the year 2000. According to the 6th-degree polynomial model, the warming rate right now might be as high as 0.044 °C/yr — that’s 4.4 °C/century. Do we really have evidence that the warming rate declined since 2006?

Of course not. The uncertainty range explodes near the ends of the time span. As I’ve mentioned in the past, this is one of the characteristic drawbacks of using high-order polynomials to approximate a long term trend. Far from the endpoints they do a great job, but their endpoint behavior is a disaster. The higher the order, the worse the disaster. Especially when estimating rates, not just values.

Are there better ways? Lots.

Readers know I’m partial to the lowess smooth (no disrespect to fans of spline fits, singular spectrum analysis, Bayesian smoothing, etc.). For the trend itself it approximates this (red line with pink shading for the 95% confidence interval): 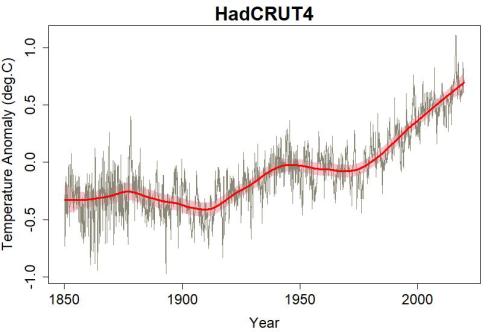 Now to the heart of the matter: here’s the rate of warming according to both the lowess-smooth model (in red) and the 6th-degree polynomial model (in blue): 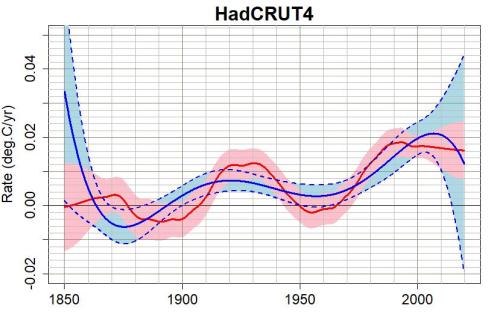 Is there any actual evidence that the rate of warming has declined since 2006? No.

Bjorklund also mentions the data from NASA; does it show evidence the rate of warming has declined since 2006? No. 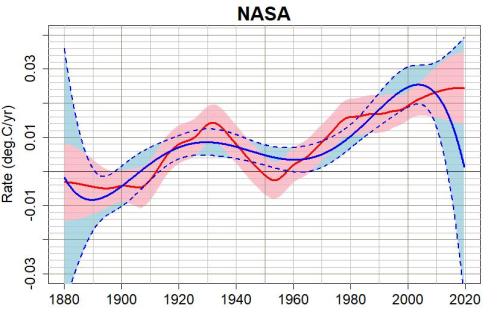 The uncertainty range gets wider near the endpoints, in both models; that’s just unavoidable. But the graphs show how the endpoint problem is so much worse for the high-order polynomial (6th-degree) fit than for the lowess smooth.

If you’re interested in how the rate of global warming may have changed recently, I’ve posted about that myself. As for Bjorklund, his claim has no evidence at all, just the mixture of a bad choice of smoothing method and ignorance of the uncertainties involved.

24 responses to “Back to Basic Climate Denial”