One of the myths about temperature data is the ludicrous notion that the data for atmospheric temperature from satellites are better than the surface data from thermometers. We’ve heard this from people who should know better, like John Christy and Judith Curry, and climate denier politicians like Ted Cruz. The problem is, it just ain’t so.

But before I get to that —
I know I’ve posted about the “pause that never was” quite a bit lately, and how desperate climate deniers are to hold on to this figment of their imagination. I can’t help but share with you the most revealing comment about the “pause that never was” that I’ve seen in a long time (maybe ever). In a post on the WUWT blog about the latest satellite data from UAH, the very first comment was this:

Do we start a new pause? Or does the temperature lower enough to continue the old pause?

God forbid you should wait for enough actual data before declaring a new pause. Even if this is a case of “Poe’s Law,” it worked … as the follow-up comments illustrate. Climate deniers aren’t just desperate. They’re delusional.

Let’s compare surface temperature data (from thermometers) to atmospheric data (from satellites) during their period of common coverage, from 1979 to the present. I’ll compare two surface temperature data sets that have definite differences: NASA GISS (from NASA’s Goddard Institude for Space Studies) and HadCRU (from the Hadley Centre/Climate Research Unit in the U.K.), and two satellite data sets that have definite differences: RSS TLTv4 (lower-troposphere data from Remote Sensing Systems) and UAH TLTv6 (lower-troposphere data from Univ. of Alabama at Huntsville).

Let’s compare yearly average global temperature from the surface data sets, using 1979 through 1999 as a common baseline to see how they’ve diverged since then: 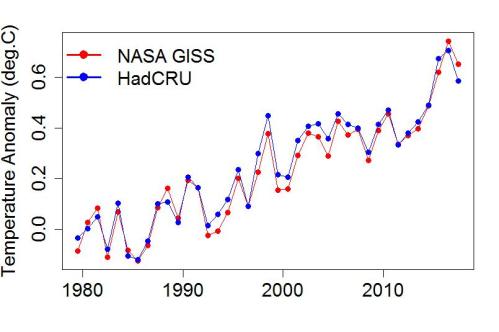 In spite of their differences, they agree quite well. This is even clearer if we plot the differences between these two surface temperature data sets: 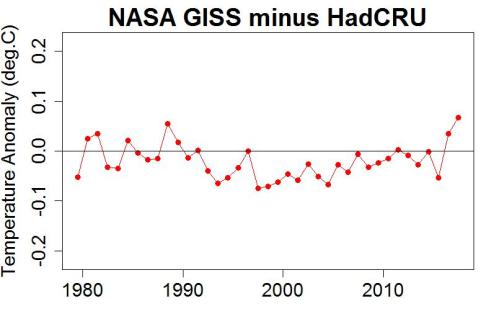 The differences range from -0.075°C to +0.064°C, but the most important thing is that there’s not really any substantial drift between them; they agree quite well on what the relentless trend is.

When we compare satellite data sets, they are definitely drifting apart: 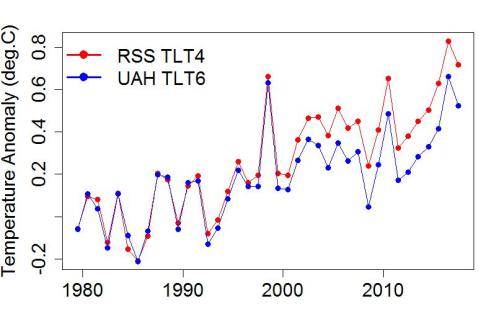 Again, this is even clearer when we plot the differences:

They range from -0.21°C to +0.064°C. Most important, there is undeniable drift between them, with the UAH data consistently getting lower compared to RSS data.

On that basis — which data sets agree with each other better — the surface data are consistently in agreement, the satellite data consistently diverge.

The real kicker, showing how silly is the claim that satellite temperature data are somehow “better,” is that updated versions of satellite data don’t agree very well even from the same source. The data from UAH are up to version 6 now; I have a not-too-old copy of their version 5 data (actually version 5.6). Here’s how they compare: 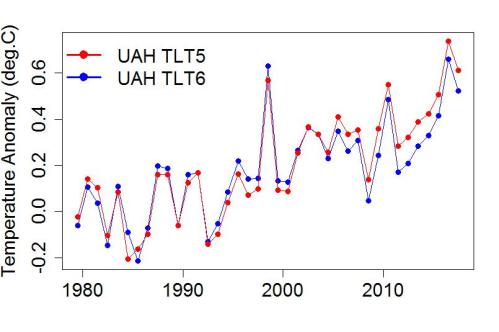 Again they seem to be drifting apart, again confirmed by the differences:

The differences range from -0.12°C to +0.12°C, and more important, there once again is that persistent drift showing how the trend estimate changes from version to version.

Once again, the surface temperature data look a lot more reliable than the satellite data.

Yet another question arises: of the two satellite data sets considered here, which one of those is more reliable? In my opinion, it’s clearly the data from RSS. For one thing, I’ve read the papers describing their latest updates, and to me, the RSS update makes sense, even seems necessary, while the UAH update doesn’t.

For another thing, the RSS atmospheric-temperature data are in far better agreement with the surface temperature data than are UAH data. No doubt, UAH is the “odd man out.”

An interesting summary of the history of UAH satellite data was given in a comment at RC:

Wentz and Schabel 1998 found that UAH didn’t account for orbital decay of the satellites, which resulted in a spurious cooling trend.
http://www.nature.com/nature/journal/v394/n6694/abs/394661a0.html

Fu et al. 2004 found that stratospheric cooling (which is also a result of greenhouse gas forcing) had contaminated the UAH analysis, which resulted in a spurious cooling trend.
http://www.atmos.washington.edu/~qfu/Publications/nature.fu.2004a.pdf

Mears and Wentz 2005 found that UAH didn’t account for drifts in the time of measurement each day, which resulted in a spurious cooling trend.
http://science.sciencemag.org/content/309/5740/1548.abstract