The people of Tampa Bay, in order to prepare for all the problems that will come with sea level rise, responded to Florida’s 2015 Peril of Flood Act by having their Climate Science Advisory Panel (CSAP) produce a Recommended Projection of Sea Level Rise in the Tampa Bay Region. They proposed multiple projections, which were then used to estimate how the region, its people, and its facilities were at risk in a recently released study by the Tampa Planning Commission.

The planning commision’s report considers risks which may plague the Tampa Bay region as early as 2040, which includes a threat to homes, businesses, and Tampa General Hospital. That’s serious business.

The projections cover a range of possibilities. The low end is essentially a continuation of the average rise rate over the last 70 years as observed at the St. Petersburg tide gauge. The projections are provided in tabular form, through 2100 in the CSAP report and through 2040 in the report from the Planning Commission. So, we can make our own graph:

The different scenarios are based on expert evaluation by NOAA, the National Oceanic and Atmospheric Administration. Enter Willis Eschenbach, who derides the projections. Here’s an example of Willis Eschenbach’s method of “scientific” appraisal:

Uh-oh, sez I. We are now in the hands of “experts engaged in climate science”, so hide the good silver and watch your wallets …

Perhaps Willis Eschenbach actually believes that the best way to communicate science is to slander scientists you disagree with, by calling them dishonest in as snotty a fashion as possible.

When it comes to actual science rather than infantile slander, the essence of Willis Eschenbach’s is this claim:

The St. Petersburg sea level data set in question is from their tide gauge, and shows how sea level has been rising in the region since 1947. Here are annual averages: 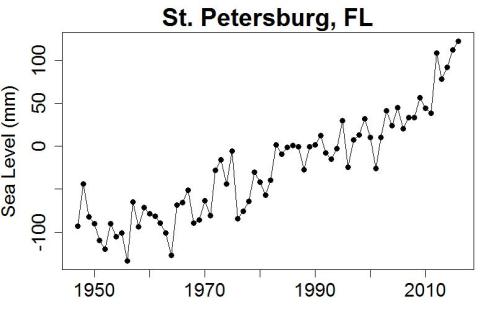 The average sea level rise rate over these 70 years has been 2.7 mm/yr, but Willis Eschenbach mistakenly speaks as though it’s still rising at the same rate. It isn’t. Contrary to what Willis Eschenbach claims, this data set shows significant acceleration. I wonder whether he’s not competent to determine that, or he simply didn’t bother to find out before making his claim.

The linear model on which Willis Eschenbach’s claim is based, the one with a constant rate of rise, is demonstrably inferior to a quadratic model, which includes acceleration:

The quadratic term achieves statistical significance, which demonstrates that the constant-rise-rate model is not correct — but that’s the basis for Willis Eschenbach’s claims that the present rate of sea level rise there is merely 2.6 mm/yr.

Even if we restrict ourselves to the linear model, the rate Eschenbach uses omits more recent data, so his estimate is out of date. The present linear rate estimate is now up to 2.7 mm/yr. And there’s uncertainty associated with that, as with any estimated rate — something Willis Eschenbach doesn’t mention. The linear model suggests the rate might be as high as 3.0 mm/yr (95% confidence interval).

But the linear model isn’t right; acceleration of sea level rise at this location is a statistical fact. The present rate, estimated from the quadratic model, is 4.65 mm/yr. Of course there’s uncertainty associated with that too — it could be as high as 5.7 mm/yr. Already, in 2016 — not at some future time. Yet Willis Eschenbach insists on using an out-of-date and demonstrably wrong estimate, with no consideration of its uncertainty, to ridicule the projections of genuine experts.

Willis Eschenbach also speaks in rather cavalier fashion about the global rate of sea level rise when he says:

This is ridiculous. The present rate of sea level rise, worldwide, is over 3 mm/yr (over 300 mm/century), yet Willis Eschenbach speaks as though it’s less than that, possible as little as 2 mm/yr. I wonder whether he thinks all the scientists who measure sea level rise using satellite data are incompetent or dishonest, or he simply didn’t bother to find out the truth before making his claim.

As for the projections which Willis Eschenbach ridicules in such snotty fashion, we can examine them more closely for the time span up to 2040, the period considered in the report from Tampa’s Planning Commision: 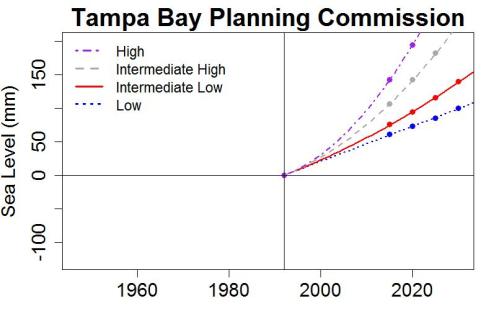 The projections start in 1992, so naturally it’s worth comparing the projections to observed sea level rise since that time as measured at the St. Petersburg tide gauge station: 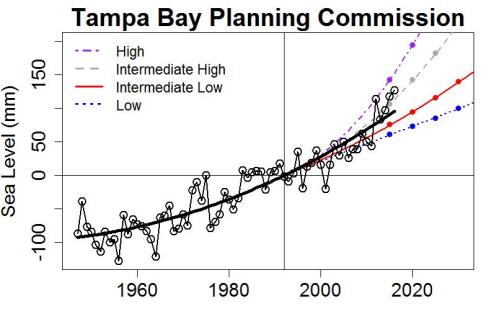 Clearly it’s too early to tell which of the projections will be closer to reality. But some conclusions are already evident. First, the observed sea level rise is well in the midst of the range of projections. Second, because proper planning must take worst-case scenarios into account, it’s a good thing the Climate Science Advisory Panel included the high-end projection, to enable area planners to prepare for the extreme trouble which is a realistic possibility. Third, Willis Eschenbach’s ridicule of the projections is contradicted by observational evidence already.

In my opinion, the worst aspect of Willis Eschenbach’s criticism of the projections isn’t his utter scientific incompetence, it’s the snotty attitude which pervades his essay. Just my opinion.

I advise the people of Tampa Bay to begin their preparations immediately. I also advise them to ignore any and all snotty critics who deride the wisdom of actually getting prepared for the changes that are coming.