It is widely publicized that 2016 will certainly break the record for yearly average global temperature. Again. This will be the third year in a row we’ve set a new record. It’s time we paid attention.

I’ve often emphasized that just because Earth shows an indisputable warming trend, that doesn’t mean every year will be hotter than the one before. In addition to trend, there is also a lot of fluctuation in things like global temperature. So we shouldn’t expect each year to break the temperature record.

It’s also the second year in a row that we’ve broken the record for temperature over land areas only. 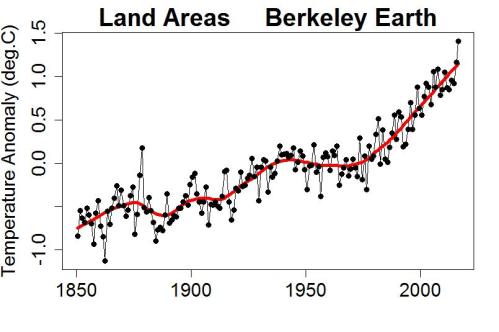 We set a new record low for annual average sea ice extent in the northern hemisphere:

In addition, we set a new record low for annual average sea ice extent over the entire globe:

Despite the importance of the record-breaking levels of important indicators of global warming, more worrisome is that 2016 set a new record for the atmosphere’s concentration of CO2.

Certainly we haven’t really made any progress toward reducing our greenhouse-gas levels. But even more troubling is that fact that we haven’t even made progress toward slowing the growth of atmospheric CO2. The year 2016 brought a new record high amount of increase in CO2:

We’re not just failing to gain ground, we’re losing at a record pace.

Just when we most need to slow our greenhouse gas increase, it’s actually accelerating. And there’s also a new, worrisome record: the U.S. government’s new administration is now in the hands of a record number of the most vile and idiotic climate deniers imaginable.