END_OF_DOCUMENT_TOKEN_TO_BE_REPLACED

Over at the WUWT blog, Philip Lloyd objects to the fact that temperature data for Capetown, South Africa have been homogenized. He objects to being unable to find documentation for the homogenization, but when it comes to providing actual evidence for his own claims (about things being hotter in the 1930s), he has none but vague speculation.

But what’s really funny, truly hilarious, an absolute scream in fact, is that, to demonstrate his claim that the 1970s “were indeed cold,” he offers … covers from Time Magazine. I wasn’t aware that Time Magazine was a scientific journal. But most interesting is that one of the covers is this one:

This Time Magazine cover, an integral part of Philip Lloyd’s “evidence,” and truly representative of the level of “scholarship” at the WUWT blog, is a fake. Yes, it’s a fake.

Says who, you wonder? Says to Time Magazine, that’s who.

One of the never-ending tactics of climate deniers is to tell the big lie. Another is to say something that is technically true in the most limited sense, but is so misleading, so irrelevant, that it’s tantamount to a lie. And a big one.

One of the biggest and most common, a favorite of politicians who want to avoid the issue, is: Climate is always changing.

END_OF_DOCUMENT_TOKEN_TO_BE_REPLACED

There’s been quite a bit of publicity about planet Earth hitting its hottest yearly average temperature on record — for the third year in a row. The New York Times ran the story on page 1:

END_OF_DOCUMENT_TOKEN_TO_BE_REPLACED

The Pause that Never Happened

As part of an ongoing comedy routine, David Whitehouse of GWPF (Global Warming Policy Forum) now claims that the “pause” in global warming — the one that never happened — actually never went away. The funniest part is how lame his arguments are.

END_OF_DOCUMENT_TOKEN_TO_BE_REPLACED 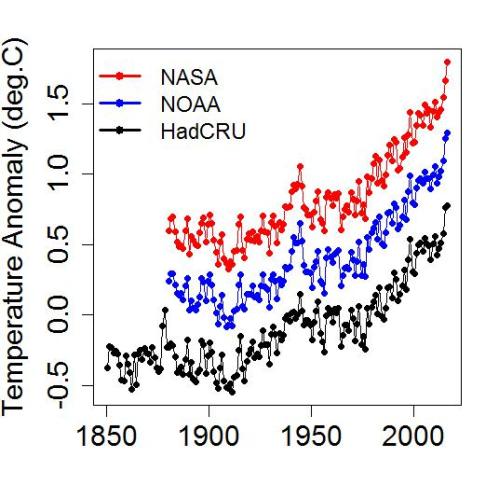 END_OF_DOCUMENT_TOKEN_TO_BE_REPLACED

Climate experts from NASA and the National Oceanic and Atmospheric Administration (NOAA) will provide the annually-scheduled release of data on global temperatures and discuss the most important climate trends of 2016 during a media teleconference at 11 a.m. EST Wednesday, Jan. 18.

The teleconference panelists are:

Audio of the briefing, as well as supporting graphics, will stream live at:

You can read more about it here.

The people of Tampa Bay, in order to prepare for all the problems that will come with sea level rise, responded to Florida’s 2015 Peril of Flood Act by having their Climate Science Advisory Panel (CSAP) produce a Recommended Projection of Sea Level Rise in the Tampa Bay Region. They proposed multiple projections, which were then used to estimate how the region, its people, and its facilities were at risk in a recently released study by the Tampa Planning Commission.