Here’s temperature anomaly in the USA (yearly averages for the “lower 48”) since 1880, according to NOAA (National Oceanic and Atmospheric Administration):

Kinda looks like it’s heating up, doesn’t it? Of course the USA isn’t the whole world, in fact it’s only about 2% of it, so we can’t take its warming rate as representing the entire globe. But it’s at least interesting to know what it is.

If we want a competent estimate of the warming rate, we need to know two things. First, the trend doesn’t follow a straight line so the warming rate has changed over time. Second, you absolutely must use a long enoug span of time to get a decent rate estimate. If the time span you use is too short you’ll get nonsense, which would be either grossly incompetent, or patently dishonest, or both.

Let’s use some math to estimate when the warming rate changed. With changepoint analysis we discover it did so at least twice, around 1938 and 1970, but no other change passes muster. If we allow warming rate changes at those times, we’ll get a decent model of America’s temperature history — not perfect, but sound, let’s call it the “sudden-change model”. Fitting a smooth to the data agrees with it quite well: 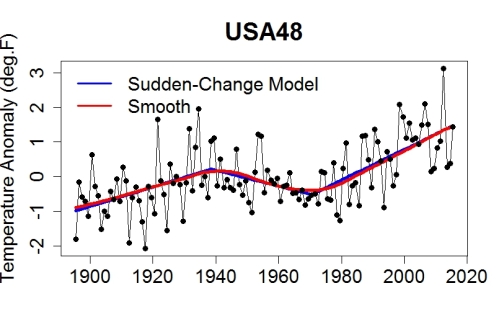 And there you have it. They’re simple models of America’s temperature through time, but they’re mathematically sound, based on as much data as we have available, and they’re honest. And by the way, the warming rate since 1970 is about 4.4 deg.F/century. Plus or minus about 1.4 deg.F/century, that is — could be as little as 3 or as much as 5.8. Which is definitely worth knowing; after all, what good is a warming rate estimate if its uncertainty is so huge that it’s meaningless?

But for some, that’s unacceptable. Those who deny the reality, man-made cause, or danger of global warming — and can’t bear the thought of doing anything about it — can’t seem to accept that any part of the world is warming up. Especially the good old U.S.A. They’ve got their ways to deny that too, of course; still, it seems that lately they’ve been stuck in a rut, using the same old same old.

The plan seems to be this: when data says what you don’t like, insult it. Don’t just call it inaccurate, say that it’s outright wrong wrong wrong. Sprinkle freely with not-so-subtle innuendo, or blatant accusation, that the scientists who collected it or prepared it or improved it are blathering idiots, or liars and cheats and frauds (oh my!). Better still (here’s an old favorite) say the whole global-warming thing is some giant world-wide conspiracy to impose a new world order controlled by the U.N. Gotta give credit to Donald Trump, at least he came up with something new — he said it was started by the Chinese to make U.S. manufacturing non-competitive.

Heck, when you use that little data the uncertainty will be huge. You might even find that the estimated warming rate is zero, or even (my smelling salts!) negative. Do not, however, reveal the uncertainty in that estimate. Because it just might be huge.

Case in point: temperature in the good old U.S.A. Let’s look again at the graph, but this time let’s put a red box around the part that Anthony Watts likes to use for his trend estimates:

Hmmmmm… Does that seem competent to you? Does it seem honest?

What’s that? Do I hear some of Anthony’s accolytes complaining? Did they protest that Anthony doesn’t use the historical data from NOAA, he uses only the data from USCRN — the U.S. Climate Reference Network? He does like to do that. He even likes to praise the data from USCRN.

What does that USCRN data say? How does it compare to the historical data from NOAA?

For a competent comparison, you need to know two things. First, these are temperature anomaly data, which is the difference between a given time’s temperature and the average for the same time of year in some “reference” or “baseline” period. Second, anomalies from the historical NOAA data and the USCRN data use a different baseline.

I know, I know … Anthony has a hard time with baselines.

We’ll put ’em on the same baseline, and for that we’ll use their period of overlap, which happens to be from January 2005 through (as of this writing) August of 2015 (that’s all the data there is for USCRN, barely over 10 years). We’ll also look at monthly rather than yearly averages, since that’s what Anthony likes to use. When done right, here’s how they compare: 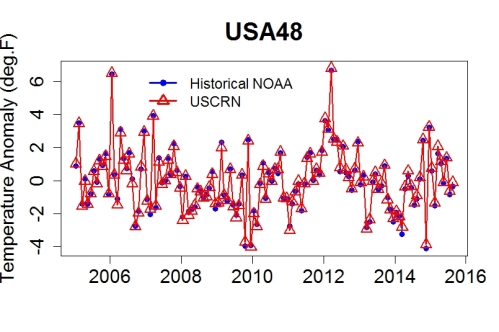 They sure do agree. Exceptionally well.

Which raises the question: if Anthony praises the USCRN data so much, why go out of your way to cast doubt on the historical NOAA data? After all, he regularly complains about it, hosts posts and reader comments about how bad it is, complete with innuendo about how the scientists who distribute it have totally screwed it up through incompetence or dishonesty or outright fraud. If USCRN data are so good and historical NOAA data so bad, why do they agree so closely?

I’ll give you my opinion: Anthony Watts wants desperately to discredit the historical NOAA data because it shows warming, while he loves the USRCN data because there’s only a smidgen more than ten years of it. Since there’s only a teensy-weensy time span, he can find an estimate of the warming rate which looks like “no warming.” Of course the uncertainty of that estimate is huge, making it meaningless, unless you regard “anything that looks like no warming” as meaningful.

The USCRN data can only “nail down” the warming rate to somewhere between -22 and +18 deg.F/century. There’s just too little of it. But Anthony Watts talks about it as though it actually means something important.

Don’t they know? The truth is out there! Global warming isn’t a conspiracy to impose new world order under the U.N., it wasn’t started by the Chinese to make U.S. manufacturing non-competitive. It’s Leprechauns.