In a recent post Anthony Watts highlights the difference between the GISS global temperature for Nov.2010 and that from UAH (i.e., the UAH TLT or lower-troposphere temperature), saying:

I was working on a general report yesterday, but in checking background for it, I discovered this recent missive from Dr. Hansen. I suppose when your agency is the “odd man out”, you feel a need to explain yourself. Note the difference in November 2010 global temperature anomaly metrics:

Yes, I’d try to explain that too.

But surely, Watt’s knows the reason already, doesn’t he?

You know that they have a different reference period??

Several other readers quote the question, and Watts finally replies:

You know that they have a different reference period??”

You mean Hansen is including July figures with Novembers? Like when he used September’s for October in 2007?

I would not be surprised.

REPLY: Hansen is using an outdated base period. 1951-1980 to calculate anomaly, whereas other metric are using more recent periods. – Anthony

Apparently Watts believes that the GISS baseline is “outdated” (and by implication, inferior), as well as that the difference between GISS and UAH data needs “explaining.”

Here’s an idea: let’s do a meaningful comparison instead.

GISS data cover the time period 1880 to the present while UAH only cover end-of-1979 to the present. Here they are during their period of overlap: 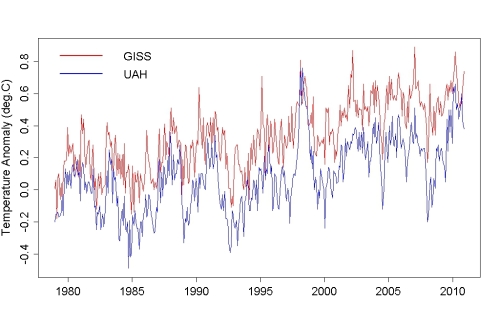 Clearly their changes are similar but not identical. Here’s the difference between the two data sets, together with a 12-month running mean (in red): 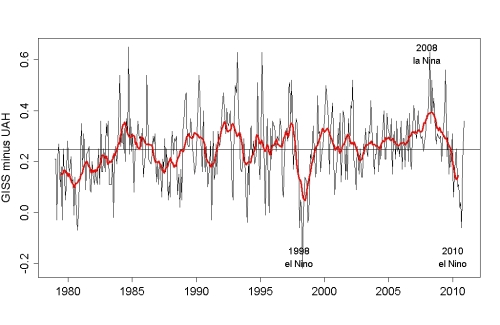 I’ve noted that two of the recent times GISS has been lower than usual relative to UAH are during the 1998 and 2010 el Nino events, and one of the times when GISS was higher than usual (relative to UAH) was during the 2008 la Nina. This suggests that the UAH series shows exaggerated response to el Nino/la Nina events, compared to the GISS series.

Of course, for meaningful comparison we should put both series on the same baseline. I selected 1979.0 to 2000.0, reset both series, and got this:

Compute 12-month running means of the baselined data and you get this: 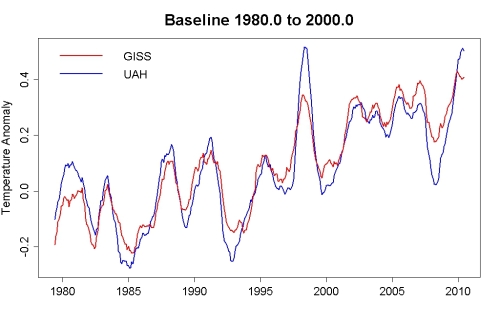 Again it seems that the UAH series has a more exaggerated response to el Nino/la Nina than GISS.

As I’ve done before, I computed a multiple regression of temperature as a function of el Nino/la Nina (as represented by MEI, the multivariate el Nino index), volcanic forcing, and a linear time trend. This computes coefficients for the influence of each factor, as well as a best-fit lag for each influence.

An interesting result is that the MEI coefficient (strength of the temperature response to MEI) was much higher for UAH data than GISS data, just as expected from the preceding graphs. For GISS, each 1 unit of MEI warms the globe by about 0.069 deg., while for UAH it’s about 0.133 deg., nearly twice as much. The difference is strongly significant, so it seems that tropospheric temperature responds to the el Nino/la Nina phenomenon more strongly than surface temperature does.

Meanwhile, Watts promises “I’ll have another post on this.” Can’t wait.