el Niño and the Non-Spherical Cow

Most people who follow climate science are aware that one of the natural factors which affects global temperate is the el Niño Southern Oscillation (ENSO). It’s a mode of natural variation in the tropical eastern Pacific ocean which is indicated by sea surface temperature in that region, as well as patterns of atmospheric pressure, surface winds over the ocean, even precipitation over a much larger region. As such, ENSO — whatever its cause (and it’s been happening naturally for a long time) — has far-reaching affects on weather over a large area, and a notable impact on global temperature. When the ENSO is in its “high” state (called simply “el Niño“) our climate tends to be warmer, but when it’s in its “low” state (referred to as “la Niña“) earth tends to be cooler.

Computer simulations of earth’s climate system can actually reproduce the ENSO phenomenon, showing that it might be a straightforward consequence of the circulation of wind and ocean currents. But those computer models which do recreate ENSO do so in apparently random fashion, as though it were a stochastic (i.e. random) phenomenon. This too is, as far as we know, correct — ENSO is a natural mode of variation within earth’s climate system rather than a response to some forcing agent. And, the ENSO state of the world has proven unpredictable on anything but the shortest time scales, just as we expect from a stochastic phenomenon.

Because of its impact on global temperature, ENSO can cause large fluctuations of the global temperature trend on time scales of a decade or even longer. Computer models of global climate simulate this too, but again, they do so at random times which don’t necessarily match the timing of the ENSO pattern we see in the real world. One of the consequences is that if you run multiple computer simulations of earth’s climate, then average the results, the simulated ENSO events get scattered throughout time and end up being averaged out, so that the model average ends up looking like it doesn’t have a strong ENSO impact even though the individual model runs do.

While the ENSO phenomenon has a potent impact on global temperature, it’s one of those phenomena which doesn’t create a long-term trend. It can and does cause temperature to go up and down and up and down and down and up and down and up, so that short-term (a decade or even longer) trends are profoundly affected, but on longer timescales (30 years or more, which we usually associate with “climate”) the ups and down mostly cancel each other and the long-term trend impact is minimal. But the short-term effect confounds the global temperature changes which are due to other influences, in particular to climate forcing agents like the man-made increase in greenhouse gases in the atmosphere. If we could account for the influence of ENSO on global temperature, we could isolate the influence which is due to other factors and, we hope, better understand how those other factors affect earth’s climate.

There have been many attempts to do so. One approach is to estimate global temperature as a simple function of climate forcing and ENSO through a regression approach; perhaps the best-known example is Foster & Rahmstorf (2011), which found that when the impact of natural factors (volcanic eruptions, solar variations, and ENSO) is removed, the trend in global temperature has been remarkably steady since 1979 (when satellite observations of atmospheric temperature begin). Another strategy is to use a climate model — not a climate simulation like most computer models are, but a simple mathematical model — which includes the affect of ENSO. I did so using a 2-box energy balance model here and found again that there’s nothing mysterious or inexplicable about the most recent pattern of global temperature, it is still following the path we expect — which means that it is still showing the warming influence of man-made CO2 and other greenhouse gases.

The bottom line is that those who claim that global warming has “stopped” or even “paused” are deluding themselves. The phrase “global warming” refers to climate change, including temperature increase, which is caused by mankind, and that has continued unabated. In fact, if it weren’t for the continued warming due to human activity, natural variations (like ENSO) would have brought about a notable cooling over the last decade or so. But earth hasn’t cooled during that period, not even at the surface where we notice it most immediately, and that’s because the man-made component — global warming — has continued.

Those attempts have some severe limitations. For one thing, they’re linear models, in which the impacts of various factors (man-made greenhouse gases, ENSO, natural climate forcings) are additive, but while that is often a good approximation, the real world is nonlinear. For another, they’re based on global models which don’t capture the differences of the response of various regions, or subsystems, or their interactions (although there are some attempts to extend the scope of regression models, for example here and here). It’s reminiscent of the old joke about a physicist analyzing bovine behavior by starting with a simple model: “Assume a spherical cow.”

It might be very useful to run a computer model simulation in which the ENSO is constrained to follow its known historical behavior, so we can see how it might have affected actual history rather than a gereric “earth system.” That’s exactly what was done in a new paper by Kosaka and Xie (2013, Nature, doi:10.1038/nature12534) which investigates the impact of the tropical Pacific sea surface temperature on global temperature change. That’s the region whose variations are often referred to as the el Niño Southern Oscillation (ENSO).

The new research uses multiple runs of a coupled ocean-atmosphere computer model to simulate global temperature changes in response to climate forcing when the sea surface temperature (SST) in the el Niño region follows its historically observed values. They also estimate temperature change when those SST are not so constrained. In this way they hope to estimate the impact of actual el Niño/la Niña fluctuations on observed temperature.

The HIST runs reveal that climate forcing causes reasonably steady warming since the 1970s and especially since about 1992, but that ENSO can still cause natural cooling for periods of a decade or more so that even though the man-made influence continues to cause warming, it is cancelled by ENSO cooling and results in a “hiatus” of global temperature increase:

In the 10 HIST model runs those kinds of events happen haphazardly, so that when they’re averaged the mean behavior shows steady recent warming: 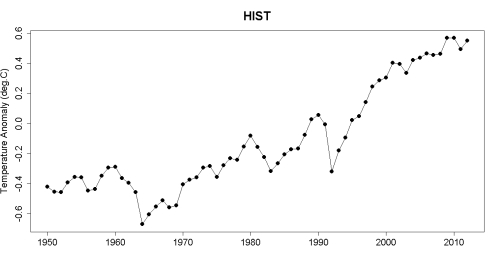 However, When the model is run using historical data for SST in the ENSO region, the last decade’s la Niña dominance causes sufficient cooling to cancel out most of the warming due to climate forcing in the last 10 years:

If we take the difference between the POGA-H models (with ENSO constrained to follow historical data) and the HIST models, we see the estimated influence of ENSO on global temperature history:

This is, according to the new research, how ENSO has modified global temperature since 1950. The influence is clear: a pronounced recent ENSO-induced cooling which has cancelled the continued global warming due to man-made CO2, leading to the “hiatus” in the increase of global temperature.

We can compare the POGA-H models’ average to observed temperature history (according to HadCRUT4 as the authors use) to see how well the models reproduce what has actually happened:

The agreement is outstanding, including over the last decade and more, with correlation between the models and observations of 0.93. Using just the data since 1970, when — according to the authors — sea surface temperature data is more accurate, the correlation is an impressive 0.97. This is powerful evidence that the recent slowdown in global temperature increase is not a slowdown of “global warming,” i.e. man-made climate change, it’s simply partial cancellation of global warming by the natural fluctuations due to ENSO.

Some people have not just misunderstood this new research, they seem to have bent over backwards to misunderstand. Probably the most nonsensical example comes from Judith Curry. She looked at the POGA-C results (in which ENSO was constrained by historical data but climate forcing was held fixed): 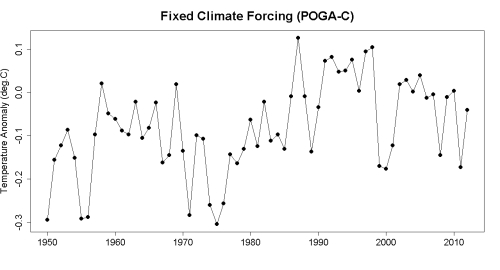 Her first mistake — quite an embarrassing one really — was to assume that this was the influence of ENSO on global temperature history. This quite misses the point, that one of the strengths of the new approach is that it allows climate forcing and ENSO to interact in a nonlinear manner. The actual estimate of the influence of ENSO, according to the new research, is shown in the graph labelled “POGA-H minus HIST.”

But her bigger mistake, which is so embarrassing that, in my opinion, she should actually admit how wrong she was and apologize, is cherry-picking the lowest value of the POGA-C average and its 2nd-highest value and calling that the influence of ENSO. Yes, folks, as hard as it may be to believe, Judith Curry actually took this as the estimated influence of ENSO on recent global temperature:

On that basis, she estimate the ENSO influence to be 0.4 degr.C, and the net global warming to be 0.68 deg.C, then declared that natural variation was responsible for more than half of recent global warming.

As the graph labelled “POGA-H minus HIST” shows, the influence of natural variation, at least that part of it from ENSO, has been cooling, not warming, and if we want to assign a percentage we should say that natural variation has been responsible for about negative 25% of global warming. Not only did Judith Curry execute one of the most blatant, most obvious, and most ludicrous examples of cherry-picking, she couldn’t even get the sign of the influence right. That’s what I’ve come to expect from her.

94 responses to “el Niño and the Non-Spherical Cow”