Once is not enough

In the past I’ve explored simple energy balance models for the evolution of global average temperature. One of the important things to note is that a “1-box” energy balance model — in which the entire climate system is considered to have a single time constant — isn’t really sufficient. It can give a pretty good fit, but for a more realistic estimate you need at least two boxes. One represents rapid response to climate forcing — think of it as the “atmosphere” if you wish. The other is for slower response — think of it as “ocean” if you wish, or as “upper ocean,” or as “everything else.” One could be even more realistic with more than two boxes, after all the deep ocean certainly effects climate but with a longer time scale still, and there’s the cryosphere on top of it all, but rather than go the way of the full-blown computer simulation model, let’s see what happens if we just use a 2-box model with two time constants. We’ll think of box 1 as the atmosphere, so that it should correspond to the surface temperature we’re all familiar with.


Given climate forcing as a function of time, one can integrate the 2-box model equations of motion numerically. But this isn’t really necessary because the equations can be solved in closed form. The solution is a superposition of the forcing function exponentially smoothed with both time constants. Temperature for box 1 will be

is the forcing function exponentially smoothed with the first time constant,

with the second time constant,

are the expansion coefficients (which are related to the heat capacity of the boxes, the time constants, and climate sensitivity), and

is an integration constant.

One can try to estimate relevant physical quantities (heat capacities, rate of heat exchange between the two boxes, and time constants) from basic physical considerations. This is quite difficult, and always seems to lead to disagreement. But if we’re mainly interested in surface temperature then we don’t have to do this. We can determine the expansion coefficients and the time constants empirically, by fitting the exponentially smoothed forcing function to observed temperature data. This doesn’t enable us to divine the heat capacities or heat exchange rate, but it will show whether or not the assumed forcing function can lead to the observed temperature change and it will enable us to estimate climate sensitivity — an important parameter. That will be equal to the sum of the expansion coefficients

The last time I did this I used climate forcing data from NASA which only went through 2003. Since then NASA have updated their forcing data through 2011. Let’s repeat the experiment and see what happens.

The forcing data are at annual time resolution, so I’ll use annual average temperature from NASA GISS. Computing the 2-box model gives this: 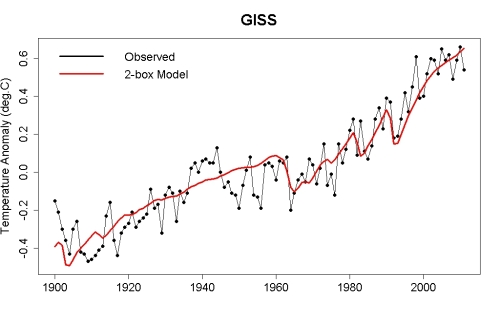 The fit is pretty good, except that there are rapid fluctuations (noise if you will) that are not accounted for. If instead we use a 1-box model, the fit is still good but decidedly not as good as the 2-box model: 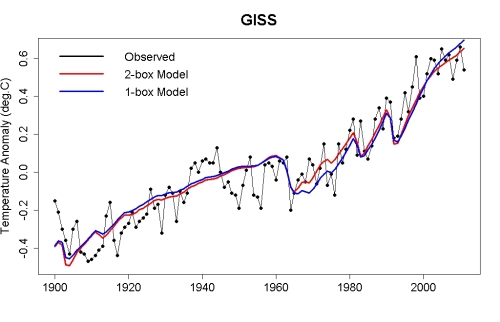 One of the things left out of the 2-box model is the influence of the el Nino southern oscillation (ENSO). This is not a climate forcing; it doesn’t represent a change to the energy budget of the climate system as a whole. Perhaps the best way to treat it would be to introduce a time-variable heat exchange rate between the two boxes. What I’ll do instead is simply treat it as a temperature perturbation. I experimented with treating it as a forcing, or treating its time derivative as a forcing, but the results don’t indicate that either of those approaches has any advantage.

I characterized ENSO by the southern oscillation index, or SOI. Bear in mind that unlike indexes like MEI (multivariate el Nino index), the SOI is negative during el Nino conditions and positive during la Nina conditions, so we expect the sign of its effect to be reversed relative to those other indexes. We also know that ENSO has a delayed effect, lagging by about 6 months, so I computed the average SOI from each July through the following June to represent the annual impact of ENSO. Then I fit a model consisting of exponentially smoothed forcings and the lagged SOI. That gave this model, which frankly, strikes me as not just good, but stunningly so: 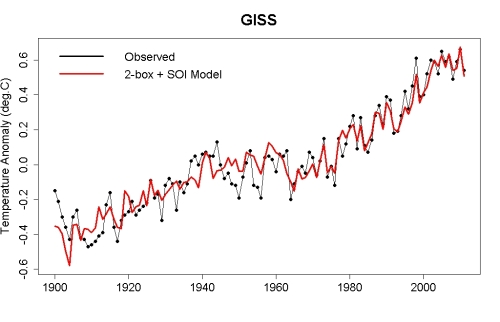 The best time constants turned out to be 2 years and 26 years. This is in good agreement with the results of GISS climate simulation models, which suggest about a 30-year time scale for the climate system as a whole. The “fast” coefficient was 0.17 deg.C/(W/m^2) and the “slow” coefficient 0.51 deg.C/(W/m^2), indicating overall climate sensitivity of 0.68 deg.C/(W/m^2), which gives a sensitivity to doubling CO2 of just about 2.5 deg.C.

That temperature hasn’t risen as rapidly over the last decade or so as in the preceding decades is in large part due to el Nino. As shown here, the influence of el Nino over the last decade has been decidedly cooling. But that isn’t part of the signal, it’s part of the noise — noise of a physical origin, but not persistent temperature change. If we use the 2-box model to estimate the influence of ENSO, we see its recent cooling influence plainly: 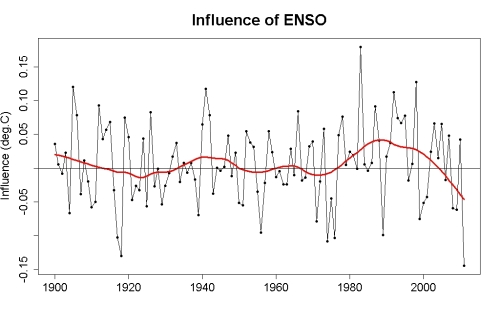 If we take the full 2-box + ENSO model and remove the influence of ENSO, we see what the model suggests as temperature change apart from this fluctuation: 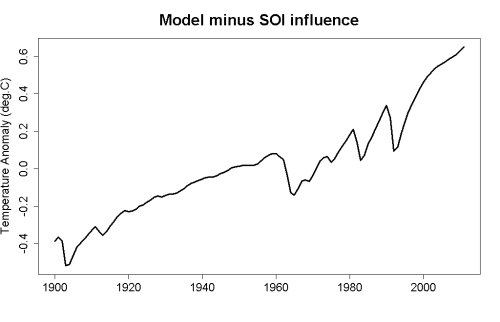 And ENSO isn’t the only impermanent flucutation contributing to less recent warming. Solar forcing has been less than in the preceding decades too. Perhaps I’ll compute and remove the influence of solar variations and volcanism, in order to isolate the anthropogenic influence further.

The salient point is that those who are trying to “explain” temperature change over the last decade are barking up the wrong tree. There’s nothing to explain. Temperature has continued to evolve according to climate forcing and known noise factors like ENSO. There is certainly no need to invoke a mysterious influence of the Atlantic multidecadal oscillation or some mythical 60-year cycle. There’s nothing to explain.

Sooner rather than later we’ll see more surface-warming influence of el Nino. The sun will continue to vary, but within the narrow range it has varied in the past. The long-term evolution of global temperature will be dominated — yes, dominated — by the forcings that are changing by large amounts and will continue to do so over the next century. Primarily, that’s greenhouse gases. No fantasy ocean oscillation or mystery cycle will save us from what is coming. It’s already hot in here, and it’s gonna get a helluva lot hotter.

52 responses to “Once is not enough”