A Möurnful Application of Care and Skill

Not long ago WUWT reported on a paper published by Nils-Axel Mörner and Albert Parker. It’s their attempt to argue that sea level isn’t accelerating, and that sea level rise is nothing for Australia to worry about. They do so by disputing any data that disagrees with their thesis, mentioning as many confounding factors as possible (whether relevant or not), and presenting a sorry excuse for proper “analysis.”


The line I found most amusing was their statement that “A tide gauge record must be analysed with care and skill.” As an example they present the tide gauge record from Fremantle, Australia. I must admit I’m impressed by the care and skill they applied to these data in order to accomplish the goal of concealing the truth of how sea level is changing at this location.

The tide gauge record from Fremantle (15 km SW of Perth) provides a very informative record (Figure 2). It shows fluctuating over a 113 year time span. This indicates that one cannot obtain meaningful trend values from shorter segments like tha last 10 to 20 years. We provide two different alternative analyses; viz. (1) a long-term mean trend analysis (Figure 2a) and (2) a dynamic analysis (Figure 2b).

The “long-term mean trend analysis” is just a linear regression fit to the data. That’s plain vanilla, except for the fact that they neglected to remove the (rather large and completely obvious) annual cycle from the data, an omission which reduces the accuracy of the result. No big deal really.

What’s truly fascinating, in fact absolutely spellbinding, is their “dynamic analysis.” It’s displayed graphically in their Figure 2b (click the graph for a larger, clearer view):

The purple line is what they claim is the likely “local subsidence factor in the order of 1.4 mm/year” (more about that later) while the yellow line is their “dynamic analysis.” Boy oh boy is it dynamic!

Here’s a clearer view of their “dynamic analysis” with their signal in red (which I think is a bit easier to see than yellow, click this or any of the graphs for a larger, clearer view):

The question naturally arises, how did they choose the slope-change moments?

Alas, they give no clue at all how they chose their slope-change points. Here’s my guess: 1913 and 1956 were chosen by visual inspection of the graph, but 1993 and 1997.3 were chosen specifically because that gives a low slope value after 1997.3. The value was extra low in 1993 and extra high at 1997.3, so that drives up the final slope-change point, which in turn reduces the slope of the final time segment. That of course makes it cherry-picking: selecting their slope-change moments for no other reason than it makes their model look the way they wanted it to look.

Here’s the rate of sea level rise according to the Mörner/Parker model:

Note the ridiculously high rise rate from 1993 to 1997.3. My opinion: they did that so they could raise the final “slope-change point” in order to reduce the final slope. Mission accomplished.

It’s especially ironic that they would choose their slope-change points to include 1993 and 1997.3, moments spaced less than five years apart, after having protested that “one cannot obtain meaningful trend values from shorter segments.” 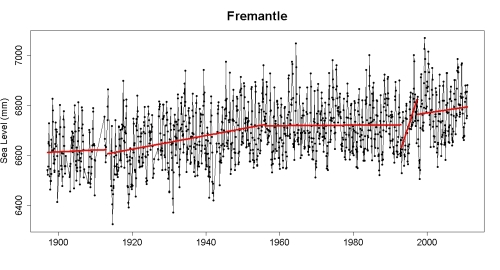 I think that illustrates just how ridiculous is their choice of isolating the interval 1993 to 1997.3, and how strongly it tends to raise the final slope-change point (and therefore lower the final slope).

What would we get if we analyzed tide gauge data from Fremantle in order to find out how it’s really changing, rather than to support some desired outcome? First of all, there’s a whole year more of data:

Notice what it did during the most recent year of data?

We can linearly de-trend the data, then compute a Fourier transform, to check whether or not there’s really an annual cycle:

Yes there is. It’s amplitude is about 220 mm, as we can see from a “folded plot” of the linearly detrended data:

When we remove the annual cycle to define anomaly values, we get a clearer view of the long-term changes: 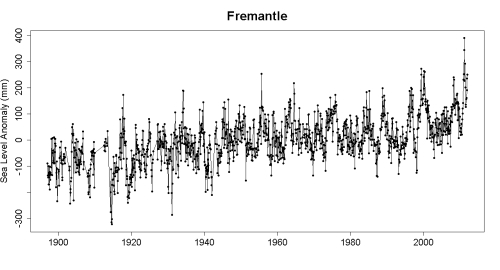 Notice what it’s been doing lately?

To get an idea of how the rate of sea level rise has changed, apart from the highly irregular month-to-month and year-to-year fluctuations, let’s smooth the data:

We don’t have to use a fancy smoothing method. We could just use 10-year moving averages:

Notice that acceleration around 1990? Notice that extra-high rate of increase recently? Notice that the highest 10-year average is the most recent one? Yep.

The truth is that sea level rise at Fremantle has accelerated recently. It’s currently increasing at over 6 mm/yr. The Mörner/Parker model is wrong, and their result that the current rate of sea level increase at Fremantle is a mere 1.5 mm/yr is wrong. But … that’s what they wanted to get, and you have to admire the ingenuity they applied to get it.

But wait, there’s more, the pièce de résistance! Evidently they weren’t satisfied just reducing the estimated sea level rate at Fremantle to a paltry fraction of its true value. They wanted to eliminate it entirely! And how, you wonder, could they do that?

The answer lies in their purple line, the “local subsidence factor in the order of 1.4 mm/year.” They actually claim that Fremantle is subsiding at that rate, so if we subtract subsidence of 1.4 from their low-ball estimate of 1.5, we’re left with practically nothing! Now that is ingenious.

And how, you wonder, did they get their estimate of the subsidence at Fremantle? Here’s how:

The rise from 1913 to 1956 was the order of 2.5 mm/year. Because there was a general global eustatic rise during this period of about 1.1 mm/year[23,27,31], the Fremantle tide gauge is likely to include a local subsidence factor in the order of 1.4 mm/year (purpel line).

Notice that they used only a time period when the rate at Fremantle was higher than the global rate? Is that more “cherry-picking”? Yep.

Let’s try their own logic with a different time span: from 1956 to 1993 the rate at Fremantle is only 0.2 mm/yr but the global rate is 1.7 mm/yr. Therefore Fremantle isn’t subsiding, it’s actually lifting at a rate of 1.5 mm/yr!

If that logic seems ridiculous to you … it does to me too.

The fact is that sea level change is not globally uniform. The differences between the rate at Fremantle and the global rates are not necessarily due to subsidence (or lift!). Doesn’t Nils-Axel Mörner know this?

It seems pretty clear to me that they simply cherry-picked a time span when the sea at Fremantle was rising faster than the global average, for the specific purpose of claiming subsidence — so they could then remove their estimate from the present rate in order to make it go almost to zero. When it comes to hiding the sea level rise (and its acceleration) in Australia, Mörner and Parker have shown extraordinary care and skill.

By the way, it has been confirmed that Albert Parker is the same person as Alberto Boretti. You may recall both names from this post about comments submitted to a journal in response to a paper by Christine Shepard. There were three submissions, but only two were published. That’s because one was from Albert Parker and another from Alberto Boretti — yes, two comments submitted by the same person under two different names. Draw your own conclusion.

78 responses to “A Möurnful Application of Care and Skill”