The Thermometer is Melting

Ice is one of nature’s thermometers, telling us whether or not the temperature of water is above or below 0°C (32°F). When things get hotter, it melts more and faster; when things cool down, water can freeze and ice accumulate. In general: more heat = less ice; less heat = more ice.

One of the places on Earth we find lots of ice is the sea surface in the Arctic, and when we graph its extent the first thing we notice is the seasonal pattern: in summer/fall there’s more heat, less ice; in winter/spring less heat, more ice.

But we also notice an overall decline, visible in spite of the gian size of the seasonal melt. We can make it even more visible if we transform extent values into extent anomaly values. To do that, we figure out the the “average” extent for each time of year. Then we take each value and subtract the average for the same time of year to get anomaly values. Essentially, we’re subtracting out the seasonal cycle, leaving the secular trend in place. We get this: 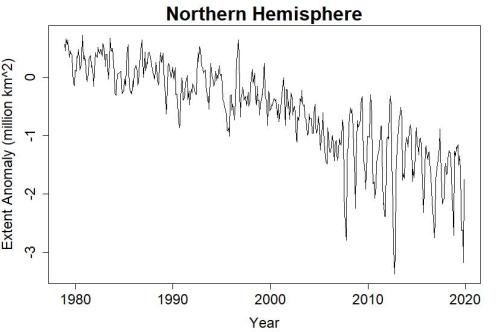 It’s true that the overall decline is more plainly visible. But now we see another visible change: around the year 2007, the anomaly values go crazy, showing what looks like a seasonal pattern of their own. Did Arctic sea ice take on some strange fluctuation pattern all its own?

The “average” seasonal cycle doesn’t change from year to year — at least, not as far as anomaly calculation is concerned. What if we broke that rule? What if we subtract away a seasonal cycle which does change over time? Maybe, this one: 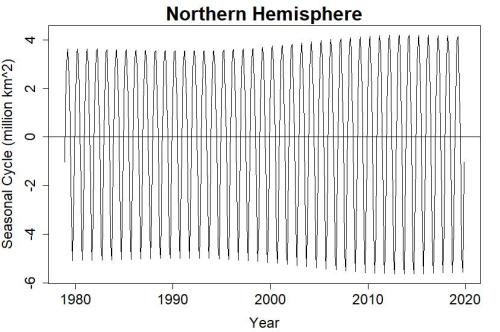 It’s tailored to mimic the changing seasonal cycle in Arctic sea ice extent. If we subtract this from the original data, we can define what I call adaptive anomaly values: 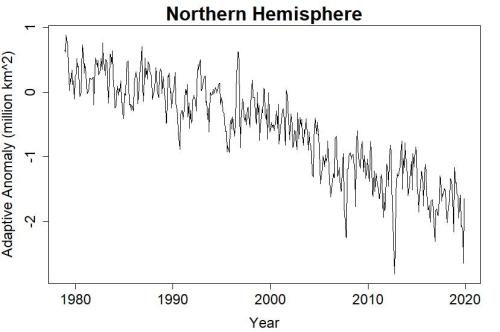 Now the overall decline “jumps off the page” to grab your attention, and we note the absence of that crazy behavior after 2007. But we also note two extreme events, two times the Arctic sea ice extent took a nosedive and dipped to new lows, one in 2007 and the other in 2012. As it turns out, both events happened during September, when Arctic sea ice tends to be at its yearly low.

I calculated a lowess smooth of the Arctic sea ice “adaptive anomaly” values, and I also computed a piecewise linear fit (PLF), a model consisting of straight lines meeting at their endpoints (it could also be called a “linear spline”). The times to transition from one straight line to the next, were chosen to give the “best fit” (least squares) while insisting the changes passed statistical significance tests. The two ways of modeling the data, by lowess smooth and by PLF, agree rather well. Here are yearly averages of Arctic sea ice extent anomaly as black dots, with the PLF as a thick blue line and the lowess smooth as a thick red line (the pink band is the uncertainty range of the lowess smooth):

The interesting result is that there have been three “episodes” of Arctice sea ice loss. The first extends to about October of the year 2001, with sea ice declining at about 35,000 km^2/yr. During the second episode, up to around February 2007, it declined faster at about 155,000 km^2/yr. Since then it has returned to very near its previous rate of decline at 46,000 km^2/yr (faster loss than the first episode, but the difference is not “statistically significant.”)

I can even plot the rate of sea ice loss over time, according to both models (PLF and lowess). The PLF actually estimates the average rate during each episode, while lowess can estimate the instantaneous rate. Here they are, lowess in red, PLF in blue, with pink shading for the lowess uncertainty range and blue dashed lines marking the PLF uncertainty range:

Some climate deniers claim that Arctic sea ice is in “recovery.” They base this on the fact that it’s not declining as fast now as it was from 2001-2007, and that with the clever presentation of graphs they can make it look like the decline has subsided (but there’s a lot they must not show, to make that happen).

The total decline of Arctic sea ice extent since we began satellite observations in the late 1970s has been around 2.3 million square kilometers — bigger than the state of Alaska and two states of Texas combined. Draw your own conclusions.

Thanks to Colin Letham for his generous donation to the blog. If you’d like to help, please visit the donation link below.

12 responses to “The Thermometer is Melting”