Those of us who follow such things, know that Europe has been hit with two killer heat waves since the year 2000. Super-killer heat waves. The first, in 2003, covered much of western Europe and led to about 70,000 deaths due to heat stress. The second, in 2010, hit Russia and killed another 50,000 while destroying a third of Russia’s wheat crop (Russia is one of the largest wheat exporters in the world).

But even those of us who do follow such things, may have missed the fact that Europe has actually had three super-killer heat waves since the year 2000.

END_OF_DOCUMENT_TOKEN_TO_BE_REPLACED

The town of North Pole, Alaska, had to cancel their yearly “Christmas in Ice” celebration. The reason? Not enough ice.

Winter is coming to New England, but in Australia, the land down under, December heralds the beginning of summer. As recently as 2013 they suffered through the “angry summer,” bringing Aussies endless problems while breaking the previous continent-wide summer temperature record by a noteable margin. For many Australians, it was a wake-up call.

END_OF_DOCUMENT_TOKEN_TO_BE_REPLACED

Back to Basic Climate Denial

Thomas K. Bjorklund has a post at WUWT which tells us a lot about the level of “science” at that blog.

END_OF_DOCUMENT_TOKEN_TO_BE_REPLACED

“Gagging climate change experts from speaking in the middle of a bushfire disaster is a new low from this government.”

So said Australian Member of Parliament David Shoebridge after bureaucrats attending a climate planning and adaptation conference had been advised not to discuss the relationship between climate change and Australia’s bushfire crisis, the Guardian reports.

Yes, there’s more news of wildfires on the rampage, bringing fear and destruction, made worse by many things including climate change. But the latest isn’t from California; it’s happening in Australia and especially hard hit is the territory of New South Wales. Yes, a lot of things are making wildfire/bushfire worse in California/Australia. Nobody denies that. One of those things is climate change. Those who deny that, are climate deniers.

END_OF_DOCUMENT_TOKEN_TO_BE_REPLACED

Update: This post has changed to correct a mistake I made with the ERA-5 data.

I keep hearing about such-and-such month being the “hottest such-and-such month on record.” October of this year, for example. For data sources like NASA and NOAA in the U.S. and HadCRU in the U.K., the time needed to do the computations (mainly waiting for all the observing stations to report) delayed such announcements until mid-month, but lately I’ve been hearing it early in such-and-such month, often based on announcements from the Copernicus Climate Change group in Europe. I think they base their announcments on the ERA-5 data, a re-analysis data set, which incorporates both observed data and computer simulation.

I looked at the ERA-5 data, which starts in 1979 (probably because that’s when the satellites really kick in). The interesting thing is that it doesn’t just show increase, it shows (statistically significant) acceleration. 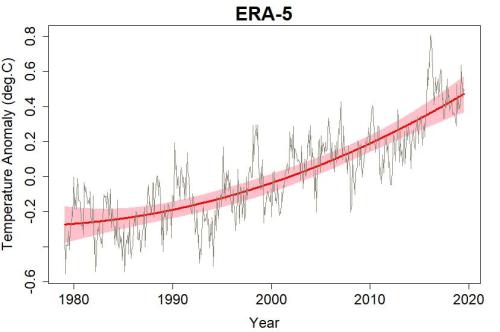 END_OF_DOCUMENT_TOKEN_TO_BE_REPLACED

I’ve formed a gridded composite sea level estimate and I’d like to share it. It’s quite crude, but some compensation is necessary because a simple average of stations is dominated by Europe and North America, there are so many tide gauge stations there. My regional breakdown was a first step; this is the next.

I divided the world into 30° x 30° latitude-longitude grids, and within each, aligned all the tide gauge stations with at least 360 monthly values since the year 1900. Then I aligned all 47 grid series (which actually had data), area weighted, to get a global estimate:

END_OF_DOCUMENT_TOKEN_TO_BE_REPLACED

Mary Ellis Steven is excited about meeting Greta Thunberg this Friday, at her climate strike in Charlotte, North Carolina.

So excited to have the one and only @GretaThunberg join my strike this Friday!
See you there, Charlotte! https://t.co/lgsrFLeOs8
— Mary Ellis Stevens (@_Mary_Ellis) November 7, 2019

Mary, you are Greta Thunberg. 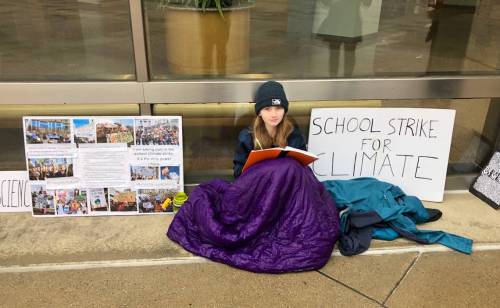 END_OF_DOCUMENT_TOKEN_TO_BE_REPLACED

A new paper by Nauels et al. concludes that even if the U.S. stays in the Paris agreement and all nations make good on their pledges, our greenhouse gas emissions by the year 2030 will be enough to guarantee at least three feet of sea level rise by the year 2300.

Unfortunately some journalists have difficulty with numbers, reporting that we’ll have three feet of sea level rise by the year 2030. Dum dum dum dum dum…