Those of us who follow such things, know that Europe has been hit with two killer heat waves since the year 2000. Super-killer heat waves. The first, in 2003, covered much of western Europe and led to about 70,000 deaths due to heat stress. The second, in 2010, hit Russia and killed another 50,000 while destroying a third of Russia’s wheat crop (Russia is one of the largest wheat exporters in the world).

But even those of us who do follow such things, may have missed the fact that Europe has actually had three super-killer heat waves since the year 2000.


I decided to explore sustained high heat in data for daily high temperature from the European Climate Assessment and Dataset network, and I did so by exponentially smoothing the temperatures on a 20-day time scale. That way, very high values indicate high heat over a sustained period of time; perhaps that this is a good way to identify the super-killer heat waves.

The 2010 Russian heat wave is well captured by the result from Moscow:

A striking example is from Kursk:

Last year brought new record highs to many locations in northern Europe, like Gotska in Sweden: 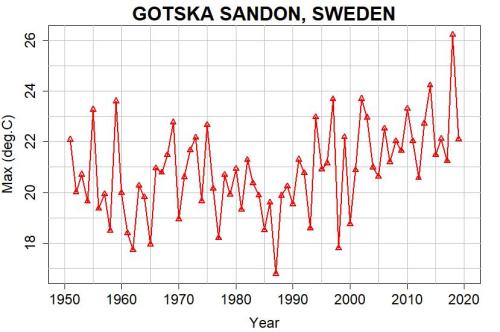 All told, 810 station records met my selection criteria. For each I recorded which year had the highest value of all, and found that the three years with the most peaks have all been this century. The biggest one of all, with the most stations reporting their highest 20-day exponentially smoothed temperature, wasn’t the super-killer Russian heat wave of 2010 or the super-killer heat wave of 2003. It was last year. 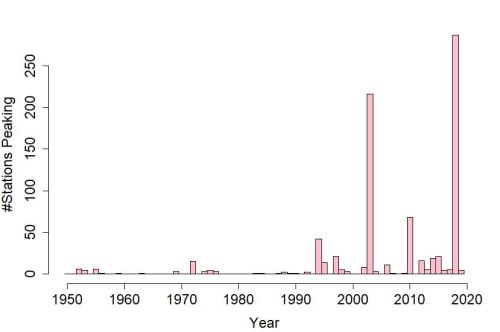 There’s a lot to do before drawing firm conclusions, but the preliminary indication is that heat waves in Europe aren’t just getting hotter and lasting longer, they’re covering a larger area too.

Thanks to Colin Letham, Tim Baumann, Aart Shakel, James Vogan, Marianne Soby, and Robert Day for kind donations to the blog. If you’d like to help, please visit the donation like below.