Roy Spencer has joined the chorus of those denying the link between climate change and California’s wildfire crisis. But rather than share scientific insight, Spencer inflicts on us his brand of superficial, crude thinking through his inevitable confirmation bias, which, when examined closely, is an object lesson in how Roy Spencer got the label “climate denier.” The old-fashioned way: he earned it.

We’ll start with total acres burned by wildfire in California since 1972 (the time span studied in Williams et al.).

Clearly there’s an upward trend, and in addition the fluctuations themselves — the wiggles up and down year to year — get bigger as the total area grows. We can “equalize” those fluctuations (a useful thing statistically) by taking the log-transform of the area burned, as did Williams et al.:

For climate variables I’ll use both high and low temperature in California averaged over the “warm season” as defined by Williams et al. (March through October), and the average precipitation during the “water year” (October through September). Precipitation shows no detectable trend during the time interval: 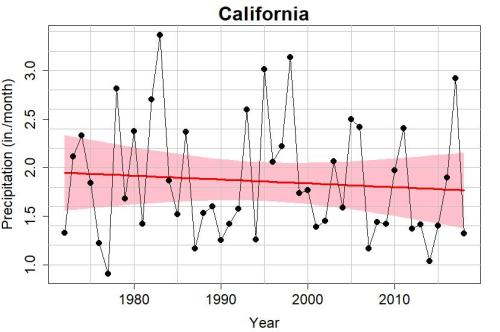 But temperatures, both highs and lows, have warmed strngly:

A crucial part of fire danger is how dry the potential fuel is. This depends heavily on something called vapor pressure deficit, or VPD. It’s the difference between how much water vapor the air can hold, and how much it does hold. When VPD is high, the air can suck moisture out of fuels with surprising speed. When VPD is high for sustained periods (as in, all summer long) it can dry out even the biggest fuels in heavily forested areas.

The increase in VPD has increased how quickly fuels dry out; it is, without doubt, one of the reasons California’s wildfire problem is so severe.

However, there doesn’t seem to be any additional correlation with precipitation. But if we make the same graph using the previous year’s precipitation, we see that the worst wildfire years tend to be those with both high temperature and lots of precipitation in the water year before the current one:

To test the idea quantitatively, I fit a model to burned area using only high temperature and precipitation. Using the current water year, the precipitation influence is nowhere near statistically significant. Using the prior year’s precipitation the significance is beyond doubt.

The “best” model I’ve found (in terms of AIC, the Akaike Information Criterion) is a model depending on time itself, a quartic function of both high and low temperatures, and precipitation during the preceding year but not the current year. The model compares to the data thus: 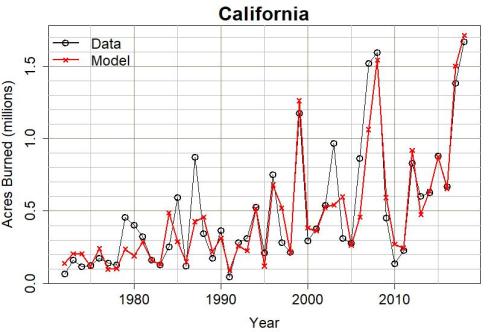 The model fit is impressive. I caution the reader that this analysis is no substitute for the more rigorous and far more thorough analysis of Williams et al. Nonetheless, the numbers make it clear that wildfire area burned is strongly related to temperature (high temperatures more so than lows) and the preceding year’s precipitation. It also depends on a time trend which does not represent any of the climate variables used. This additional trend could be due to many factors, including other climate changes (such as earlier snowmelt leading to further drying), but I suspect it’s more a reflection of some of the non-climate factors, particularly historical firefighting practices and increases in human-caused ignitions.

But the impact of climate change — specifically, of increased temperature via increased vapor pressure deficit — is evident. So too is the influence of the preceding-year’s precipitation, related to a significant amount of the variation but not the trend, because precipitation shows no trend (yet!).

If scientists have established any connection between climate change and wildfire, Roy Spencer means to dispute it. For example, he says this:

… the argument I’ve seen that excessive vegetation growth from a previous winter with abundant precipitation produces more fuel is opposite of the observation that fewer wildfires typically follow an unusually wet winter in California. They can’t have it both ways.

Spencer “supports” this statement by linking to an article — in the San Jose Mercury-News. That’s not a peer-reviewed scientific journal; it’s a newspaper. Apparently this is where Roy Spencer gets his “science.”

If he had bothered to read the science, he’d know that wildfire risk is greater when a wet year builds up fuels, then is followed by a dry year that dries them out. As Williams et al. say:

To evaluate observed and modeled trends in ﬁre‐promoting interannual precipitation volatility (wet years that grow fuels followed by dry years that dry fuels out), we examined the running 10‐year frequency of “wet‐dry events,” which we deﬁne here (building off of Swain et al., 2018) as events in which a lowest 20% water‐year (October–September) precipitation total follows a highest 20% precipitation total in at least one of the two preceding water years.

Roy, you are just plain wrong, because you didn’t understand the science. You just spouted nonsense based on nothing but an article in a newspaper.

Then Roy Spencer graces us with this gem:

In 2018, a paper was published by a university research meteorologist and U.S. Forest Service (USFS) employees from three different USFS offices that describes a simple meteorological index related to wildfire risk. They call it the Hot-Dry-Windy (HDW) index, which is simply the product of (1) the surface wind speed times (2) the water vapor pressure deficit. The vapor pressure deficit uses the same information as relative humidity (temperature and dewpoint temperature), but it is a difference rather than a ratio, which better measures the potential of air to rapidly remove moisture from dead vegetation. For example a 10% relative humidity at 40 deg. F will have low drying potential, while 10% RH at 100 deg. F will have very high drying potential.

Vapor pressure deficit? Where have I heard that before? …

He goes on to emphasize the importance of wind in spreading wildfire, and implies that the windiness is the same as it ever was. He somehow fails to make the connection that higher temperature, an obvious and strong trend in climate change, is making VPD trend upward, and that’s one of the things making wildfire are burned trend upward. As Williams et al. showed.

As for trends in these variables, Spencer says this:

Unfortunately, the website does not provide any time series of the data over the last 30 years. But I can see the technique being applied to weather station data that goes back 50 years or more, for instance the formatted weather station data available here (which is where I got the Los Angeles airport data plotted above).

Until someone does this (if they haven’t already), I think it is a mistake to blame increased wildfire activity on “climate change”, when we don’t even know if there has been a change in the meteorological events most associated with major California wildfires: the intrusion of cool Canadian high pressure areas into the U.S. Southwest.

Williams et al. already did that. They blame increased wildfire activity partly on climate change. So do I.

Until Roy Spencer stops spouting nonsense without bothering to learn the science, until he frees himself from his blatant indulgence in confirmation bias, I think it is a mistake to trust him on any subject whatever.

Thanks to Geoff Beacon, Steve Lusky, and James Owens for very kind donations to the blog. If you’d like to help, please visit the donation link below.