A new paper by Willeit et al. reports on the first successful model simulation of global climate over the last three million years. That’s a lot of years. You can find out more, from the lead author himself, at the RealClimate blog.


One of the real-world data sets they use, for comparison to their model results, covers an even longer time span: the LR04 stack, a stacked estimate of d18O (delta-oxygen-18) in sediment cores from around the world going back 5.3 million years. It’s a very good proxy for global ice volume; higher numbers mean more ice, lower numbers less ice.

Here’s the data along with a thick red line showing the long-term trend, and I inverted the y-axis (as did Willeit et al.) because global ice volume is itself a proxy for global temperature; colder means more ice, hotter means less (physics doesn’t get any more basic), so “hot” is at the top and “cold” at the bottom: 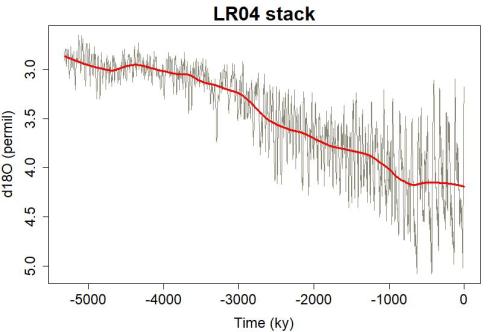 When I call the red line a long-term trend, I mean long; the smoothing time scale is about half a million years. It tells a story of long slow decline into icier and icier conditions, although we may have levelled off over the last million years.

But there’s more to the data than the very-long-term trend. There’s all that wiggling around up and down, which it turns out isn’t just random. It shows structure, in fact it shows cyclic behavior, and although its cycles look fast on the 5-million-year time scale of the graph, they’re only “fast” by comparison; these cycles have periods of tens of thousands of years.

I went looking for periodic/pseudoperiodic behavior with a wavelet transform. In the graph below, the x-axis is time (in thousands of years) to show how periodic behavior may have changed over time. The y-axis is frequency, the number of cycles per thousand years. The color indicates how active that frequency is at that time. 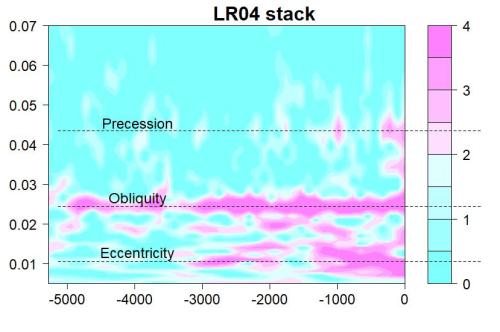 I’ve also put in some dashed lines to mark frequencies that are of special interest because we find them in another set of data: the changing parameters of earth’s orbit. I’ve even labelled them, “Obliquity” for the cycle of how tilted earth’s axis is, “Precession” for the cycle of how that axis itself spins around the sky, and “Eccentricity” for (one of) the cycle(s) of how flattened earth’s orbit is.

The most consistent strong response is at frequency of 0.0244 cycles per thousand years, or 1 cycle per 41,000 years. In fact, for much of the time span this is the only active cycle in the data; the ebb and flow of ice growth and decay was ruled by the cycle of earth’s obliquity. Some have even referred to most (but not all!) of this time period as the “41-ky world” (dominated by the 41,000-year cycle) 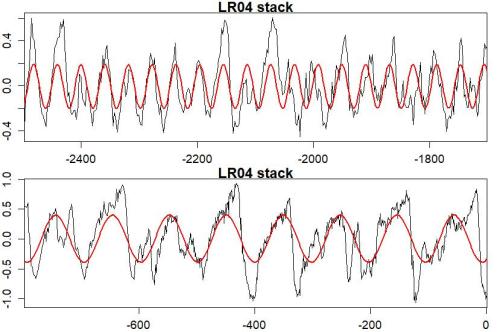 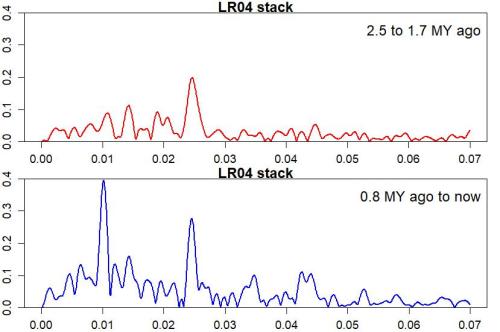 I’ll note that for the most recent segment, there is also some activity (not strong, but there) around frequencies from 0.042 to 0.044 cycles per thousand years (roughly 23,000-year cycles, like precession).

We have oscillations at three primary frequencies, but all of them seem to change throughout time. I estimated their time evolution using windowed Fourier analysis, and found that they have strengthened and weakened thus: 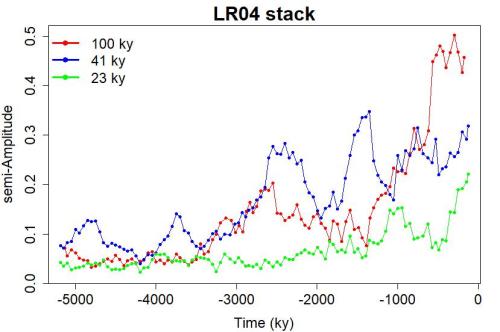 The waxing and waning of these cycles mark the progress of geologic epochs over the past five million years. About 2.6 million years ago, the 41 kY cycle (obliquity) got stronger, and has remained so since (despite continuing to fluctuate in strength). This is the end of the pliocene epoch and the beginning of the pleistocene, which continued until a “mere” 12,000 years ago when the holocene epoch began.

And that is one of the things the new paper has found. Their model successfully explains why the mid-pleistocene transition happened. For the best explanation of that, I refer you to the article at the RealClimate blog, or to the paper itself. 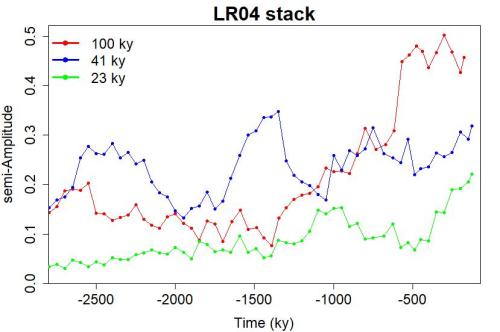