One of those things, which happened to come up in conversation recently, is that climate change has its most profound effect on extreme events. Climate change is a change in the probability function (the odds for each possible outcome) of weather, and when you look at probability functions you find that if they change in the way we expect them to, it can increase (or decrease) the chance of extremes by a surprising amount.


Zagreb-Gric, Croatia, is smack-dab in the middle of one of the fastest-warming regions of Europe. It has already warmed by about 3°C (5.4°F) since the year 1880 (here are annual averages of temperature anomaly): 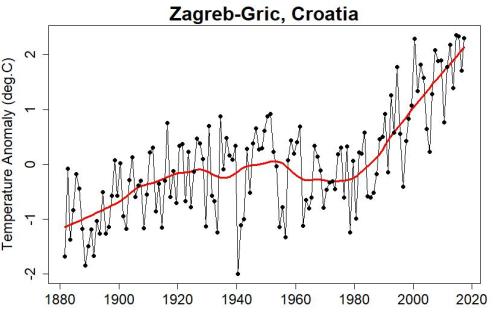 The local warming is especially pronounced since around 1980. It’s entirely possible that by the year 2040, this region will have heated up to 4°C (7.2°F) above its pre-2000 average.

Let’s talk about the daily high temperature during the month of July. We can get a decent picture of its climate — or at least, what it used to be — by taking all the high temperatures on July days prior to the year 2000, and making a histogram:

Zagreb can get pretty hot during July, but not extremely so. I’ve delineated three regions: temperatures as high as 30°C (86°F), which I call “hot” days, with those reaching 35°C (95°F) being “VERY hot” and days peaking at 40°C (104°F) and above are “WICKED hot.” About 20% of July days in Zagreb reach “hot” status, while “WICKED hot” has only happened once in nearly 140 years of record-keeping. 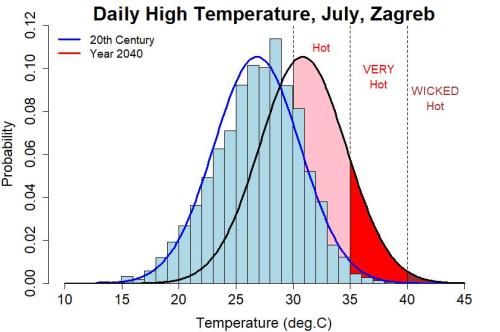 Roughly 60% of July days will be hot days, three times as likely as they were before 2000. VERY hot (dangerously so) will be ten times as likely on a July day as it was. And “WICKED hot” temperatures will happen fifty times as often as they used to. When temperatures of 40°C (104°F) go from “once in a century” to “every other year,” there are consequences.

Heat waves are bound to come in the future, and they’re bound to be worse than the people of Zagreb have seen before. They will bring sickness and death, failure of critical infrastructure (like the electric grid) from the stress of high temperatures and high demand, and a host of other surprises we’re probably not going to be happy about.

Temperature is just one aspect of weather, and when it or any other changes its odds, the events we notice (and usually, suffer the most damage from) are those that used to be so rare we didn’t even worry about them, but become common enough that you can’t get through life without seeing them many times. When Houston suffers a once-in-500-years flood, people notice. When that happens three years in a row, smart people conclude that the odds of what used to be a once-in-500-years flood are no longer once in 500 years.

Unfortunately, such damaging extremes come and they go. We rejoice to be rid of them, when the flood waters recede or a cool evening finally arrives, but in the midst of our rejoicing for relief and all the work to recover from the damage, how soon we lose sight of the root cause. So far, we have neither worked to restrain how bad the future will get, nor prepared for the changes we know we can’t avoid.