Arctic warming is more like three to four times as fast as global warming.


Some global temperature estimates (e.g. that from HadCRU) simply omit much of the Arctic, which makes it difficult to deduce how the Arctic has been warming. Others (specifically, NASA data, the extended HadCRU data from Cowtan & Way, and the data from Berkeley Earth) deduce pan-Arctic temperature from nearby measurements. This is based on the fact (not supposition but fact) that temperature change is strongly correlated in nearby areas, the correlation extending as far as 1200 km.

Let’s take a look at the data from NASA, and from Cowtan & Way, for the region from latitude 64°N to the pole, which we’ll call the Arctic. We’ll also look at their global data, in order to compare the Arctic warming rate to the global warming rate. In order to treat the two data sets on an equal footing, I’ll restrict attention to the time period from 1880 through 2017, when both data sets have coverage.

Here’s how Arctic warming (in red) compares to global warming (in black) according to the NASA data: 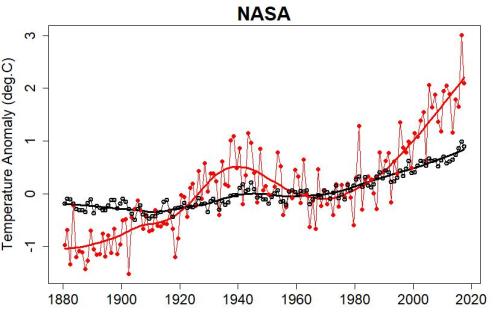 To compare the present rates, I’ll use just the data since 1985 because there are signs (especially in the data from Cowtan & Way) that the modern rate for the Arctic starts a bit later than it does for the planet (which begins its modern rate around 1975). That gives me this:

What about the data from Cowtan & Way?

According to these data, while the globe has warmed 1.1°C the Arctic has gone up by 3.5°C, a total rise 3.2 times as high. Using data since 1985 to estimate the modern rate we get this:

It’s interesting to examine the warming patterns for different seasons of the year. Here’s the full time span for NASA data (1880 through 2017):

Winter is warming fastest in the Arctic, while during summer the Arctic is warming only a little faster than the globe as a whole, and much more slowly than during other seasons. This is likely due to the fact that there is still ice in much of the Arctic during summer, so temperatures have a hard time getting much above 0°C (32°F); added heat, rather than raising temperature, is consumed by the melting of ice.

Looking at data since 1985 we have this: 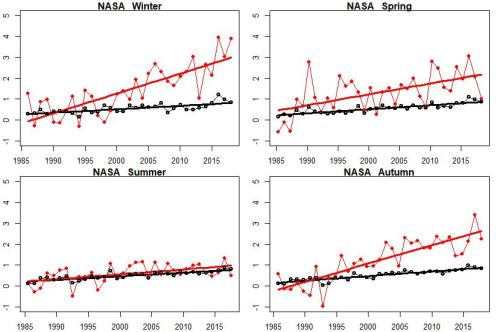 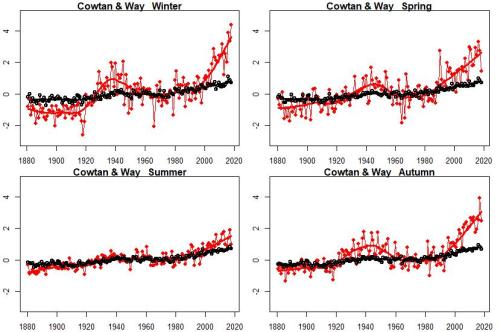 Again summer is warming considerably more slowly than other seasons, but not nearly as much so as according to the NASA data. The rates since 1985 are these:

The faster Arctic rates from the Cowtan & Way data rather than the NASA data are due to the different ways they interpolate to cover the Arctic. I have more confidence in the Cowtan & Way data because they use Kriging to do so; it’s an ingenious interpolation method which is far superior to others. Still, both data sets have their advantages and disadvantages; I’d say it’s premature to say that one is definitely preferable to the other.

The bottom line is that any way you look at it, the Arctic is warming faster than the globe as a whole, and saying it’s “twice as fast” is quite an understatement.