I read an article yesterday about the impact of global warming of night-time temperatures. They are significant. The article also talked about night temperatures generally warming faster than daytime temperatures. That made me wonder … where and how is this happening in the U.S. — especially in recent decades?

Fortunately, both high and low temperatures are reported for all 344 climate divisions in the lower 48 states of the U.S. I decided to look just at the data since 1985, in order to focus on what’s been happening recently (a bit more than the last three decades). The process is actually pretty simple: for each climate division, I fit a straight line to the post-1985 diurnal temperature range, that being the high temperature minus the low temperature.


Here are the results, with red circles marking divisions where daytime has been warming faster than nighttime, blue circles where night has warmed faster than day, and larger dots marking more pronounced differences:

Most of the country has indeed warmed faster at night recently, but not all. The southwest has gone the other way, and in many regions where the trend is as expected (night faster than day) the effect is slight. In the upper midwest (North Dakota and Minnesota), and along the eastern seaboard, we see what I expected with night warming considerably faster than day.

I also wondered, how do these patterns vary throughout the year? So I did the same analysis, but using only months for a single season.

The wintertime pattern is similar, but more pronounced in northern states: 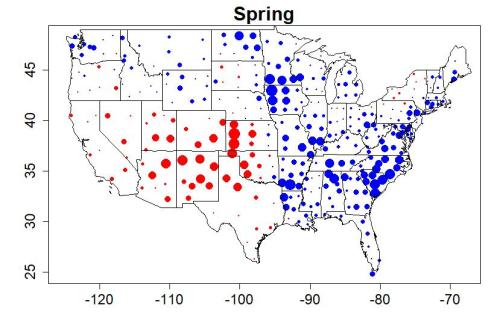 Summer shows a marked difference between the eastern U.S. and the western: 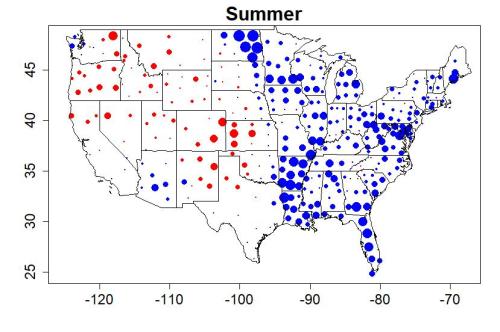 In autumn, much, in fact most, of the country shows faster daytime warming than nighttime. Strong faster-at-night warming is confined to the Pacific northwest and the mid-Atlantic coast: 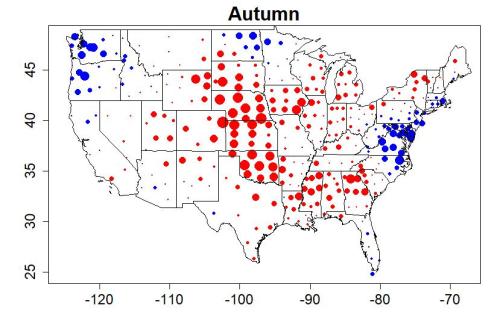 I’ll emphasize that these results are for the last 3+ decades. The geographical patterns are quite interesting. What they mean … I don’t know.

18 responses to “Night and Day”