I’m glad I started the Climate Data Service, because it makes working with climate data easier. Even for me. I could access and study it before, but now it’s all in one place and one format, and the ease of use is a good motivator for closer study.

Something I’ve just been looking at is the relationship between sunspot counts and solar irradiance. I’ve used TSI (total solar irradiance) to estimate the influence of solar variations on global temperature, but reliable records don’t start until about 1976 when satellite observations began. Before that, we have to rely on proxies, of which the most common is sunspot counts. There are many reconstructions of solar irradiance which use more, but I’m not aware that any of them can be considered particularly better than the others.


But just how good a proxy is sunspot counts? I can directly compare monthly averages of TSI as measured by satellites, to sunspot numbers (re-scaled to estimate TSI):

There’s no doubt that sunspot numbers make a useful proxy for solar irradiance; more sunspots correlates with more solar energy output. But the proxy isn’t perfect (none ever is), and there are some notable shortcomings. In particular, during cycle 23 (the 2nd-to-last on the graph) sunspot counts (in red) weren’t as high as the previous two cycles even though solar irradiance was just as high (a tiny bit higher, even), and when the minimum which followed is estimated by sunspot counts, it doesn’t dip quite as low as solar irradiance actually did.

A natural thing to do is to compare the two variables directly, rather than comparing their time series. It looks like this: 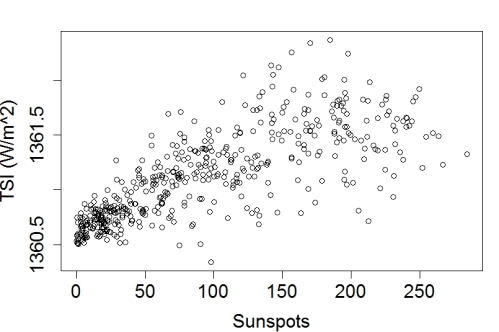 It seems that as sunspot count rises so does TSI, but the rise isn’t linear. TSI increases more slowly when sunspot count gets bigger, a result which is easily confirmed statistically and is visually more clear by computing average TSI over 10-wide sunspot intervals, and smoothing (by modified lowess): 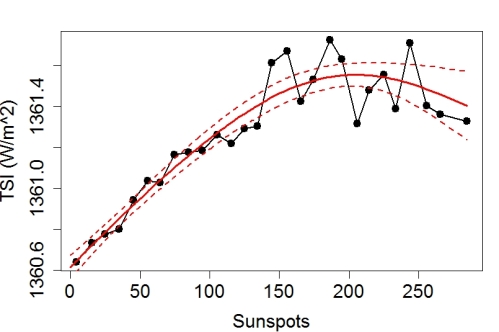 Just for fun, I played around with various power-law relationships (other than linear). The best I’ve found so far is to estimate TSI by the square root of sunspot count. That generates time series which compare thus:

The correlation is slightly improved over an estimate based on bare sunspot counts, although the improvement isn’t large.

If we use the square-root-sunspots proxy to estimate TSI since 1850, it looks like this:

We get a better idea of the longer-term changes, with the solar cycle influence reduced, by simply computing 11-year moving averages:

Now we can see that part of the cause of warming from 1900 to about 1940 may indeed be the increase in solar output. We also see quite a drop after 2000, not just because solar cycle 24 (the most recent) is less than average, also because its preceding minimum was longer-lasting than average.

Even so, the difference between the square-root proxy and the simple sunspot-count proxy is quite small, and probably won’t make much difference when estimating the sun’s influence on global temperature. I’ll keep you posted on that.

10 responses to “Sunspots and Solar Output”