Fires which burn 1,000 acres or more are considered “large.” That’s well over a square mile (1.5625 to be precise). Imagine a wildfire consuming an entire square mile — it’s huge, clearly a devastating conflagration.

So when I learned that the “Rocky fire” in California had burned through more than 100 square miles, I knew it was huge beyond huge, the biggest fire I’d ever heard of. It’s the kind of raging inferno that costs so much money, property, even lives at times, that takes so many resources to fight, it’s more than just a drain on resources, it’s a disaster, at least for those who live in the vicinity.


It seems these days that in the western U.S., fires burning more than a square mile are no longer the exception that makes you wonder what’s gone wrong. These days, in the U.S. west they seem to be the norm. And we know what’s gone wrong.

A lightning-sparked fire in the Helena National Forest northeast of Lincoln has grown to 2 square miles since Monday. Its rapid growth led to the evacuation of a dozen nearby cabins, most of which are second homes…

What’s wrong is man-made climate change, sometimes called “global warming.” It has created enough heat in the western U.S. to bring the kind of scorching temperatures that make wildfire grow, and it has made the western drought so much worse, the snowpack so much less, that the forest, the grassland, the brush, the scrub in the desert, are dry as a bone, ready to go up like a matchstick.

Wildfires racing through drought-stricken Southern California have burned over three square miles of land and two cabins. A fire erupted shortly after 1 p.m. Friday in the Angeles National Forest northeast of Los Angeles. Gusty winds quickly drove the flames through 800 acres of brushy ridges near Glendora. Two campgrounds containing at least 40 people have been evacuated….

Over the last few decades there has been quite an increase in acres burned by wildfire in the U.S. And it is not due to factors like land use or fire control practices. Those factors have an effect to be sure, but the science has been studied in detail and the result is clear: the real cause of the tremendous increase in wildfire burn area is man-made climate change: global warming. 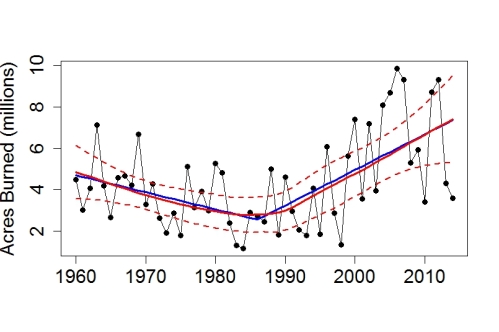 The increase is, not to put too fine a point on it, “statistically significant.” This can easily be established with “changepoint analysis,” and with other methods too. The model we get from changepoint analysis (plotted as a blue line) is in excellent agreement with what comes from a smoothing method (lowess smooth as a red line, with error bars as dashed red lines).

And a blaze northeast of Colville scorched almost 5 square miles and forced evacuations at campgrounds in the area.

But that won’t stop deniers denying, in large part because not every year is a horrific wildfire year. They take any year that does’t break the record or even reach to extremes, and hold it up as their version of “proof” that there’s nothing wrong. Think I’m kidding? Just to mention a single denier (he’s hardly the only one), that’s exactly what conservative columnist George Will does regularly. In fact, when it comes to global warming, cherry-picking like that is his stock in trade.

In eastern Oregon, a lightning-caused fire south of Baker City moved west toward Black Mountain and several summer homes. People in that area and those along a creek to the south were ordered to evacuate. The 20-square-mile fire burned an unknown number of structures in a neighborhood Thursday….

Any year at all that isn’t one of the worst on record, is “fuel” for their special brand of misdirection. You may have noticed in the above graph, for instance, that both 2013 and 2014 weren’t among the worst years for U.S. wildfire. Then why aren’t we hearing from them lately about how an increase in wildfire is one of Senator Inhofe’s “hoax” stories?

Because this year is shaping up to be the worst on record. 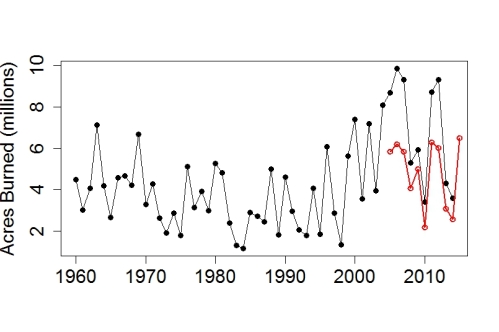 Note that this year has the most acres burned by this date. No wonder deniers don’t seem to want to talk about wildfire … except to blame it on something else. Anything, except of course the real root cause: global warming.

Hundreds of people were evacuating from the central Washington city of Chelan as lightning-sparked wildfires advanced. Flames and smoke were visible from downtown.

The fires were among those being battled throughout Washington, including an uncontained blaze near Cougar Creek that had burned 28 square miles near the Yakima Indian Reservation.

In fact there’s a distinct possibility that this year could not only break the record, it could reach a new milestone: over 10 million acres burned. The highest on record is 9.87 million acres in 2006, but that record may fall.

Two fires have charred dry Lower Lake, the most recent burning 38 square miles of thick brush and oak trees in Lake and Napa counties. It is more than halfway contained.

An earlier, larger fire in the same area was finally fully contained Friday more than two weeks after it broke out. The blaze destroyed 43 homes…

If it does, it won’t be the only unpleasant milestone we reach this year. We’re very likely to set a new record for hottest year, as 2015 is on pace to blow out 2014, the current hottest year on record. It’s also poised to rise above pre-industrial temperature by a full degree Celsius, halfway to the 2-deg.C limit which some think is a “safe” upper limit, but really isn’t safe … it’s just a limit which might be very very bad but we still might escape total disaster. And the level of atmospheric CO2, even after allowing for the seasonal cycle, is itself about to cross over 400 ppm.

A fire on the Warm Springs Indian Reservation in rural central Oregon exploded to more than 50 square miles Friday, forcing evacuations of a rural subdivision and a resort that had 400 guests booked Thursday night…

President Obama is proposing the “Clean Power Plan” in an effort to bring CO2 emissions under control, but Republican politicians are frothing at the mouth to criticize it. I say it’s not enough, but at least it’s a start. They say their usual, tired bullshit about “destroy the economy” and “job-killer” and “freedom!” All the while, they deny the reality of global warming, and/or the fact that we’re causing it, and they certainly deny that we should, or even could, do anything about it … while protesting that we should have a “debate” on the issue because they are “not a scientist.” It’s just their excuse to put the corporate profit of their big-money cash donors ahead of the safety and health of us and our children.

A giant blaze on the Idaho-Oregon border grew to 414 square miles Friday, scorching grassland ranchers need to feed cattle and primary habitat for sage grouse, a bird being considered for federal protection…

As for “ruining the economy,” how’s this for you?

The U.S. Forest Service is spending about $100 million a week fighting wildfires and will exhaust its firefighting budget next week, Agriculture Secretary Tom Vilsack said Friday…