In the last post we saw how ignorant George Will is about global warming and its consequences — yet nonetheless Will is willing to spew his ignorance in order to influence public policy.


We showed quite clearly, with no ambiguity, that when it comes to wildfire in the U.S. the heat is rising. This is especially true in the western states, as we’ve looked at in detail before. George Will is wrong — willfully wrong — to imply with an offhand and cherry-picked statistic that wildfire is not on the increase in the U.S.

But he wasn’t just wrong about wildfires. He was also wrong — willfully wrong — to suggest that old, tired canard, so often trotted out when the real consequences of global warming are laid bare, that even if there is a problem (like increasing wildfire) it’s not because of climate change.

I pointed out that the actual science links increasing U.S. wildfire to global warming. One reader expressed a desire to see how wildfire activity relates to temperature. Let’s go one better. Let’s take each of the 11 western states reported about here and model the number of fires over 1,000 acres as a function of temperature. We’ll use monthly temperature data from NCDC for each individual state. Then we’ll fit the annual number of fires over 1,000 acres to that year’s monthly temperature anomalies, using Poisson regression (which is the right choice since the target variable is counts). We expect that if Westerling et al. are right, the dominant influence should be from hot conditions in Summer, which makes the peak of fire season hotter, and in Spring, which causes earlier snowmelt and increases the chance of dry conditions later in the year.

The most stunning fit of any of the 11 western states to the temperature data is for Wyoming: 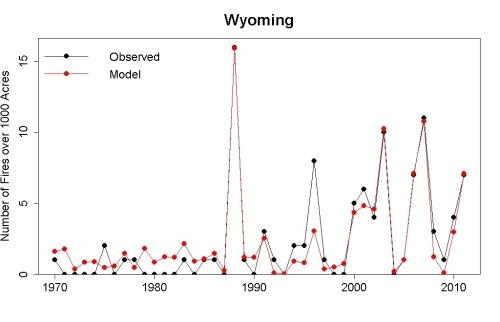 The statistical significance is … how shall one say? … perhaps the appropriate scientific term is “through the roof.” Yes, the number of large fires in Wyoming really does depend on temperature. Examination of the model coefficients shows that in this state at least, the real influence is from temperature during June, July, and August. Hotter summer means more large wildfires in Wyoming.

A state which shows a stronger influence from Spring temperature than from Summer heat is Idaho: 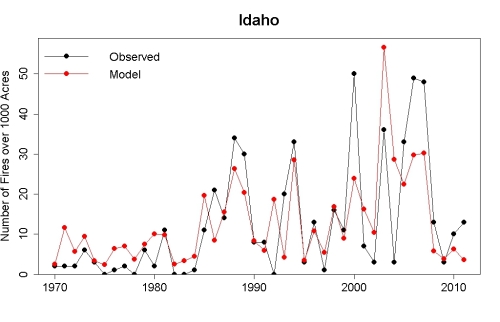 Just for a few more examples, here are the model-observation comparisons for Montana and Utah: 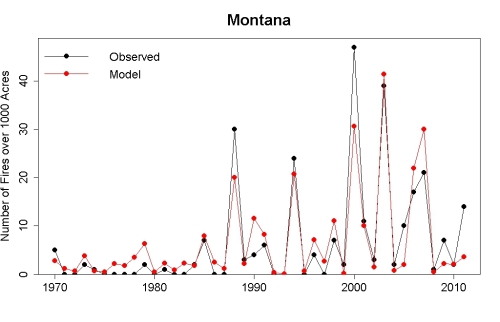 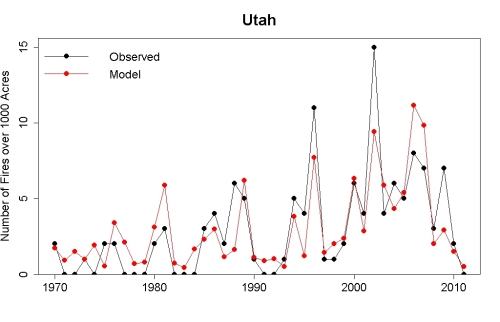 It’s not just that western states’ fire data are so well accounted for by temperature data. It is also noteworthy that certain months have a consistently strong impact, and that those which most strongly correlate with wildfire activity are exactly the months expected to do so. The strongest overall is temperature in July, closely followed by August, with June a weaker third but still significant. This bears out the hypothesis that hotter summer temperature leads directly to enhanced threat of wildfire. Also showing strong impact is warm temperature in April, which bears out the hypothesis that hotter spring temperature also enhances wildfire risk, probably by quickening snowmelt thereby leading to drier conditions later in the year.

One odd result is that February temperature is sometimes anti-correlated with the number of wildfires. Perhaps warmer Februaries also have more precipitation, reducing wildfire risk by making conditions wetter later during the year — but I haven’t looked at the relationship with precipitation and I don’t know enough about fire risk to suggest this explanation with confidence.

But some things I can say with confidence. Wildfire risk is on the increase in the U.S., especially in western states. Warmer temperature is certainly part of the reason, probably most of it. Hotter summer and hotter April seem to be the dominant factors.

George Will is wrong about wildfire risk in the U.S. Willfully wrong. Having posted about his utter folly twice in a row, I hope his “ears are burning.” Because that’s not all.