PINE BEETLES AND FIRE HAZARD IN THE BLACK HILLS

The recent extreme infestation of pine trees in the Black Hills National Forest by the mountain pine beetle has raised concern that the large number of dead trees has increased the risk of wildfire, and that it is more likely that wildfires will escalate to enormous size. Some regard the enhanced risk as so great that it creates an emergency situation, requiring immediate and extreme intervention to ameliorate the danger to public safety and property.

Such concern is entirely natural, based on both intuition and considerable experience of forestry experts and firefighters. Dead trees rapidly lose their moisture content, which makes them more flammable. Dead pine needles fall to the forest floor, increasing the surface fuel load, and eventually the dead trees are more susceptible to falling, which increases the load of large fuels on the surface. The extreme number of dead trees due to pine beetle tree-kill has created a situation which many regard as “a tinderbox primed for wildfire.”

The extremity of public concern was well summarized by Richard Finn, a landowner in Sturgis, SD, who testified in a Congressional hearing in 2002:

Now, a massive swath of bug-killed trees marks the landscape. To a man, the fire experts with whom I’ve spoken assess this area as having tremendously magnified fire risk, so-much-so as to be regarded inevitable. They fear the fire intensity these conditions will create, coupled with poor access and steep terrain, will furthermore render any fire ignited in Beaver Park completely unstoppable. The infestation shows no sign of slowing, the fire danger shows no sign of lessening, and as such, I fear each day for the safety of my family.

What is lacking in these evaluations is hard evidence that pine beetle infestation greatly increases fire hazard. A growing body of scientific research suggests that this is simply not the case. As Roy Renkin, Vegetation Management Specialist for Yellowstone National Park, stated in a NASA press release about a detailed study of the relationship between pine beetle infestation and fire hazard in which he participated,

I’ve heard [the tinderbox analogy] ever since I started my professional career in the forestry and fire management business 32 years ago. But having the opportunity to observe such interaction over the years in regards to the Yellowstone natural fire program, I must admit that observations never quite met with the expectation.

Is it possible that pine beetle infestation has much less impact on fire hazard than is generally believed, even by many experts? What does the latest scientific research indicate? What can specific data from the Black Hills region tell us?

Historical data on wildfire occurrence in the Black Hills is tabulated by the Wildland Fire Suppression divison of the South Dakota Department of Agriculture. Fire history was reconstructed from historical reports dating back to 1910. Here are the reported fires, indicating the year in which they occurred (on the x-axis) and the acreage burned (on the y-axis): 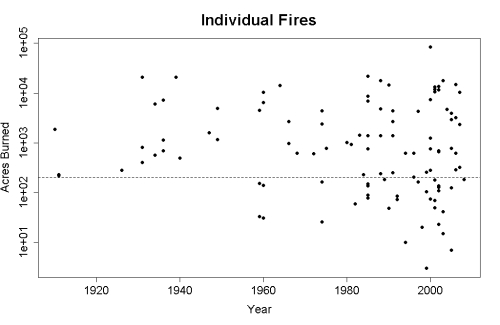 Note that the y-axis is a logarithmic axis, so each doubling of fire size corresponds to a constant increase in the distance up the y-axis. Note also that there’s a thin dashed line at 200 acres burned (the dashed line may not be easily visible in many browsers, but if you right-click the graph and select “view image” you’ll probably get a much clearer view).

It’s obvious that prior to 1959, no fires were recorded which burned less than 200 acres. This is a selection effect, not because such fires didn’t happen, but due to the fact that smaller fires were less likely to be detected and recorded long ago than they are today. Therefore it’s a much better idea to restrict study to fires burning at least 200 acres, so that the data will be far less affected by under-reporting of small fires early in the record. We can call these large fires, and for most of the record, it’s very unlikely that fires at least as big as 200 acres burned (nearly a third of a square mile) would have escaped detection.

A simple, but effective, way to gain insight into the changing fire history of the Black Hills, is simply to count the number of large fires occurring each year:

There are visible signs of greater wildfire numbers in the last several decades. The increase seems to begin in 1985, which witnessed 5 large fires, the first year in the record showing more than 3. In fact, nine years since 1985 have had 3 or more large fires, an event which only happened twice before 1985, during the extreme drought of the 1930s.

Surely something has increased the risk of wildfire in the Black Hills. But what?

WILDFIRE IN THE WESTERN U.S.

A study published in 2006 (Westerling et al., Warming and Earlier Spring Increase Western U.S. Forest Wildfire Activity, Science, 313, no. 5789, 940-943) noted that wildfire activity has increased since the mid-1980s, not just in the Black Hills but througout the Western U.S. The authors studied the relationship of wildfire occurrence to both climate and land-use histories, concluding that climate rather than land-use factors dominated the increased fire occurrence:

Their study clearly indicates that warming spring and summer temperatures throughout the region have brought about earlier spring snowmelt, which causes drier conditions late in the year, particularly the latter part of fire season. They also cause warmer, drier conditions during much of fire season, which increases the risk of wildfire and exacerbates those fires that do occur. Their bottom line is that climate change, rather than land-use factors, dominates the recent increase in wildfire frequency. They particulary identified warmer Spring-Summer temperature as a major factor in fire risk in the Western U.S.

Another factor known to have a strong influence on wildfire is drought. Times of drought, especially severe drought, strongly enhance fire risk and severity. In fact, the earliest period for which the Black Hills show exaggerated wildfire occurrence was the 1930s, a time of severe drought throughout the region.

The situation can be clarified if the impact of known factors, in particular drought and increasing Spring-Summer temperature, can be accounted for in fire data, in order to isolate the remaining changes and look for their relationship to other factors. A mathematical model of fire occurrence based only on drought (as measured by the “Palmer Z-index“) and Spring-Summer temperature accounts for much of the change observed in wildfire in the Black Hills:

The residuals (what’s left over after the modeled factors are removed) still shows enhanced wildfire activity in recent decades:

Now we can compare these remaining, “residual” wildfire changes to other factors which may influence wildfire. One way to do so is to examine what’s called the cross-correlation function, which looks for relationships which may have a delayed effect over time. The cross-correlation of residual wildfire activity with pine beetle tree-kill shows no sign of any correlation at all: 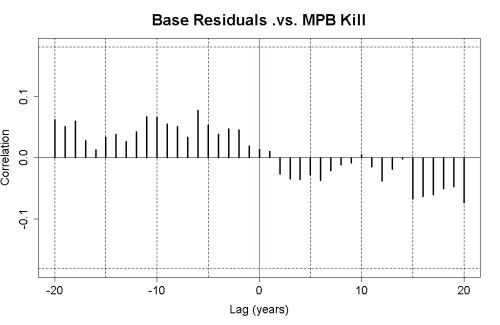 There is, however, significant cross-correlation between residual wildfire activity and the amount of timber harvest over time:

This might suggest that greater timber harvest increases the risk of wildfire, with a time delay of about 12 years. But “it ain’t necessarily so.” Timber harvest has increased over the years, so to a large degree the timber harvest resembles a steady increase over time. Perhaps there has simply been an increase in wildfire activity over time due to some other factor, and the timber harvest simply mimics this effect, acting as a “proxy” for a simple time trend.

MATHEMATICAL MODELS INCLUDING OTHER FACTORS

A more complex model of wildfires, including drought conditions, Spring-Summer temperature, and timber harvest does a much better job of explaining the observed changes in wildfire activity. So too does a model using a simple linear time trend instead of timber harvest data: 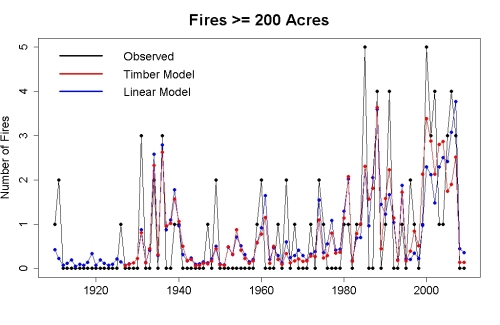 Statistical tests comparing these two models find that they’re about equally good at explaining the observed changes — so it can’t really choose between them.

One can go further, including yet more factors in the model, but those attempts failed to improve the situation — neither more influence from timber harvest, nor the combination of timber harvest with a time trend, nor (more importantly) including pine beetle tree-kill in addition to other factors, gives a better model of Black Hills fire history. In fact, when pine beetle tree kill is included in the model it indicates that greater pine beetle infestation actually reduces fire risk — but this influence is not statistically significant so it’s likely to be merely a chance result brought about by the randomness in the data.

It is also possible to compare the likelihood of very large fires recently to previous decades. Since 1985 the Black Hills have witnessed more extreme wildfires than before, but comparing the distribution of fire size before and after the recent change in “fire regime” indicates that this is simply because there are more wildfires, period.

The bottom line is that data for the Black Hills region do not support the idea that pine beetle infestation has increased the risk of wildfire occurring, or of fires which do occur escalating to extreme size. This doesn’t prove that there’s no effect — absence of evidence is not evidence of absence — but it does show that even if an effect is present, it’s not nearly so severe as has been claimed in public and policy discourse.

Several very recent scientific publications have specifically addressed the effect of pine beetle infestation on fire hazard. Some have indicated enhanced risk (Schoennagel et al. 2012, Effects of Mountain Pine Beetle on Fuels and Expected Fire Behavior in Lodgepole Pine Forests, Colorado, USA. PLoS ONE 7(1): e30002) but not as great as has often been claimed, some suggest little impact, or even reduced risk soon after infestation and possible enhanced risk much later (Simmard et al. 2011, Do mountain pine beetle outbreaks change the probability of active crown fire in lodgepole pine forests?, Ecological Monographs, 81(1), 2011, pp. 324, and Tinker et al. 2009, Reciprocal interactions between bark beetles and wildfire in subalpine forests: landscape patterns and the risk of high-severity fire, Joint Fire Science Program project no. 06-2-1-20). This is an area of active research and a consensus has not yet emerged, but current research definitely belies the notion that pine beetle infestation creates a “tinderbox primed for wildfire.”

Clearly, the Black Hills region, like most Western U.S. forests, is at greater risk of wildfire than during most of the 20th century. But there is little, if any, evidence to implicate pine beetle infestation as the culprit in that increased risk. Other factors, including drought, changing climate conditions, and perhaps changes in forest management (including fire suppression) are at work, and their impact seems to overwhelm the results of pine beetle infestation.

Wildfire hazard is a crucial issue which must be addressed with as clear as possible a perception of the actual risk factors. A focus on pine beetle infestation seems misplaced, threatening to draw attention away from factors which have strong and demonstrable impact on fire hazard and to divert limited resources to less productive strategies. Surely, excessive rhetoric about the urgent fire danger posed by pine beetle infestation, sometimes to the point of hysteria, does not serve the public interest.