Stupid is as Ted Cruz does

Ted Cruz denies that global warming is even happening.

Appearing on “Late Night with Seth Meyers,” Cruz had this to say:

Many of the alarmists on global warming, they’ve got a problem because the science doesn’t back them up. In particular, satellite data demonstrate for the last 17 years, there’s been zero warming.”

Cruz was criticized by California governor Jerry Brown for denying scientific reality. On Sunday Cruz said that “global warming alarmists” like Brown “ridicule and insult anyone who actually looks at the real data.”

Let’s look at the real data.


To get at the truth of whether or not there’s been warming, let’s look at 5-year average temperature. Satellites began monitoring the atmosphere’s “microwave brightness” since about 1979, and that information is used to infer the temperature of the atmosphere. It’s easy as pie to average the temperature over 5-year time spans, starting with 1980 to 1985, ending with the 2010-2015 interval. That’ll tell us the real story of whether there’s been warming or not — it might even inform Ted Cruz, if he’s willing to look at the real data without denying reality.

Here it is, from UAH (the University of Alabama at Huntsville). [Note: I’d love to hear Ted Cruz complain about the choice of data — so I can inform well-known climate deniers Roy Spencer and John Christy that Ted Cruz might suspect them of faking the data to make it look like the globe is warming.] 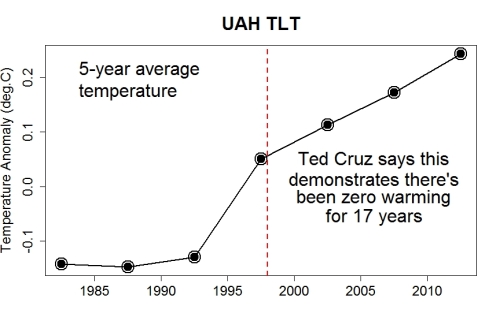 68 responses to “Stupid is as Ted Cruz does”