Both NASA and NOAA report 2014 as the hottest year on record. Despite the new #1, neither the news itself nor the response to it has surprised me.


The news that last year was so hot is certainly no surprise. The simple reason is that for the last 15 or 20 years, let’s say since the turn of the millenium just to be specific — you know, since back when we expected global warming to continue without slowing down — global warming has continued and shows no sign of slowing down.

As a matter of fact, according to the NASA data this year is dead on the projection we would have made back then by using the “global warming continues without slowing down” hypothesis. By the time 1999 came to a close, a warming trend was abundantly clear: 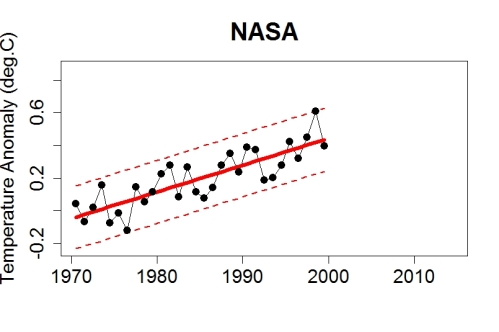 But besides just rising with the trend, temperature fluctuates up and down from year to year; hence the dashed red lines above and below the red trend line showing the likely range. Assuming global warming continues without slowing down, we would have expected this: 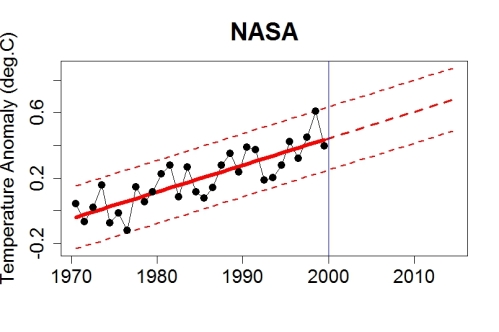 This is what actually happened: 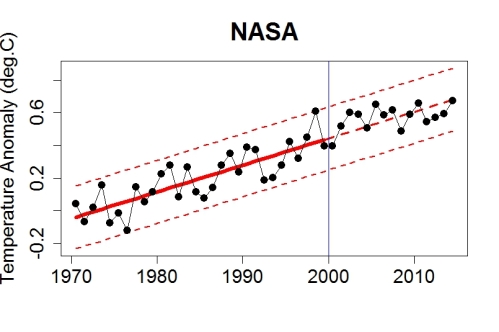 Just what was expected, that’s what actually happened.

Unbelievable as it may seem, they actually do. While the data have followed the global-warming-continues-without-slowing-down pattern just about as closely as one could have imagined — this year right down the middle — they still insist that global warming has slowed down. They like to call it a “pause.”

Methinks they do protest too much. Perhaps they fear that a record year really does threaten their beloved “pause.” But that’s not the real threat at all, it’s the fact that the data have followed the global-warming-continues-without-slowing-down pattern just about as closely as one could have expected, because all the while they’ve been bellowing about the pause that never was.

But the record year does do this: it makes it harder to sell the whole “pause” idea. And for many, it really is the “pause” that matters. It’s the propaganda keystone that enables Ted Cruz, new chairman of the Senate subcommittee on Space, Science, and Competitiveness, to make statements like this:

The last 15 years, there has been no recorded warming. Contrary to all the theories that — that they are expounding, there should have been warming over the last 15 years. It hasn’t happened.

I suspect that Cruz’s claims are what he has learned to say, again and again, from the experts at crafting persuasive “spin” for any issue, the spin that doesn’t just captivate the politician’s target audience, it captures the politician too. These days that spin relies heavily on the so-called “pause.” I can’t say I’m surprised by Cruz’s comments, or even claim to be surprised that some who claim to be scientists are actually prepared to defend such a statement.

Based on the vehemence of their reaction, the record year is something of an embarrassment to the “pause” crowd. Heck, the next time Ted Cruz says such a thing at a press conference some sassy reporter might ask him, “But what about last year being the hottest on record?” Perhaps Cruz will respond by saying he’s not a scientist.

They just don’t seem to realize that the real embarrassment to their precious “pause” is the trend.

63 responses to “It’s the Trend, Stupid”