First let’s look at the warming rates for each month of the year, for the entire period of record (1895 to the present):

February shows the most warming, with March not too far behind. All 12 months show a warming trend, and most of them are statistically significant.

If, however, we focus on a very recent time frame, just the data since 1990, the story is quite different: 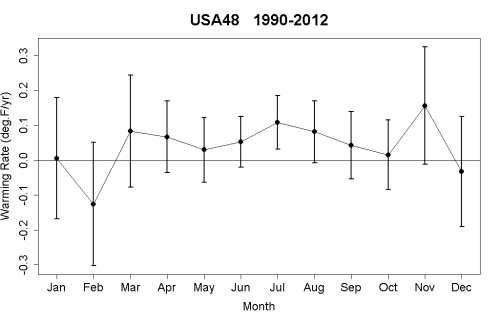 Let’s compute not monthly, but seasonal trends, defining winter as Dec-Jan-Feb, spring as Mar-Apr-May, summer as Jun-Jul-Aug, and fall as Sep-Oct-Nov. Then we can compute trends for single seasons, for all 50 states. Using the entire period of record (1895 to present), wintertime warming looks like this:

Dots are plotted on a “map” of the USA. Red dots indicate warming trends and blue dots (yes there are a few of them) cooling trends. Large dots indicate larger trends. Most of the country has shown winter warming, strongest in New England and the upper midwest (North Dakota warming fastest). There is one region, however, which has shown overall cooling, namely the southeast, where you’ll find the blue dots. But the blue dots are very small as the cooling is very weak (not even nearly statistically significant). Nonetheless, the southeast hasn’t shown the winter warming exhibited by the rest of the country.

For the spring season we get this:

The story is much the same as for winter, most of the country warming, especially New England and the upper midwest, with the southeast slighly cooling (but not significantly). 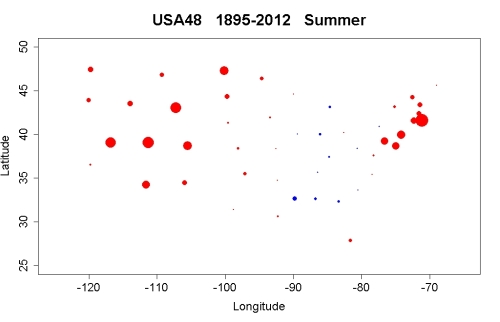 Much of the midwest, including the Ohio valley and Mississippi valley, show slight cooling. Warming regions show stronger trend overall than cooling regions, but now the warming area is split between New England in the east and the Rocky Mountains in the west. That same pattern also exists for the fall season:

We therefore see two distinct patterns. For winter and spring, warming is strongly dominant with only the southeast region not participating. During summer and fall the cooling region extends much farther north, and splits the warming part of the country into eastern and western parts.

Turning again to more recent trends, what has happened since 1990? Winter shows a very different story:

All 48 states except Maine and Vermont have cooled, the strongest effect in the midwest and southeast.

But instead of spring mimicking winter, it does a complete turnaround:

Now the midwest is warming strongly, with only the far west showing cooling.

The real cooking, however, has been happening during summer:

47 of 48 states show warming, only New Hampshire indicates cooling (and very weak at that). For the fall season the pattern is much the same: 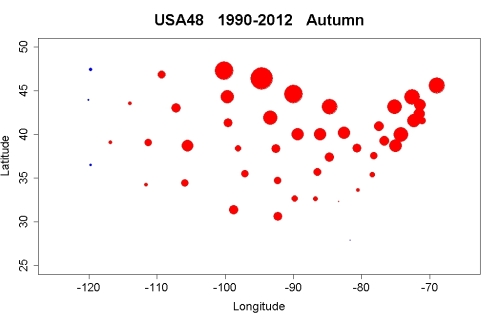 Over the last two decades, most of the USA has warmed during spring, summer, and fall — but cooled during winter. The eastern part of the country has shown stronger trends (both warming and winter cooling) than the west.

As for the future, regional predictions are very hard to make. If the recent pattern continues, we’ll see even more exceptional heat like we’ve seen this year (both during summer and spring) exactly where we saw it this year (over a very large part of the country, but mainly concentrated in the midwest). No matter how the regional pattern unfolds, over the longer term — the next several decades — we can expect more warming in the USA, and we can surely expect more warming over the globe. Nature has some surprises in store for us … but I don’t think they’ll be the pleasant kind.

We’re now at the point that extreme events like this summer’s heat wave, and even more so the heat wave this March, are just outside the bounds of what we’ve experienced before. Alas, it won’t be long before we see extremes that, frankly, we never dreamed possible. In spite of the fact that they will end the stupid arguments by making global warming simply undeniable, I’m certainly not looking forward to the dreadful days to come. It’s a pity that, through our own failure to act, we will have brought on ourselves the very wrath that will incite public outcry. It’s an even greater pity that it will happen so long after we were warned.