We can defeat the COVID-19 epidemic. We’ve already been shown how.

New York state was hard hit by COVID-19, and hit early by U.S. standards. Because of the incompetent federal response, nobody in the U.S. was properly prepared. Responding quickly, New York State took the tough steps that brought the disease under control. They even forced the outbreak down — they didn’t just “flatten” the curve, they crushed it. And they haven’t wavered, but have stayed the course, holding on to those measures that have enabled them to lower the daily case load from over 400 per day per million population, to under 30. 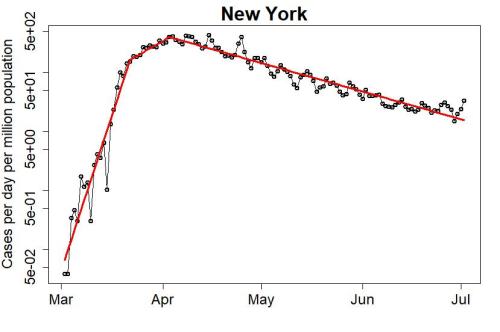 As crude as it is, it gives us realistic estimates. The early invasion grew with a doubling time (the time required for the caseload to double) of less than 2 days. Then the rate slowed, so the doubling time increased to over 9 days. Since early April, the case load has been in decline so the rate is negative, with a half-life (the time required to cut the caseload in half) of 19 days.

That means that, on their best behavior with full measures in place, it took New York state roughly 19 days to cut the case load in half. But unchecked, it took less than two days for it to double.

New York today: the average number of daily new cases per million population is under 30. That’s low enough that outbreaks can be detected early, and when they arise can be contained with contact tracting and quarantine. AND — perhaps even more important — the caseload is still going down.

That’s why New York state is actually ready to re-open IF they do it right, which means taking small steps and watching the numbers like a hawk. You have to be ready to re-close if some re-opening step goes haywire. A responsible state government must make it clear to the people that re-opening steps are conditional, and can be reversed at any moment. That’s what New York is doing.

Because with an epidemic as hot as COVID-19, if we get too close we’ll get scalded. Smart people start slowly. Dip a toe in the water — and be ready to yank it back if it burns.

California was also hit early, but the first wave didn’t explode as fast is in New York, taking almost 4 days to double rather than under 2. By the time measures were in place, they hadn’t gotten into nearly as much trouble as New York; in early April California was barely over 30 cases per day per million population. 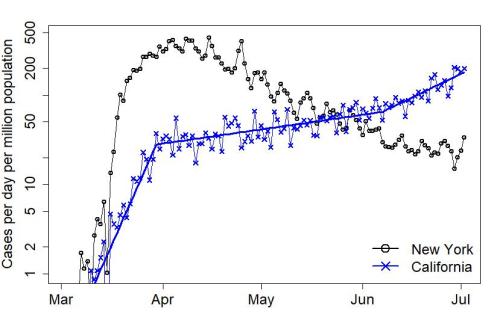 They certainly succeeded in flattening the curve. But they never made it go down. During April and May it was rising slowly, taking almost two months to double (doubling time 57 days), but it was still rising.

Then the re-opening steps kicked in, the rate got even faster, so lately the doubling time is a mere 17 days. The caseload got higher, even faster.

California lost ground by not forcing the curve down; during April and May they doubled the daily case load which put them in a terribly vulnerable position when re-opening. Re-opening has been too much, too soon. When once they had only a tenth as many cases per capita as New York, now roles are reversed. And California’s problem is still on the rise, while New York’s still falls.

Florida also was not hit early, and by early April was still around 30 cases per day per million population. Unlike California and Texas, they actually managed to drive the curve down — albeit slowly, with a half-life of 91 days. That’s still a decline. But their re-opening has been even more of a disaster than Texas’, with cases now rising with a doubling time of just 9 days. 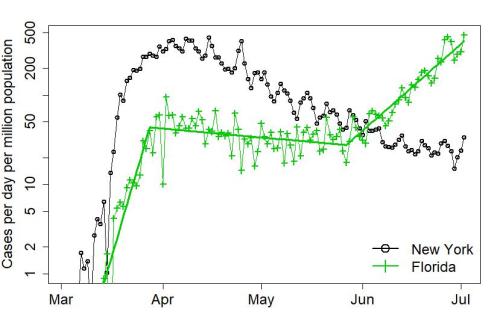 For comparison purposes, to smooth out some of the random fluctuations here are 7-day running averages of the caseload for all four states, plotted in the “ordinary” way (a linear scale rather than a logarithmic scale):

All four states have recently taken steps to re-open the economy. New York was ready, and still they’re proceeding cautiously, dipping a toe in the water to test things. California opened too early, they weren’t ready. Texas and Florida weren’t ready, but rather than go slowly they decided to jump in. Over their heads.

This entry was posted in COVID-19 and tagged COVID-19. Bookmark the permalink.