Global Temperature in the Air Up There

By the way: the idea that transforming satellite data into temperature estimates is as simple as sticking a thermometer in your ear (like they do in hospitals these days) is extremely stupid. It’s a lot more complicated than that, which is why different teams that process the satellite data get different results, and those teams keep updating their data with new versions that differ noticeably from previous versions. But it’s the kind of story that sounds convincing to idiots like Ted Cruz.


There are two main teams processing the satellite data: RSS (Remote Sensing Systems) and UAH (Univ. of Alabama at Huntsville). Let’s compare their global average TLT (Temperature in the Lower Troposphere) to what we get from radiosondes (balloon-borne instruments), for which I’ll use the global average data from RATPAC (Radiosonde Atmospheric Temperature Product for Assessing Climate).

First let’s figure out where the “lower troposphere” really is. Here’s a graph from RSS showing the “weighting functions” of the various products they produce:

The lowest of all (nearest the ground) is TLT (temperature of the lower troposphere), and it’s almost entirely below 10km altitude. That’s a pressure level of about 300 mb. That means that if we want to compare this satellite product with balloon data, we should use the RATPAC data for the range from 850 mb to 300 mb; that’s the one closest to the region the satellites cover (and it’s quite close, actually). Fortunately, RATPAC provides a global estimate for the 850-300 mb level, so that’s what we’ll compare the satellite data to.

Here are all three products, showing annual averages for each: 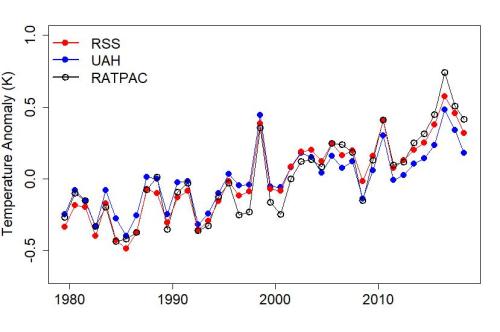 The data from RSS and RATPAC are pretty close. The “odd man out” is the UAH data, which shows a distinctly lower trend than either the RSS satellite data or the RATPAC balloon data.

We can also compare the differences between RSS and RATPAC, and between UAH and RATPAC: 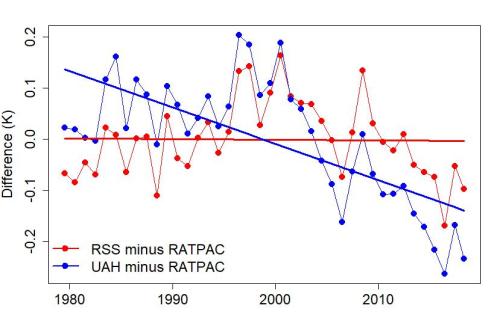 Yet for some reason Roy Spencer (one of the scientists who produces the UAH data) keeps saying that his product (UAH) agrees with balloon data better than the RSS product. I have grave doubts about how he pieces together the balloon data to make this comparison.

15 responses to “Global Temperature in the Air Up There”