Why use temperature Anomaly?


For the sake of those who really want to know: why do we use anomaly? What exactly is anomaly, anyway?

Suppose we want to know whether or not the climate in the state of Maine is getting hotter, colder, or showing no significant change. We might study monthly average temperatures from 1895 to the present (data available from NOAA, the National Oceanic and Atmospheric Administration). Here’s a graph of that data: 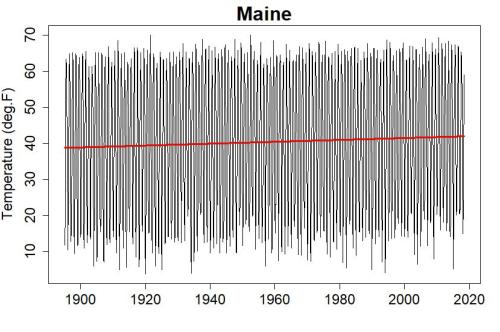 I’ve added a thick red line, which is an estimate of the linear trend using least squares regression. But the most obvious feature isn’t any trend, it’s the constant up-and-down seasonal cycle. In most parts of the earth winter is colder, summer is hotter, and Maine is no exception.

There are two interesting things about the trend estimate. First, it suggests an increase (getting hotter overall) at a rate of 2.6°F per century. Second, that result fails statistical significance tests (at the “de facto” standard 95% confidence). Conclusion: maybe it’s getting hotter at a pretty rapid pace — or maybe it’s not really changing at all, there’s just random fluctuation making it seem so!

Let’s try something different: let’s use just the data for the 124 Januarys in the data set. That looks like this:

Again I’ve included a linear trend estimate, but the thing is, this time it passes statistical significance tests. Not just at 95% confidence, at 99.5% confidence no less! Hmmmmm…

One way to do so, is to look at individual months separately as we’ve just done. Another way is to transform monthly averages to yearly averages. Those look like this: 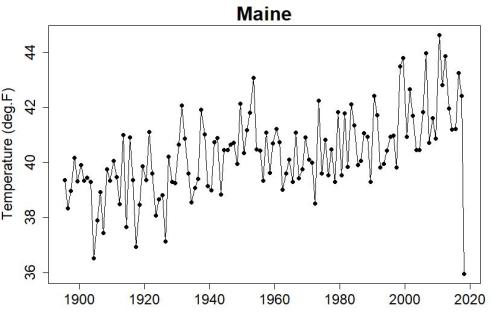 Whoa! What’s going on with that final data value, for the year 2018? It sure seems out of place.

We really should omit incomplete years from our annual averages, giving us this:

But … but … gosh darn it, I want that 2018 data! I want monthly data! Can’t I do it without having to resort to yearly averages, or having to do 12 separate analyses, one for each month? Why, yes I can.

To do so, let’s take each value for each month and subtract the average value for that same time of year (i.e. for the same month). This will give us anomaly values. Positive values indicate temperatures hotter than the average (for that month), negative values are colder than average.

Of course we have to decide how to define when things were “average.” The usual choice is to select a baseline period. For global temperature, NASA uses the period from 1951 to 1980 as their baseline, while HadCRU uses the period from 1961 through 1990. I’ll go with NASA’s baseline, and define “average” as the average for each month from 1951 through 1980. Then I’ll subtract those values from the monthly temperatures to compute monthly values of temperature anomaly, which gives this:

The estimated trend rate using linear regression (the red line) is 2.6°F per century, and the statistical significance is 99.9999999999% confidence.

The fact is — and yes, it’s a fact — that the seasonal cycle doesn’t affect the trend, it just interferes with our ability to measure the trend. By using anomaly values we eliminate the seasonal cycle without interfering with the trend. We also get to use monthly data, we don’t have to leave out the last six months just because the year-so-far is incomplete. All of which makes trend analysis so much stronger, we’d be fools not to do so.

But wait! There’s more! Using anomalies doesn’t just help us get the seasonal cycle out of the way. It helps us compare and combine different locations in a sensible way. After all, we don’t need to test whether downtown Portland, Maine is hotter than the top of Mount Katahdin — we already know that. What we really want to know is, has Mt. Katahdin warmed faster or slower than Portland? For that comparison, anomalies are tailor-made.

Or suppose we want to form an average for Maine based on those two locations, but Portland and Mt. Katahdin don’t have data for every month we’re interested in, some are missing — different missing months for different locations. If we just average raw temperature, then whenever Portland data are there but not Katahdin the average will be hotter just because we’re leaving out the coldest location, when we have Katahdin data but not Portland the average will be colder because it’s based on one of Maine’s coldest spots. But if we use anomaly values, we not only eliminate the changes due to the seasons, we eliminate the changes due to location. Then we can safely average values — missing values will make the averages less precise, but won’t make them downright wrong.

The fact is — and yes, it’s a fact — that using anomaly values helps eliminate many things that are irrelevant to climate change, and that makes us able to measure climate change with far more correctness and precision. Anyone who tells you different, is just plain wrong.

Now for the very interesting part. The analysis I’ve given is basically correct, but there are nuances involved. I won’t go into those here (don’t worry, they don’t invalidate the results) since, after all, this is a post about the very basic and very correct process of using temperature anomaly. Those who sincerely want to learn can find many resources; those who make bold assertions on topics they don’t understand, will probably never learn.

14 responses to “Why use temperature Anomaly?”