Deniers: Is This Really the Hill You Want to Die On?

The reason it keeps changing is that whenever they decide on what to bellow about, it quickly becomes obvious it’s not true. None of their claims is true. That’s no problem for them. Doubt is their product. 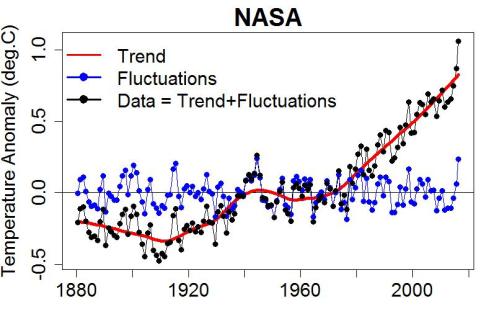 To make it look like there’s no warming, they have to isolate a brief span of time, one so short that the trend doesn’t have enough time to make itself obvious, so the fluctuations are all you really see. And they have to pick a time span when the fluctuations tend downward, to cancel out the appearance of the upward trend. You might try the span from 2001 through 2014, for instance:

A close-up shows that this time span is one during which the fluctuations tended to go opposite to the trend, essentially hiding the trend:

It’s what fluctuations do. They go sometimes up, sometimes down, and when they go up then go down it can look like a downward trend, cancelling out the upward trend. But fluctuations don’t persist. That’s why those who show you a tiny time span, don’t want you to see what led up to it — or what came after.

The same claim could have been made for the period from 1980 through 1994: 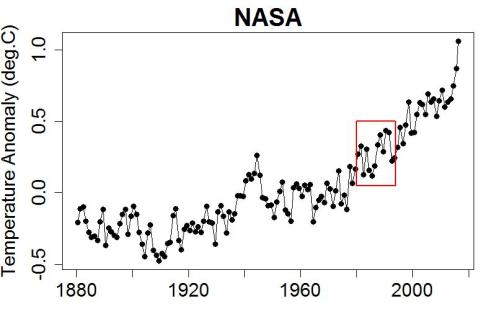 A close-up shows the same:

Alas for the poor climate deniers, the last two years both set new hottest-year records and 2016 is on its way to doing it again. The result is that the record of surface temperature makes it embarrassing to tell people there’s been “no warming since…”

Another embarrassment for them is that during the very time they like to crow about “no warming,” we’ve seen such a massive decrease in Arctic sea ice:

Then there’s the amount of heat in the ocean, rather than at the surface where we live:

There’s also the level of the sea itself, which has risen because global warming has melted so much land ice and because the sea expands as it warms:

There’s also the incredible rate of the loss of Greenland ice:

And the shrinking of the world’s glaciers. And the migration of species to higher latitudes and higher elevations. And the earlier arrival of spring. And earlier snowmelt. And more wildfire burn. And earlier breakup of the ice on frozen lakes. There are so many signs, only those in denial can deny it — and those signs have been clear during the “last 15 years” just as they were before.

But there’s still a little bit of data one can twist to look like maybe, if you hide most of it and squint while looking at it in just the right way, you can make yourself believe there’s been “no global warming for 15 years.” It’s the satellite data for the temperature in the lower troposphere from the University of Alabama at Huntsville.

That’s why, when politicians whine about “no global warming” they only show you that data. Not surface temperature. Not ocean heat content or sea level. Not Greenland melting or glacier disappearance or any of the other things that show how hot it’s getting. They only show you what they can manipulate to make their case … and generally don’t even show you all of it, they have to leave out what might provide context.

But they have a problem. A big one. It’s getting more and more obvious that their “no warming for XX years” narrative is bullshit. They picked that dialogue, and it’s going to end up killing them. The day will come, soon, when not even Donald Trump will be able to weasel his way out of the reality of man-made climate change.

Deniers: you picked this hill. For you … it’s not a good choice.

10 responses to “Deniers: Is This Really the Hill You Want to Die On?”