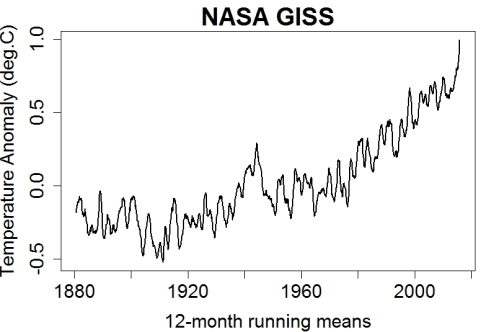 
Nevertheless, claims of a pause or slowdown have not only been made by some US presidential hopefuls. As recently as this February, a paper by Fyfe et al. in Nature Climate Change argued that a significant slowdown of global warming occurred in the early 2000s, specifically during 2001-2014. However, the evidence they present is not based on statistical analysis and makes a common error: the model they apply is unphysical in assuming a “broken trend” with a jump discontinuity at the start of the purported slowdown. Since this error is so common it is worth explaining it here.

Their trend analyses (including their Fig. 2 showing running trends) all make the unstated assumption that trends are unconnected, i.e. “broken” trends as shown in Fig. 2 (a) below, corresponding to a model where phases of linear warming are interrupted by sudden jumps in temperature. Their claim is thus not merely that warming was slow during 2001-2014, but that the global temperature jumped up in 2001 to start this slow warming period at a warmer level.

An appropriate method to check for trend changes in time series is change-point analysis [2]; in this case that involves modeling the data as a continuous piecewise linear trend. Several studies unfortunately not cited by Fyfe and colleagues) using change-point analysis have found that there has been no significant change in the rate of global warming since ~1970.

Fig. 2 (b)-(f) show global surface temperature time series assuming a trend change at the start of 2001 and computes trends from 1972-2001 and 2001-2014 (as in Fyfe et al.) but without discontinuities, i.e. keeping the trend lines connected. The trend change at 2001 is minimal, particularly considering that 2001-2014 was hand-picked for its low trend. The difference is biggest in the data sets which are not fully global (HadCRUT4.4 and NOAA-Karl) but exclude the data-sparse Arctic, where disproportionate warming has been observed since ~2000 [5].

In no case is the trend change statistically significant. We should perhaps mention why this matters and what the lack of significance means. Essentially it means that when taking into account the “noise” in the data (the short-term wiggles), the differences in trend are not robust. For example, just picking slightly different start and end dates will give different results. That is illustrated in Fig. 3, where we added one year at either end to the supposed “slowdown period” claimed by Fyfe and colleagues. How meaningful is it to say that the warming was slower than usual over the period 2001-2014, but faster than usual over the period 2000-2015? Right. Not at all. Both claims are technically correct, but the fact that neither is statistically significant tells us not to attach too much meaning to them, since it’s “all in the noise.” That is exactly what significance tests are for. 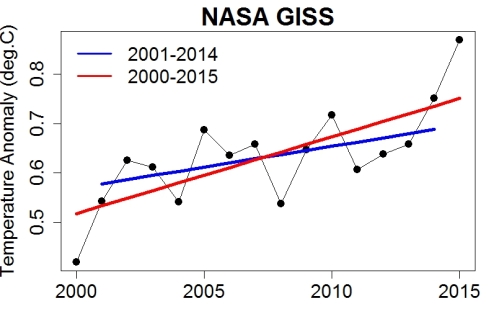 Figure 3. Trend rate of annual average global temperature, comparing the results from 2001 through 2014 (in blue) to that using a single additional year before and after, from 2000 to 2015 (in red).

Now some people might say: but the real slowdown was during 2001-2012, not 2014. But that is likewise not statistically significant, and this has been tested and published in the peer-reviewed literature. Here’s how the change point analysis studies mentioned above work: they test trends for all possible combinations of start and end dates and look for points with significant trend changes (these are called change points). The last change point found in global surface temperature data occurred before 1980. Since then no significant trend change has been observed.

We conclude that the early-2000s global warming slowdown is greatly overstated by Fyfe et al. Their central claim that “the surface warming from 2001 to 2014 is significantly smaller than the baseline warming rate” (1972-2001) is falsified by the statistical analysis discussed here.

The table below lists the rates estimated for the 2001-2014 time span using a “broken” trend as in Fyfe et al., and the more physical choice of continuous trend, for the data used in F16 and two others: those from Cowtan & Way based on HadCRUT but interpolating data-sparse regions by Kriging [6], and the land+ocean temperature from the Berkeley Earth Surface Temperature project [7].

It also gives the p-values for a trend change having occured at 2001, based conservatively on an F-test (assuming white noise), hence without considering the additional degree of freedom in the choice of when the trend change occurs. Even without this correction the p-values fail to reach statistical significance at 95% confidence; the proper change-point analysis raises the p-values further. Omitting 2014, or both 2013 and 2014, does not change the lack of statistical significance. Note that even using the questionable approach of Fyfe et al. with broken trend lines fails to yield a statistically significant trend change, not even for the data sets that ignore the Arctic.

P.S. Here is an additional figure, which is the same as Fig. 2 above but computes a seperate trend for 2000-2015 rather than for 2001-2014. As you can see, there is no more sign of any slowdown except in HadCRUT4, and for the data from Cowtan & Way there is now a slight (not statistically significant) increase in slope. This illustrates what the lack of statistical significance signals: the “slowdown” is not a robust feature, as just adding one year at either end of the slowdown period highlighted by Fyfe et al. makes it disappear completely. (This was the originally intended Fig. 3, which due to a misunderstanding was missing at first as several of our readers noticed.) 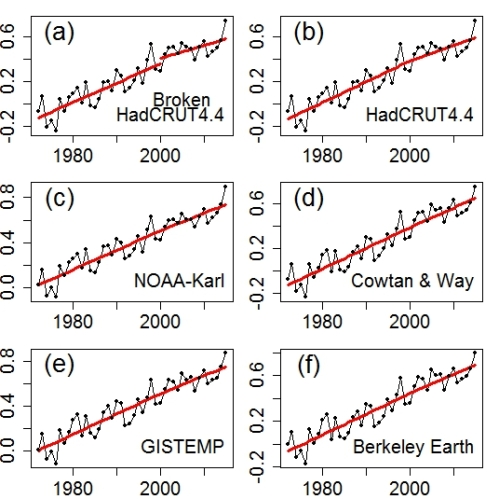