Anybody can do it.

Fake “skeptics” of global warming do it all the time. One of the latest and most extreme — this one is a real doozy — comes from John Coleman. Of course it’s regurgitated by Anthony Watts.


Coleman tells us this:

However, skeptical scientists have produced studies that show that the last 15 years have seen a cooling in the United States. This is the NOAA NCDC Climate at a Glance US annual mean temperature trend the last 15 years. 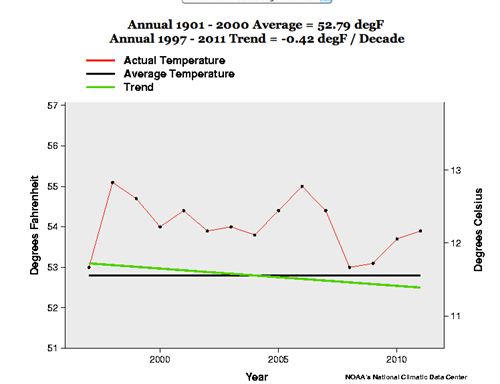 Here’s all the data from the National Climate Data Center (the source for Coleman’s graph), together with Coleman’s trend line in blue, and dashed lines showing the time span chosen (click the graph if you want a larger, clearer view): 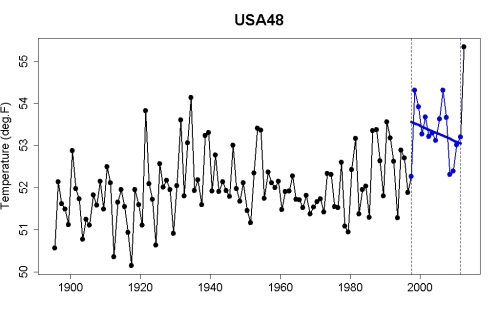 Why, do you suppose, did Coleman pick that particular set of data for his “trend”? Answer: Because it gives him what he wants.

When you choose your data because it gives you what you want, you’re cherry-picking.

Here, in red, is an analysis using all the data: 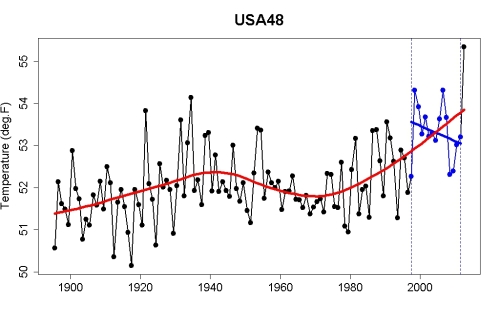 Coleman’s choice is so very, very cherry. It’s championship cherry. Olympic cherry-medal cherry. He should be nominated for “cherry-picker of the year.”

But let’s not think him clever for finding this juicy little over-ripe cherry. Remember that cherry-picking is oh so easy. Anybody can do it. Fake “skeptics” of global warming do it all the time.

How easy is it? Suppose you had some temperature data, say 40 years of annual averages, which was just plain random noise. No trend. Not even any autocorrelation. Plain vanilla bland random white noise.

If you analyze all of it, looking for a trend going either way (warming or cooling) by applying linear regression, insisting on 95% statistical confidence (i.e., insisting on a p-value no more than 5%), then there’s a 2.5% chance you’ll find a downward slope — a “false positive” cooling if you will. There’s also a 2.5% chance you’ll find an upward slope — a “false positive” warming if you will. So there’s a 5% total chance you’ll find a “statistically significant” slope even though there really isn’t one, it’s just a fluke due to random noise. Heck — that’s what “95% confidence” (a 5% p-value) means.

But you want to show that there’s a cooling trend. Not warming. Just cooling. You insist on it. By the usual method, you’ve only got a 2.5% chance of getting what you want. It turns out, just by unfortunate accident, that you didn’t get that lucky 2.5% result. Your raffle ticket just wasn’t the winner this time. Sad Panda.

Solution: don’t use all of the data! Instead, try starting with the 2nd year instead of the 1st. If that doesn’t work out, start with the 3rd year instead of the 2nd. If that doesn’t work out … well, you get the idea. Try all kinds of different start years until you get what you want. Persistent Panda! Wouldn’t that give you a better chance of getting what you want?

Yes. Yes, it would. Although doing it the honest way only gives you a 2.5% chance of getting what you want by sheer dumb luck, when you’re allowed to pick the start year because it gives you what you want, you’ve got a 21.3% chance to get lucky. It’s like taking 8.5 raffle tickets when you only payed for one.

Some bunnies might protest that taking 8.5 raffle tickets when you only payed for one is not the honest way.

But wait! There’s more! Seein’ as how you didn’t require yourself to start at the start, why force yourself into a corner by having to end at the end? Why not let yourself leave out the final year if that happens to make it harder to get what you want? Hey, it’s only one year. Who’s going to quibble about one single year?

Now you’re allowed to pick the start year you want and to leave out the final year if that makes it easier to get what you want. In consequence, even though the data are nothin’ but noise, you have a 28.6% chance to declare “statistically significant cooling”! This is terrific!!! It’s like taking 11.4 raffle tickets, even though you only paid for one.

Some bunnies might protest that taking 11.4 raffle tickets when you only payed for one makes you less-than completely honest Panda.

But wait! There’s more! Maybe even after you try all the start years, and leave out the last year if it doesn’t go your way, you still don’t get what you want. Guess what? That’s not the only raffle in town! If this temperature data set doesn’t agree with your story, try another. Or try sea ice data. Or sea level data. Or glaciers. Or — keep looking through data for all the world’s glaciers until you find one that you think looks good. Or, just wait for an especially heavy snowfall, somewhere, some time (winter is your best bet) and declare that you’ve found “cooling.”

It’s kinda like paying for one ticket in one raffle, then taking 11.4 tickets from every raffle. Hundreds of tickets — thousands — you’re sure to have a winner somewhere! If, a few years later, that ticket no longer pays off, switch to a different raffle.

John Coleman isn’t the only one playing this game. Most if not all of the fake “skeptics” do it. Regularly. The latest incarnation is the “16 years of no warming” meme. They’re playing it to the hilt. But it’s just cherry-picking — they picked the data because it gives them what they want. In a year or two, when that game no longer pays off, they’ll switch to another raffle.

Or you could do like John Coleman did. Even after picking the start year you want and leaving out the final year, when you still don’t get a supposedly “significant” result — call it “cooling” anyway.

41 responses to “Cherry-Picking is Child’s Play”