A post by Anthony Watts at WUWT claims to be a “fact check” about ocean heat content. Alas, Willard Tony didn’t check his “facts.”


Watts shows us this graph of Ocean Heat Content anomaly for the top 700 meters of the ocean according to the Pacific Marine Environmental Laboratory (PMEL), estimated from in situ data according to Lyman et al. 2010, and adds this comment:

Sure looks like a pause to me, especially after steep rises in OHC from 1997-2003. Note the highlighted period in yellow: 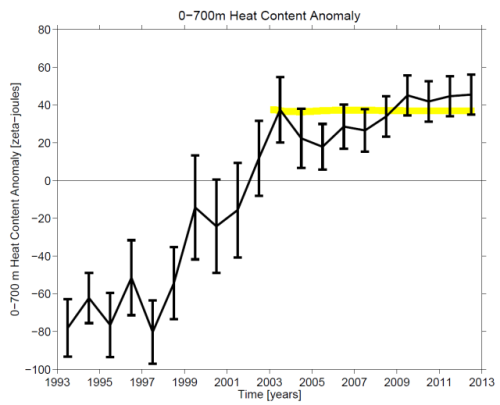 As for Watts’ choice of start year, I’m tempted to say it’s a blatant cherry-pick. That’s when you pick the data because it gives you what you want. We already know that cherry-picking is child’s play.

But it’s not really cherry-picking at all. It’s rotten-tomato picking. Then he calls the rotten tomato a cherry.

Let’s give the baby his bottle. Go ahead, use the PMEL data. Go ahead, leave out ocean heat content below 700 meters (even though we have data down to 2000 meters). Go ahead — start with 2003. Let the baby have everything he picked himself.

Then let’s look closely at his “Sure looks like a pause to me” claim.

Here’s the data — ocean heat content anomaly for the upper 700 meters only, according to PMEL, leaving out everything prior to 2003 — together with that lovely yellow line which Willard Tony added to make it look more like a “pause”: 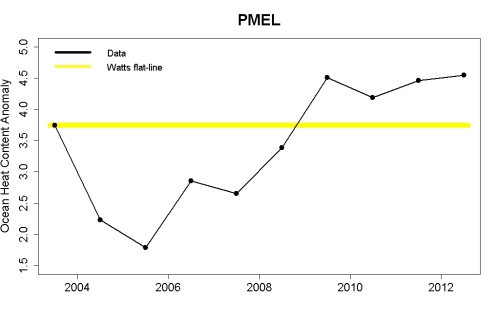 Graphically, they tell us this: 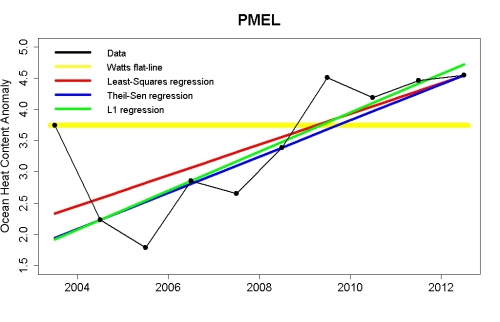 Numerically, they tell us that the upward trend — the warming of the top 700 meters of the world’s oceans — the trend that shows “pause” to be a lie — is statistically significant. According to all of them.

This is the problem with today’s discussion of global warming. The fake “skeptics” of global warming do this all the time. It’s their modus operandi. Cherry-pick the data, include only what gives you what you want because it gives you what you want. If you must do some actual analysis, keep trying different data sets and different time spans until you get what you want. Or, don’t even bother doing any analysis at all. Just say “Sure looks like,” draw a flat line, and declare it to be a “fact-check.”

This is the pathetic standard to which they hold themselves.