Two fake skeptics of global warming, Willie Soon and Nils-Axel Morner, have written a commentary in the Washington Times about sea level rise in which they use the most shoddy “science” imaginable to claim that sea level rise data is based on shoddy science.


In particular, they attempt to discredit sea level data based on tide gauges. That claim is based on the “work” of Cyril Galvin, who apparently told them quite a story:

While examining tide gauge records from Atlantic City’s Steel Pier, Mr. Galvin discovered a remarkable effect apparently caused by spectators who came to watch horse-diving between 1929 and 1978. From old photographs, it was estimated that there must have been about 4,000 spectators who would come to watch. Given that this crowd probably weighed about 150 tons, the pier was subject to significant loading and unloading cycles. The initial 1912-1928 data showed the sea level rising at a rate of 0.12 inches per year. The rate tripled around 1929 when the horses began diving. When the shows were suspended from 1945 to 1953, sea level fell at a rate of 0.06 inches per year. When the diving resumed, the sea level rose again at a rate of 0.16 inches per year.

If we look at tide gauge data for Atlantic City from Permanent Service for Mean Sea Level, we see that there was indeed a brief slowdown from 1945 through 1953 after a rapid rise from 1929 through 1944:

What might have caused such a fluctuation? Could it be the weight of the massive crowd, spurred on by immense horsepower? If so, the crowd must have been even bigger than those old photographs suggest, because their impact was felt far beyond the confines of Atlantic City. The same pattern is evident in tide gauge data from Charleston, South Carolina:

You can see it at Pensacola, Florida:

Hell, you can even note the same pattern all the way to Galveston, Texas! 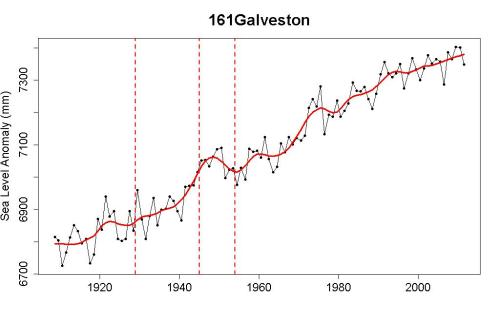 Curiously, Cyril Galvin wrote a reply to a book review in which he talks about how “The differences reflect compaction of sediment under the gauges, geological uplift, El Niño, and other natural factors that must be separated out.” Evidently these known natural factors weren’t enough to satisfy him about Atlantic City, he decided instead to invoke the horse-diving effect.

Galvin also complains about the difference is sea level change patterns between the Atlantic and Pacific coasts of the U.S. Evidently he isn’t aware that when you account for those known, natural factors there is a clear pattern of consistent sea level rise throughout the 20th century. Apparently it takes actual scientists who study sea level to do that. He also seems unaware that there are indeed differences in sea level rise between different ocean regions, for a lot of reasons, including changes in wind and current patterns and the changing gravitational field of the earth as the melting of land ice redistributes mass around earth’s surface. I’m a little surprised that Galvin missed the latter effect — he should have taken into account the gravitational field caused by the mass of all those spectators watching horse-diving in Atlantic City.

In addition to slandering the sea level record based on tide gauge data, Soon and Morner regurgitate the now-morbid meme about the absence of acceleration in sea level rise according to such ludicrous work as that of Houston and Dean. One of the perennial favorites of global warming deniers is a truly idiotic treatment of sea level rise acceleration, one we’ve dealt with repeatedly on this blog.

The real story here isn’t about sea level. It’s about how completely, totally, stinkingly obviously wrong is the essay by Soon and Morner. It’s an insult to the intelligence of any thoughtful reader, to pass off such claptrap as though it were actual science. If this is what global-warming deniers think people will actually swallow …