One of the difficulties studying changes in the frequency and intensity of cyclones is that the record of past storms is inhomogeneous, due to changes in observational capabilities and how storms have been measured and recorded. But a new paper by Grinsted et al. has found evidence of past cyclone occurrence in the western Atlantic which impacted the U.S. east coast, evidence which is homogenous over a period of nearly a century, by studying not storm records, but surges in sea level recorded at tide gauge stations.


Cyclones bring strong winds and low pressure, so they can create a notable surge in sea level when they pass near, or over, a tide gauge station. In fact this “storm surge” is one of the most dangerous effects of hurricanes, especially if the storm strikes at high tide, because it floods the coast, one of the deadliest aspects of cyclones. Therefore not only does the tide-gauge record of surge indicate the close approach of cyclones, it gives an indication of the storm’s impact on the U.S. itself and of its destructive potential.

Grinsted et al. studied tide gauge data, specifically, research-quality data from UHSLC (Univ. of Hawaii Sea Level Center), to look for signs of storm surge which would mark the passage of strong cyclones. The real advantage of this method is that tide gauge records in many locations cover a longer period of time than reliable storm data, and are entirely consistent from one time to another. They used data from these stations which cover the Atlantic and Gulf coasts of the eastern U.S.: 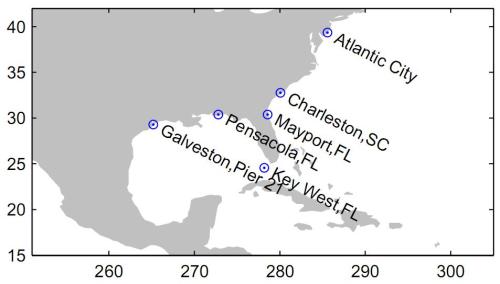 Working with daily tide gauge data, they computed the difference from each day to the next. The square of this quantity is a measure of “surge,” for which high values can indicate the near approach of a cyclone. They also computed the total “surge index” for each year, and the number of strong surge events for each hurricane season. Then they looked for patterns over time, and differences between warm years and cool years.

The overall results are summarized in their figure 1:

The graphs show surge index during the storm season (July through November) and the number of large surges per year. It also shows, for comparison, the US-ACE (Accumulated Cyclone Energy of U.S. landfalling cyclones) and the global temperature from NASA GISS.

The surge index shows its largest values during the 2000s (especially the monster year 2005), but also showed large values during the very active 1930s. Also, there’s no statistically significant overall trend (which doesn’t mean there’s no trend, but if there is it hasn’t yet risen above the noise level). The number of large surge events has, however, shown a statistically significant rise since the beginning of the study period (1923).

Grinsted et al. also note a strong correlation between storm surge events and temperature. They fit generalized extreme value (GEV) distributions to data for warm and cool years separately, and found that the risk of Katrina-magnitude events during warm years is double that during cool years:

We observe that warm years are more active than cold years and that the relative difference in frequency is greatest for the most extreme events. The separate GEV fits suggest that events of Katrina magnitude are approximately two times more frequent in the warm years than in cooler years (Fig. 3). This increase is significant at the 98% confidence level (Methods).

I was of course curious to know just how prominently major storms stand out in the tide gauge data. Grinsted et al. give an example, showing their surge index for the monster hurricane year 2005:

Their record clearly indicates the presence of 5 named storms from that year: Arlene, Dennis, Katrina, Rita, and Wilma.

I was also curious to know whether using daily data might compromise the result, because if a storm has its strongest impact at midnight for a particular tide gauge its peak effect will be spread out over more than one day and may therefore be diluted. So, I downloaded hourly data for the tide gauge at Key West.

Hourly data have the additional complication that they record quite strongly the tides themselves. So, for each year of data I fit a multi-frequency Fourier series, determining the frequencies which gave the best fit, to define “anomaly” values. This doesn’t eliminate the tides altogether, but does reduce them sufficiently to allow surge events to stand out from the background.

The plain old raw data (not anomalies) from Key West for the 2005 season look like this (click the graph for a larger, clearer view):

Note that the tidal cycles do indeed make surges more difficult to identify. Note also that some events (e.g. Rita) show up in the tide gauge record before their landfall date, because Rita passed by Key West several days before it made landfall in Texas.

Note also that there’s no clear sign of Arlene or Katrina. Using anomaly instead of raw sea level reveals that for the Key West tide gauge station, Katrina was obscured by the tidal cycles:

Its passage is now evident, several days before it made landfall in New Orleans.

But there’s still no sign of Arlene, even though it’s listed in Grinsted et al.’s list of 50 strongest surge events. I suspect it simply doesn’t show at Key West. Arlene was only a tropical storm, it never achieved hurricane strength, but it shows clearly and strongly in the record of Grinsted et al. because it made landfall at another of the stations they included, Pensacola, FL.

The passing storms show quite clearly as large increases in the sea level, above the longer-term values and above the cycles of the tides. So I decided to form my own “surge index” by first smoothing the data on a 15-day time scale: 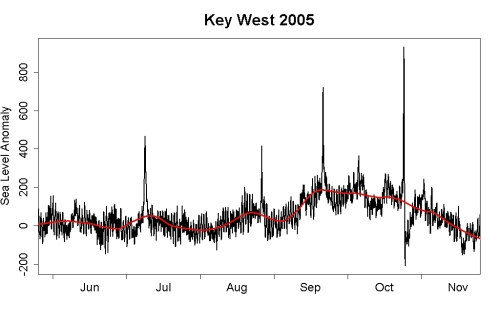 Then I took the residuals from this smooth, squared the positive ones while setting the negative ones to zero. This gives an alternate surge index which looks like this:

From this, it’s obvious that yes, the tidal surge from cyclones passing near the U.S. leaves a clear mark on the tide gauge record.

In my opinion, Grinsted et al. have identified an important and reliable indicator of landfalling storms in the U.S. southeast, and have found clear (and statistically significant) evidence of increase in activity over time and association with warmer temperatures. As the world continues to warm, expect the trends to continue.