Wet is Dry and Dry is Wet

Over at RealClimate, reader “Dan H.” insists that there’s no notable increase in worldwide drought. He’s also been pushing his idea that global temperature is following a modest warming trend of only 0.06 deg.C/decade, but we’ve already dealt with that.


When pressed for evidence, Dan H. provided some interesting links. The interesting part is that the evidence he provides against increased drought, isn’t.

He first links to some graphs covering Texas, indicating no long-term trend in drought. Texas covers less than 0.2% (1 part in 500) of the land area of the globe. That’s hardly a characterization of global drought.

Then he links to a paper saying “Rainfall in Australia is largely governed by ENSO.” Knock me over with a feather! We knew that already. What Dan H. fails to mention is that ENSO governs the fluctuations — but doesn’t account for any trend which might be present. Poor Dan.

But without a doubt the weirdest “evidence” he provides, and one of the most bizarre things I’ve ever seen in global warming discussions, is a link to this graph: 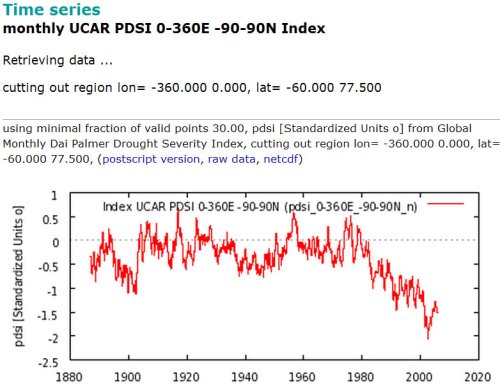 to claim that drought isn’t increasing. Doesn’t he see that this graph clearly indicates that drought has shown an increase, in fact a dramatic increase, since about 1980, even compared to conditions throught the 20th century? But Dan H. seems to think the opposite. Where could he have gotten such an idea?

The graph comes from the “icecap” website. Here’s what they have to say about it:

A plot of the worldwide data for the Palmer Drought Severity Index shows that there has been an unprecedented decrease in world drought severity over the past 30 years, possibly due to the plant enhancing increase of CO2.

Y’know, they really should have read up on this stuff before posting such nonsense. That goes for Dan H. too.

As the website for UCAR (source of the data) states:

What’s the important lesson here? That this is what we’re up against. To convince the public that global warming is a real problem, we have to counter arguments from people — and from websites which exist to spread misinformation — who won’t even bother to learn the most basic facts — like, for instance, that negative PDSI means more drought, not less.