As many of you know, nine months ago I predicted the minimum Arctic sea ice extent for 2011 would be 4.63 +/- 0.9 million km^2. I’ll update that prediction using more recent data from NSIDC.


The earlier model predicted the September average using a model based on time evolution. In particular, it used a quadratic model:

Fitting the model to observed September averages, then extrapolating one year into the future, gave the prediction 4.63 million km^2.

We now have monthly average data for both extent and area of sea ice through the first six months of 2011. Can these data improve the prediction? I first tried including an additional variable, the monthly average extent for June:

is the monthly average for the preceding June. This gives a slightly lower prediction, 4.58 +/- 0.9 million km^2, but the coefficient of the June average extent is not statistically significant. Furthermore, the AIC (Akaike Information Criterion) for this model is worse than that for the original model. So, I don’t put much stock in this refinement.

Then I tried using the June average, not of extent but of sea ice area:

is the monthly average area for the preceding June. This time, the coefficient for the additional term is statistically significant and the AIC of this model is better than that of the original model. The prediction based on this improved model is 4.57 +/- 0.72 million km^2.

Finally, I tried a model using both the area and extent of the preceding June:

Both new coefficients are statistically significant, and the AIC for this model is the best yet (but not much better than the preceding model). Its prediction is for an upcoming September average of 4.66 +/- 0.66 million km^2, which is only slightly different from the original prediction of 4.63 million km^2.

RealClimate recently posted a discussion thread for Arctic sea ice. Several of the reader comments suggested that this year we’re likely to break the remarkably low 2007 value for sea ice extent minimum. Most of these prognostications are based on the fact that at present, extent is at an all-time low for this time of year and is still dropping fast (daily extent data from JAXA, 2011 in red): 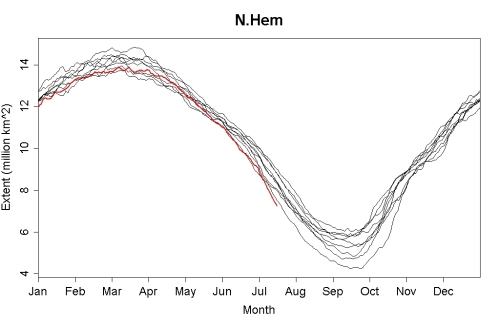 However, the coefficient of June extent wasn’t statistically significant. Furthermore, the June area is quite low, but not an all-time record for this time of year (daily area data from Cryosphere Today, 2011 in red):

It seems to me that the final model (using both area and extent from the preceding June) gives the best prediction, so I’ll go with 4.66 million km^2.

I’ll also point out that even with this model, the 95% confidence interval is still quite large (+/- 0.66 million km^2). So according to the model, it could be as low as 4.00 million km^2 or as high as 5.32 million km^2 and still be within the 95% CI. Clearly, what happens with the weather over the next few months will dramatically affect this year’s minimum Arctic sea ice extent.

Just as clearly, over the long term Arctic sea ice will continue to disappear. The trend continues.