USA Temperature: can I sucker you?

Suppose I wanted to convince people that temperature in the USA wasn’t going up, it was going down. What would I show? Let’s try yearly average temperature in the conterminous U.S., also known as the “lower 48 states” (I’ll just call it “USA”): 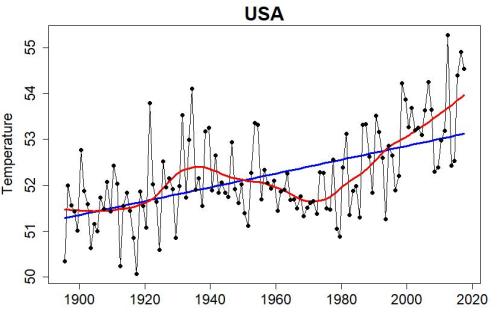 That won’t do either. Scary fast.

How about high temperatures?

That still won’t do, but it’s a little better. There’s a more pronounced hump in the 1930s — that’s the dustbowl era. Could I maybe make the most of that?

Let’s try this: look at high temperature during the different seasons of the year. After all, we know winter has been warming faster than summer, maybe summertime only — or maybe at least one of the seasons — will give a more useful “sucker people” picture. Here are the average high temperatures for all four seasons separately:

Now we’re getting somewhere! Summer high temperature has still been increasing overall, but that hump during the 1930s (the dust bowl era) is far more pronounced. Maybe I could make something of that?

Finally! I’ve got a graph that looks like there’s nothing to worry about, where the linear trend is so small you almost can’t tell it’s still (barely) rising, and I only had to pick one of 12 possible combinations (mean/high/low temperature over winter/spring/summer/autumn) and leave out the early data to get it. Clever.

Even so, the trend is still going up even if just barely. And that’s the linear trend; the nonlinear trend looks like it might be rising noticeably lately, maybe even getting close to as hot as the summer of the dust bowl era. Could I fix that?

Of course I can! Instead of using the USA temperature data from the “experts,” those people at NOAA (the National Oceanic and Atmospheric Administration) who think they’re so good at it just because they’ve spent decades studying all that “math” and learning how to do it “right,” I’ll just take the raw data and form a simple average. Those NOAA people will tell you that isn’t right, that over the years new stations have come online and old ones have retired so you have to take that into account. They’ll talk about fancy-schmancy math stuff like “area weighting.” That’s all just NOAA tricks, aren’t they just a bunch of frauds? We can completely ignore the fact that over the years the average location of all the contributing stations has moved slightly northward to colder territory: 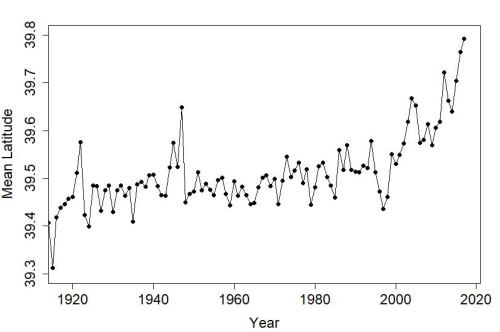 Heck we can completely ignore everything that they’ve learned about how to do it right … mainly because if we just take a simple, naive average we’ll get what we want. 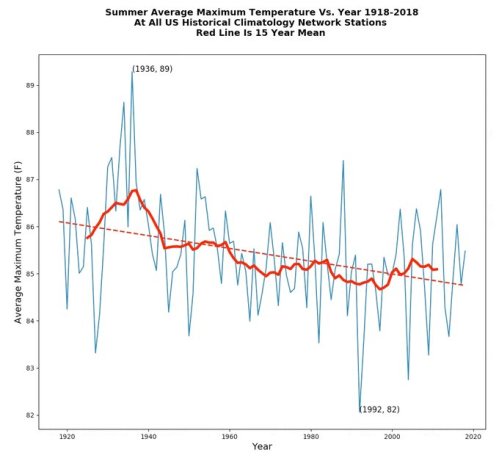 83 responses to “USA Temperature: can I sucker you?”