What if we wanted to use temperature data for the good old USA to show some good old American cooling? What data would we use?


If we use the whole-USA data from NOAA (actually the data for the “lower 48” states), that’s not going to be easy. The trend since 1895 (when the data begin) is warming:

The dots show annual averages, although the final one is highly uncertain since it only includes data for the first three months (the rest of the year isn’t available yet). Nonetheless, the trend is decidedly upward, as shown by the red line (a lowess smooth). The current rate (based on monthly data rather than annual averages) is over 5°F per century. Even if we use a linear trend, quite ignoring the fact that it’s warming faster now than before, we still get a rate of 1.4°F per century since 1895. Not cool.

Maybe we could do better if we focus on individual states. But which ones? Here’s a map showing the linear trend rates for all 48 states, with red circles warming, blue circles cooling, larger circles for larger rates:

Not good. Only two states (Alabama and Mississippi) show any cooling at all, and even the fastest-cooling (Alabama) is only at a paltry -0.35°F/century. Rhode Island, however, shows a linear rate since 1895 of warming at 2.9°F/century, twice the national rate.

How about we abandon the trend in daily mean temperature, and go for the daily high or low instead? We’ll probably want high, because nighttime seems to have been warming faster than daytime. Here are the rates for overnight lows:

Here they are for daily highs:

Well, we’re getting somewhere. Restricting to daily highs, Alabama is cooling at -0.7°F/century.

But it’s still not very impressive (as the map shows). Why not pay heed of the fact that winter has been warming faster than summer, and get rid of the wintertime data? Using just the summer months, and just the daily highs, we finally have something to work with: 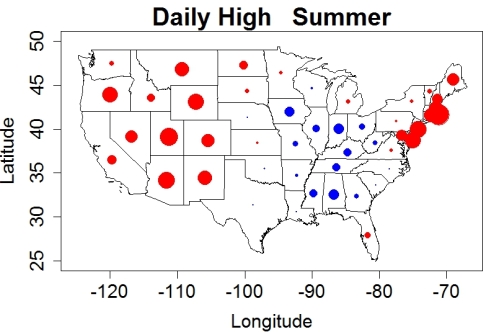 Recently John Christy and Richard McNider put together some new temperature time series to compare with climate model simulations. The only used locations in Alabama, only daytime high temperatures, and they used only data from summer months. What a coincidence.