But in my opinion, a much more accurate acronym would be “ICP” report — for “Intentional Cherry-Picking.” You don’t have to look any further than their “Summary for Policymakers” (SPM) to see cherry-picking taken to the extreme. And I do mean, extreme. One of the most obvious, most egregious, and frankly most ridiculous examples is Figure 4 from their SPM. It looks like this: 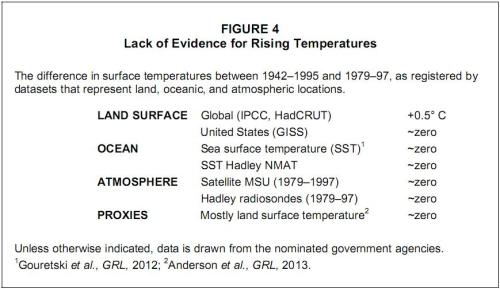 Here’s what they have to say when referring to this figure:

“… a wide variety of datasets other than the HadCRUT global air temperature curve favored by the IPCC do not exhibit a warming trend during the second half of the twentieth century. See Figure 4.”

Let’s find out whether or not their claim is correct.

The first thing to notice is that there’s a significant difference between what’s in the text of their reference to figure 4, and what’s in figure 4. Their reference says “during the second half of the twentieth century” but the figure says “between 1942-1995 and 1979-1997.” What they’ve done is take the time span from 1942 to 1995 and called that “the second half of the twentieth century.” It isn’t. It leaves out everything after 1995. Can you guess what happened in those datasets they refer to after 1995?

Incidentally, for two of the data sets (satellite MSU and Hadley radiosondes) they don’t start with 1942, instead they start with 1979. We can’t blame them regarding satellite MSU data because those don’t start until 1979. But the Hadley radiosonde data start in 1950. Isn’t that the very definition of the start of “the second half of the twentieth century”? And, they still end with 1997, which leaves out everything after. Can you guess what happened in those datasets after 1997?

The reason for their choices is blatantly obvious. The time spans were specifically chosen to minimize the observed warming, so they could claim “do not exhibit a warming trend.” There’s a name for the practice of leaving out data which contradicts one’s desired conclusion. It’s called “cherry-picking.” Make no mistake about it, this figure from the NIPCC ICP report is a great big blatant blob of cherry-picking.

What if we looked at these data sets without the cherry-picking? Can you guess what they show?

Let’s start with land surface temperature from the United States, specifically the 48 conterminous states of the U.S. I don’t have access to the data from GISS, but I do have it from NCDC (the National Climate Data Center) and it’ll give the same result. Here it is:

The red line is a smoothed version of the data. The dashed blue lines mark the time span used in the NIPCC ICP report. Notice what happened after the end of their time span?

If we use linear regression to test whether or not the rate of change is different from zero with statistical significance, then using just the time span in the NIPCC ICP report it turns out not to be. But using the data since 1950 (since the beginning of the second half of the 20th century), it turns out to be strongly significant. That, my friends, is why the NIPCC ICP report omits everything after 1995.

Next up: sea surface temperature. I don’t have the data from Gouretski et al. but I do have it from the Hadley Centre/Climate Research Unit (the HadISST2 data set). Here it is:

Notice what happened after 1995?

Once again if we use linear regression on data since 1950 (since the start of the second half of the 20th century) we find that the warming is statistically significant. Strongly so.

Now for the funny part — a real belly-laugh. If we use only the data from the time span chosen by the NIPCC ICP report, the warming trend is still statistically significant! 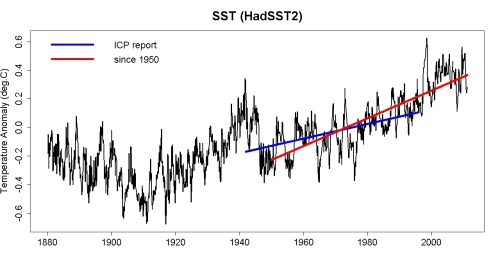 Next up is Hadley NMAT (nighttime marine air temperature). Unfortunately global average data for NMAT isn’t readily available, and I’m not willing to do all the work required to format and average the gridded data just to show how wrong the NIPCC ICP report is. They’re not worth it.

But it is easy to get satellite MSU data, globally averaged. Here it is from UAH (Univ. Alabama at Huntsville):

Notice what happened after 1997? 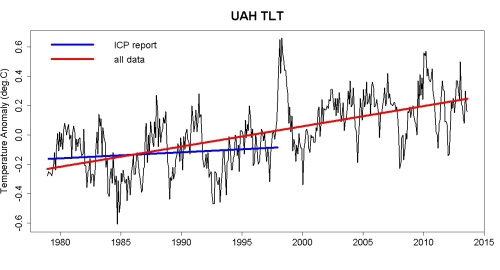 Finally we have radiosonde data from the Hadley Centre. They don’t say what atmospheric level they’re considering, but it makes sense to use the one nearest earth’s surface, which is the 850hPa level. And here’s that data: 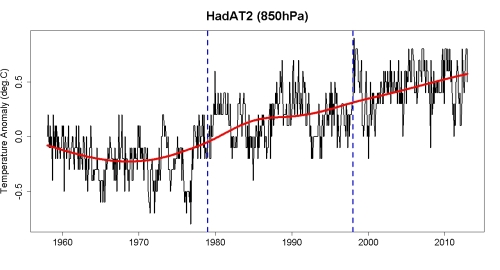 Look closely at that last graph. The blue line shows the data included by the authors of the NIPCC ICP report. Everything else, they left out. If there’s a more blatant example of cherry-picking, I’d like to hear about it.

The NIPCC ICP report is supposed to be the best, the most comprehensive, the most accurate representation of the truth about climate science that the so-called “skeptics” can muster. If this is the best they can do, then they’re not skeptics at all. They’re fake skeptics.

53 responses to “The ICP report”