Since 1975, global average surface air temperature has increased at a rate of 0.17 deg.C/decade (estimated by linear regression using either the NASA GISS or HadCRUT4 data sets). But the rate of increase hasn’t been perfectly constant over that entire time span.

As a matter of fact, there’s a 15-year time span during which the rate is notably different. Fifteen whole years!!! By at least one calculation, the difference is “statistically significant.”


Does this mean that global warming is wrong? That the computer models are utter junk? That this whole climate science thing is just a hoax, a nefarious scheme to cheat us all out of tax dollars in order to support the lifestyle of gaudy luxury that we all know scientists wallow in? (Science: money for nothin’ and your chicks for free…) 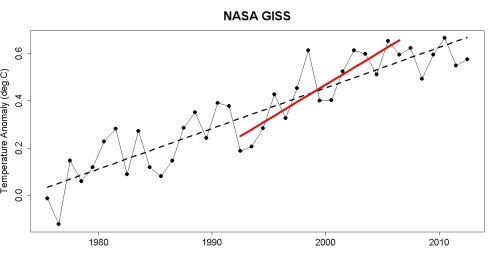 Just a few years ago, when Rahmstorf et al. (2007) compared climate observations to computer model projections, they noticed the faster-than-expected warming leading up to 2006. It was faster than expected and faster than projected by those dreaded “computer models” used by the IPCC. According to the data, global average surface temperature was on a “mad dash” to extreme heat.

How did these evil denizens of global warming react? Did they use that result to push world government based on socialism, so that they could destroy our economy by taxing the super-rich out of some of their hardly-earned riches? Did they run screaming through the streets yelling about how we’re all going to suffer spontaneous combustion by the year 2100?

No. Instead, they attempted to understand the result.

And what explanation, some bunnies may wonder, crossed their minds first? What was their first instinct regarding how this mad dash of global warming might have come about? This:

The first candidate reason is intrinsic variability within the climate system.

Wow. When the data indicated surface warming faster than expected, the first explanation offered by those greedy bastards was natural variation.

You missed your chance, guys. How ya gonna rob the super-rich of all their billions with that?

Since that time, when they failed miserably to capitalize on the opportunity for alarmism, there’s been another 15-year time span when the trend differed noticeably from the trend-since-1975. It covers the years from 1998 through 2012:

The evil cabal of climate scientists are somehow trying to explain this away as simply being “natural variation.”

But the poor, downtrodden “deniers” are on to them. They know the truth. You see, that extra-fast warming period really was just natural variation, but the extra-slow period is all because the computer models are junk, the whole climate science thing is just a hoax (gaudy luxury for scientists to wallow in), and we’re headed for decades of imminent global cooling.

After all, isn’t that what Aunt Judy would say? Didn’t she already say that “natural variability” was responsible for more than half of the global warming since the 1970s — but isn’t she now pushing as hard as she can that “the pause” is proof that we don’t really understand what man-made tampering is doing to our climate? Hey — it’s all just a “regime shift” anyway.

I think I finally understand the Aunt Judy/Willard Tony approach to science. When data says we have a problem, either it’s just “natural variability,” or the data are either faulty or fraudulent. But whenever data says we don’t have a problem — even if it’s just a single year’s data — voila! Scientific proof.