We recently pointed to another example of mathturbation brought to you by Anthony Watts, courtesy of Pat Frank (author of this travesty in E&E). A reader asked, “could someone post a paragraph or two about the specific flaws in the WUWT presentation.”


Actually, a number of comments have pointed out numerous, serious flaws already. But let’s take a close look at Frank’s model. His post is about fitting a curve to global temperature data, specifically those from NASA GISS and HadCRU. The chosen curve fit is a combination of a linear increase and a sinusoidal waveform. We’ve seen this before. It’s easy to fit a waveform to data. It’s not so easy to establish that the data are actually cyclic.

But Frank doesn’t even attempt to do so, there’s no statistics at all. Such effort would be futile, because of the simple fact is that there aren’t nearly enough “cycles” to show that global temperature is following a cyclic pattern. Even if there were, establishing cyclic behavior is very tricky.

Nonetheless, Frank charges ahead. He fits a linear-trend-plus-sinusoid model and gets this: 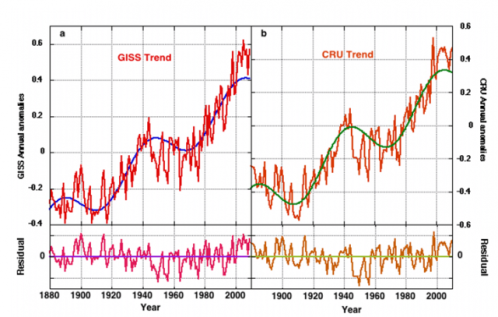 He then declares “The unfit residuals are shown below the main plots. A linear fit to the residuals tracked exactly along the zero line, to 1 part in ~10^5. This shows that both sets of anomaly data are very well represented by a cosine-like oscillation plus a rising linear trend.” As another reader pointed out, if you fit a linear+sinusoid model to some data, then the residuals will have zero linear slope. Necessarily. Whether the model is any good or not.

Let’s give the model a test, shall we? The “model” is that global temperature is following (and will follow!) a linear trend plus a sinusoid. Let’s do a classic test: estimate parameters by fitting the model to most of the data, then see how well it can predict what follows. Frank uses both GISS and HadCRU data, but let’s focus on GISS (the HadCRU data is just more of the same). We’ll compute the best fit for this model to GISS data from 1880 to 2000 (actually the end of 1999), then extrapolate the model through to 2010, giving this: 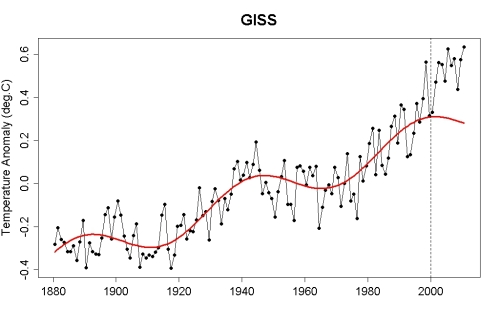 Does the model prediction have any skill? You make the call.

Let’s try a different model: that since about 1975, global temperature has increased approximately linearly. Again, let’s fit this model to data from 1975 to 2000 (actually the end of 1999), then extrapolate the model through to 2010, giving this: 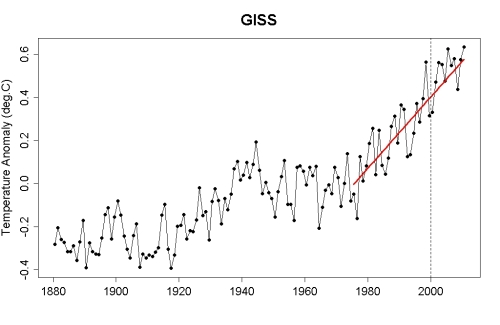 The residuals look like this (plotted on the same scale as the residuals from the previous model):

Which model did better? You make the call.

We can even fit Frank’s model to all the GISS data, then train a skeptical eye on the residuals. Here’s the model fit:

Here are the residuals:

Unfortunately for Frank (and the many other linear+sinusoid mathturbators), the fit really isn’t very good. But it does have zero linear slope! 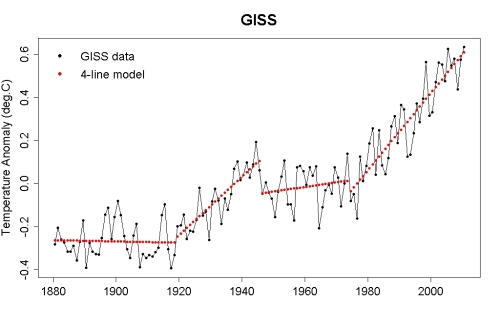 I will not pretend that this model is especially insightful, or that it will continue throughout the remainder of the 21st century, or that it enables us to estimate climate sensitivity. I certainly won’t claim that it gives us any insight about the danger (or lack thereof) we might face from a doubling, or a quadrupling, of CO2 levels.

But I will state that statistically, it’s a way better model than Frank’s. Here are the residuals:

Better or worse than what Frank got? You make the call.

We can also compare the models using the Akaike Information Criterion, or AIC. Frank’s model gives -222.72, the 4-line model gives -255.07 (yes, I included the three change-point times as parameters). Since lower AIC means a better model, the 4-line model wins. In fact, the difference between AIC values can be used to compute “Akaike weights” to be used if we want to compute weighted estimates combining information from both models. Relative to the 4-line model, Frank’s model has an Akaike weight just a smidgen less than one out of ten million.

Frank’s model has no physical basis. It ignores the known physics of climate including greenhouse gases, sulfate aerosols (both man-made and natural), solar variations. It fails the simplest test of predictive skill, miserably. It fails comparison to a ridiculouly simple multiple-lines model, miserably. His use of results to estimate climate sensitivity is, not to put too fine a point on it, laughable.

In other words, it’s perfect for the WUWT blog.